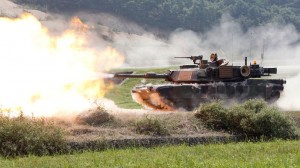 As clocks at the Pentagon approached midnight late Monday evening and inched America towards a government shutdown, the United States Department of Defense spent $5.5 billion dollars on an arsenal of items ordered at the last minute by Uncle Sam.

Foreign Policy reported on Tuesday that the Defense Department  awarded 94 contracts totaling over $5.5 billion a day earlier,  ensuring the mightiest military on Earth would stay significantly  well-stocked throughout an indefinite shutdown that has sent  hundreds of thousands of federal workers home without pay and  polarized lawmakers in Washington.

Comparatively, Foreign Policy’s John Reed noted that on September  3 — the first workday of the month — the Pentagon published news  of only 14 contracts: practically one-seventh of what was signed  off on as Monday’s midnight deadline seemed increasingly more  likely to come and go without a compromise.

The shutdown, now in its third day with no end in sight, is  costing the US an estimated $300 million in lost economic output  each day, according to research firm IHS Inc.

But as hundreds of thousands of federal employees remain  furloughed and national parks and programs stay shuttered  indefinitely, the Pentagon does not seem to have much to worry  about.

“This goes to show that even when the federal government is  shut down and the military has temporarily lost half its civilian  workforce, the Pentagon can spend money like almost no one  else,” Reed wrote.

Among those newest contracts are $2.5 billion to aircraft  engine-maker Pratt & Whitney for “spare parts,” $66  million for a new fuel pier at the Naval Base Point Loma and $7.5  million for a fleet of 60 Mercedes-Benz trucks to be used by the  US Africa Command.

Also on the ledger is over $15 million for bulk helium, nearly  $66 million on combat helmets and another $9 million for field  jackets to be supplied to the Afghanistan National Police.

Additionally, the Pentagon gave one contractor nearly $10 million  to repair a Defense Department gym. With upgrades, the facility  will receive new racquetball and squash courts, new floors, a  triathlon club, cross fit training space and – for some reason –  a television studio.

As RT recently reported, the Pentagon is expected to spend  upwards of $7 billion during the next year on sending supplies  out of Afghanistan as the US prepares to end the war which is now  in its twelfth year.