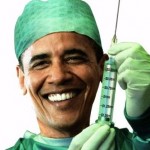 If you remember Obama made a promise in 2007 that his presidency would Fundamentally Change America. Well this is one promise out of MANY he is actually keeping and his promise is quickly becoming reality … BUT it is NOT the change you or I wished or hoped for and Obamacare is one of the prime movers of this fundamental change.

Obamacare is all about power, not healthcare and actually only helps a small percentage of the population. It pushes further into our private lives than any government program has ever attempted to do. It does this while striving to justify these actions on both moral and legal grounds, all the while raising cost and causing bureaucratic nightmares for most businesses and self employed individuals.

The individual mandate was defeated in the court of public opinion, so a repackaged concept resurfaced called by it’s softer name, the public option (there actually is no option). This does what the mandate was supposed to do, but utilizes a different mechanism of enforcement, federal taxes, once the supreme court stated that for it to be legal and enforcable, it had to be a tax (something they swore when selling it to the public it was not). Because the public option is tax-funded, it is a mandatory purchase that is even more difficult to get away from.

The bottom line in all this haggling and political power plays, and what will have serious effects on all our future healthcare, is the fact that Obamacare is primarily about extending the intrusion of the government so much further into our private lives. It’s desired goal is the advancement of the concept “the Socialization of America”, something we see in many of BHO’s policies.

Obamacare is one of the most unpopular programs ever presented to the American public and was only instituted through a massive campaign of lies, deceit and fraud, most of which is readily apparent as implementation proceeds. Yet it will eventually lock a vast majority of us into a dependency on our government for even the most basic healthcare needs and intrude into our personal lives on a unheard of scale, including gun ownership and mandatory RFID chips (ask some welfare recipients in Texas abouy that). This has the ultimate result of destroying what used to be the most advanced and effective medical care system on this planet, and the envy of the world, along with the usurpation of our remaining rights.

This program is by far the most destructive influencing factor today on the evaporating middle class as many employers stop hiring full time employees and shift full time positions to part time, or move their companies off shore to avoid the massive cost they will realize with the full implementation of this highly invasive program. This is a major player in the free fall of the average household income, forcing many more Americans to dependency on government entitlement programs such as food stamps and welfare. YUP a self perpetuating cycle. Do you really think by the way this administration fights viciously to push this program forward even in the face of it’s huge unpopularity, that this is a mistake, or unintended?

BHO, his masters and his cronies want a country that is dependent on the federal government for just about everything of consequence. To what advantage? Power and absolute control over each and every one of us! Subjugation comes in many shapes and sizes and not all have evil names or faces … that makes them no less evil!

A society functionally dependent on it’s government can never call itself free! WAKE UP !!!