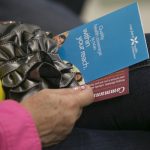 For all the acrimony in Washington over Obamacare, there’s an intriguing consensus around one issue: the ratchet effect. Neither side uses the term, but both the right and left treat it as an article of faith.

The term was coined by the libertarian economist Robert Higgs. In his book “Crisis and Leviathan,” Higgs described how the state takes on massive new powers during a crisis, usually wars. When the crisis subsides, the state relinquishes some of those powers, but it never gives them all back. This is how the state grows over time.

But the concept has broadened in recent years. On both the right and the left, there’s agreement that once you give people a new entitlement, they won’t want to let go of it. Government programs become so ingrained, even tea party protesters can hold signs saying “Keep government out of Medicare!”

Democrats insist the Affordable Care Act will join the sacred pantheon of programs, alongside Social Security, Medicare and Medicaid, and opponents say pretty much the same thing.

“If we don’t do it now, in all likelihood, Obamacare will never, ever be repealed,” Sen. Ted Cruz (R-Texas) said last month. “Why is that? Their plan is to get the American people addicted to the sugar, addicted to the subsidies.” Once that happens, he suggests, there’s no going back.

President Obama basically agrees. He even cites Cruz, boiling down the senator’s criticism to this: “The notion is, we’ve got to stop it before people like it too much.”

What ratchet effect proponents on the right and left get wrong is that popularity is overrated. For starters, popularity alone doesn’t justify a program. If Congress passed legislation giving every American a puppy plus $10,000 in cash, the program might be very popular, but that alone wouldn’t make it a good idea.

Many conservatives and liberals talk about the entitlement ratchet as if it’s an iron law of the universe. But there’s precedent for bad ideas — even entitlements — being modified or undone. In the 1990s, for example, Washington reformed welfare. In the 1980s, Congress dropped catastrophic health insurance like a hot rock.

And we shouldn’t assume that a majority of Americans will like Obamacare once they get to know it. Its list of unintended consequences is already long and still growing (just ask the administration officials listening to complaints from organized labor). If the program lives down to the promise of its website — already arguably the biggest IT disaster in American history — then you can be sure it won’t be popular.

But, again, popularity is overrated. The relevant economist on this point isn’t Higgs but Mancur Olson, who argued that modern societies tend to produce interest groups (also known as lobbies) that undermine the public good for private gain. Virtually everyone wants to get rid of mohair subsidies, but almost no one cares about getting rid of them as much as the subsidy’s recipients care about keeping them. Large majorities of Americans oppose racial preferences, but few are willing to take on the activists — and journalists — eager to demonize critics of such policies. Head Start doesn’t work very well, but it’s politically immortal.

The White House hopes that Obamacare will create a coalition of interests — including such diverse groups as people with preexisting conditions and hospital conglomerates — that will defend the law, regardless of the social costs.

Meanwhile, the supposedly addictive subsidies conservatives fear and liberals are pinning their hopes on don’t in fact go to individuals. They go to insurance companies. All consumers see is a discounted insurance plan that may or may not be less expensive than what they used to get or what they hoped to get. And millions of young people are likely to decide it’s in their interest to pay the fines and go without insurance.

I have no idea how it all will play out, but one thing is clear already: The fight didn’t end on Oct. 1. It heated up.