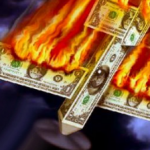 The U.S. Treasury warned Thursday that a default on U.S. debt “would be unprecedented and potentially catastrophic”, with a more serious impact than the 2008 financial crisis. “The credit market could freeze, the dollar collapse and U.S. interest rates skyrocket leading to a financial crisis and a recession that would recall the events of 2008, or worse,” the Treasury reported, two weeks before the deadline of October 17, when Congress must raise the debt ceiling under penalty of the United States debt default.

“As we have seen, two years ago, the prolonged uncertainty about whether our nation will pay on time and in full its financial obligations will hurt our economy,” also said Treasury Secretary Jacob Lew said in a statement.

“Delaying raising the debt ceiling until the last minute is exactly what our economy does not need,” he added..

Congress has the prerogative to raise the debt ceiling in the United States, currently at $16.700 billion, and the politicians refuse to do so, in an intense battle over the U.S. budget.

In the summer of 2011, a previous political deadlock on the debt ceiling had paralyzed Washington, leading ratings agency Standard and Poor’s to deprive the United States of their prestigious “AAA”, guaranteeing maximum credit for financial markets.

The United States will default on their debt in one way or another. Since 2008, the United States has conducted a single policy: save time. By preventing creditors to abandon the dollar, avoiding the disconnect between oil and the dollar, manipulating the Precious Metals prices and discrediting other currencies.

This is a teaching of History: outstanding debts are never honored. They are either repudiated or destroyed, eradicating in its path, freedom, economic viability and social stability.

Over time, the so called democratic societies bought social peace with what one might call a “Communist premium risk” consisting in increasing wages, social transfers, security, job creation, all of which made the existing social order legitimate. The accumulation of debt out of thin air, its corollary rising inequality and unemployment make this now an outdated solution. We can not continue.

Already the IMF austerity policy is floundering. It is rejected by the United States and it is increasingly being challenged in Europe. Specifically, it is being pushed away day after day, postponing quietly deadlines.

This monetary system is terminal; one might even say that on the scale of history, it’s on its last moments. The whole world can not live forever, flooded with liquidity. One day or the other, it will leave these unconventional monetary and fiscal policies, a system that built themselves their own limitations.

Ultimately, and it is actually the case, the demand for a more balanced and satisfying monetary system that better reflects the situation and rapports of global forces will emerge. A system that will reflect reality and not the current scheme that came straight from the Second World War agreements, playing the kick the can game ever since, A system that will take advantage of advances in science and technology and put it at the service of men. A system guaranteed by hard assets.

Either we do it voluntarily, in a negotiated manner, or through chaos, the multiplication of crises, clashes and ultimately war.