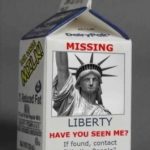 The struggle for liberty is nothing to scoff at, nothing to be trivialized and certainly nothing to be dismissed. But this is exactly what we see from our would be rulers and for good reason. When I entered this struggle a scant 30 months ago it was a very large but splintered movement made so by those intent on getting “their” idea of the American savior into the oval office. Although we shared common core ideas and ideals, we had differing beliefs on who could best lead this charge on tyranny … and this fractured and weakened us.

As I look back with perfect 20/20 hindsight, all my suspicions are confirmed that this division and infighting was brilliantly choreographed to render the massive awakening and ground swell of discontent I was seeing in America incompetent for as long as possible, and if possible perpetrate chasms so deep and wide between us as to leave us totally ineffectual, and if possible permanently.

We failed to unify, and to our detriment as we not only watched tyranny advance, but that very advancement accelerate. Many of our brothers and sisters went back to their armchairs and disassociated from the freedom movement for good (or so I perceived), their souls sickened by the wretched decline in Americas conscience and the demise of our once vaunted respect in the global community.

BUT as time advanced I again began to see a stirring in middle America. I could feel a rumbling of a frequency so low and deep that it was a strain to even hear it at first … but perceiving it as a vibration emanating from hearts and minds of those who had decided enough was enough from across this great country was almost instinctual. And this time there are no roadblocks of consequence, no primaries or national elections to be used as levers to pry us apart and keep us divided. The rumble advanced to a cry as more patriots jumped on the bandwagon, at last willing to forgo personal goals for the common goals of freedom and liberty. And now it is the ROAR of a movement sweeping across a nation intent on reclaiming the power and respect that is so rightfully theirs by law and by the grace of god … Unalienable.

Bikers advanced on Washington in numbers approaching a million strong, marches across the nation to protest and demand healthy food for us and our children, petition drives that force corrupt politicians to toe the line on cronyism (Monsanto Protection Act)! No our problems are not solved, actually they are many and maybe insurmountable … BUT my eyes swell with tears of pride as I watch heartland America stirring to life and readying once again to throw off the yoke of tyranny. One of our most vicious enemies, out of fear and respect made in a very prophetic comment “I fear we have awakened a sleeping giant”! America is slow to awaken and react, but once stirred … stand clear of the path we choose to advance on!

And now we have the trucker ride for the constitution, civil strikes and marches against Monsanto all converging on a three day period … My Eyes Have Seen the Glory … Halleluiah !!! This by all rights should rock the very core of this nation! As our mighty trucks, the very motivation of commerce in this land, pin Washington to the ground, our citizenry via civil and monetary strike, pin our economy to the ground and the massive protests of millions across this nation pin Monsanto (a purveyor of death to our children) to the ground, We The People are perched to strike a blow at the heart of Tyranny! And if Washington is deaf to our ROAR … let it be at their own peril !!!

Attached you will find a link to a  show The liberty Beacon project was privileged to participate in, discussing these topics. These discussions touch on all the points and issues mentioned above. Please take the time to listen to these patriots as they expound on our strengths and weaknesses as they perceive them, and the possible solutions we are all an integral part of. No we do not have all the answers but we are very aware of the questions, and together as the most powerful force for the re-institution of freedom and liberty in this once great nation, God help those who continue to ignore us …