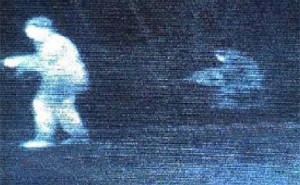 A warm body can be detected by the IR (Infrared) heat that it gives off with thermal imaging equipment, and provides a difficult challenge to someone or some thing wishing to avoid detection. You may be camouflaged in the best concealment that there is, but you may be highly visible to thermal imaging from someone with a IR scope on the ground or that Drone flying overhead… This goes the same for any warm or hot equipment that you wish to conceal.

What is Infrared (IR)? It is light (not visible to the human eye); electromagnetic radiation with longer wavelengths than visible light, extending from the red edge of the visible spectrum. If you could see the waves, the wavelength would literally be only 0.00074 to 0.3 millimeters, or 0.00004 inches to 0.01 inches. Humans at normal body temperature radiate chiefly at wavelengths around 0.01 millimeters, or  0.0004 inches… right in the infrared.

There is no absolute certain way to defeat infrared, but there are some techniques that make detection more difficult.

One of the most effective methods to block IR is to conceal behind glass. Glass is opaque to thermal imaging. It is not a practical solution though, due to the obvious impracticality of carrying around a pane of glass, or constructing your walls and ceiling out of glass

A simple and effective method to block IR is an ordinary ‘space blanket’ or thermal blanket of Mylar foil. The foil will block the IR heat signature behind it. A problem though, is that whatever it is that you are attempting to conceal, its heat will either build up inside to an unbearable degree or it will escape ‘somewhere’, which will then be visible to IR imagers. Concealment for the most part will be temporary without elaborate mechanisms to disperse the heat signature.

For a quick temporary method of IR concealment, throw a blanket over yourself. A thick woolen blanket will help defeat thermal imaging. Covering with a layer of insulation, the heat is blocked (or partially blocked) so that it doesn’t radiate. This is only temporary concealment as the heat builds beneath the blanket, but it may work long enough to conceal during a quick TI scan or Drone flyover…

Other methods of partially hiding from IR is to conceal by blending in next to other warm objects like stones or thick walls that may still be holding the heat from the day. The vents in buildings may be out-flowing warm air; a source of heat that can help obscure your own thermal outline. You get the idea… wherever there is existing natural or man-made heat, you can blend in with that to help conceal your presence to an IR or thermal imager.

Wear an insulated jacket, insulated pants and a hat. It won’t be 100% but it will help lessen the heat signature. Again, the heat will build and escape through the neck openings and face. You could cover your face with cool mud, which will work temporarily. It’s all pretty much common sense; reduce, disperse, or cover the sources of heat.

Netting will help somewhat, but the holes throughout the webbing of the net will reveal some of the thermal IR heat. Netting will help to disperse the heat that may be underneath it as the airflow will be broken up somewhat by the webbing and will hide or smear hot spots better than nothing covering them at all. The heat signature will not be as intense, but spread out more. An example may be to cover a vehicle that has been running with netting, or to wear a Ghillie suit.

Put trees and/or brush between you and the suspected IR imager. Trees overhead will help break up the infrared signature, especially under a heavy canopy of leaves.

A moving heat signature at night is quicker to identify than a stationary one (up to a point).

When you are hiding your heat signature (with a Mylar space blanket or other means), under some conditions your signature may look ‘too cold’ to an IR scan of the area (an extra dark outline, or a ‘black hole’), which may make you detectable. Surely this is better than otherwise, but keep in mind that the objective is to blend in with the thermal clutter of the surroundings.

Avoid open spaces and skylines by day or night.

Thermal Imaging does not perform well in falling rain.

The problem with most IR cloaking methods, IR clothing or netting designed to block IR, is that it will also block the background IR – creating a black hole of varying degrees. Ideally you would want something that ‘cloaks’ or blends your IR signature such that the background scatter at your location is what the observer sees.

We are entering the age of the Drones, and there will be (are) all sorts of levels of detection capabilities. But starting with the basics of ordinary IR heat signature is at least starting somewhere…

Feel free to add your suggestions and ideas in the comment section bellow!

One Reply to “How To Block IR Infrared Thermal Imaging”