If you’ve taken any hikes lately you know that the spiders are out in full force.  This time of year it seems you can hardly take 2 steps before you do a spider web face plant.  A spider’s web is really one of nature’s most amazing exhibitions of strength and design.  Spiders are the ultimate survival trappers – catching their meals with elaborate snares.  For it’s size, a spider web filament is one of the strongest fibers on the planet.  To a survivalist this presents a challenging opportunity – how to harness this bounty and use it to provide basic survival needs.  Today, I decided to take on that challenge and create a Survival Spider Web Fish Net.

First, I needed a frame.  I cut a nice thin maple branch and bent it into a net frame shape.  I used the fibers from a nearby milk-weed plant to lash the frame together. So far so good… 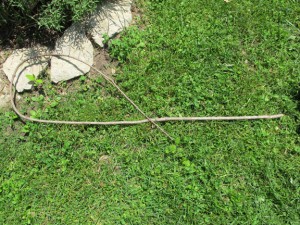 Next, I headed to the nearest water source – a creek about 400 yards away.  I took the long way and went off trail so I could capture as many spider webs as possible.  In route I swept up 1 web after another – eventually forming a pretty solid net around the frame.  I turned the frame each time and swept up webs from both sides. 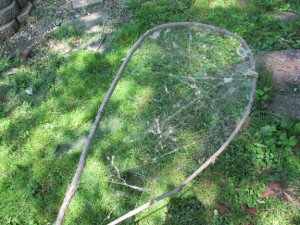 After about 30 minutes and 25 or so spider webs later I came to the creek in the woods. 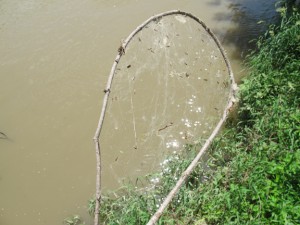 I wasn’t sure exactly what I wanted to try and catch.  I thought maybe crayfish, tadpoles, frogs or minnows.  I am an opportunist so I decided to walk the creek bank and see what I see.  I decided to test the spider web net in a little current to see how it would handle water. 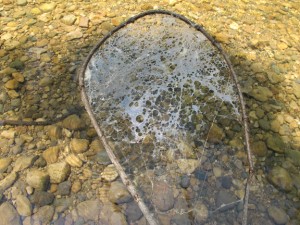 Testing the Web Net in water

Once I tested the net in the creek I thought… this might actually work.  I kept walking and came upon a little pool of water that had 1 little bottle neck inlet.  I noticed quite a few minnows in the pool.  I blocked off the bottle neck with some rocks and went to work.  Within 5 minutes I had caught my first minnow! 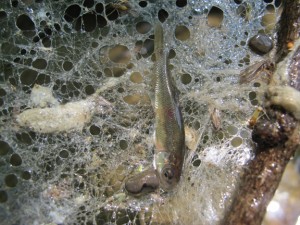 I would toss rocks on one side of the small pool and drive the minnows into a frenzy.  After about 20 minutes of slowly running my nearly invisible net through the water, I had caught about 15 minnows.  Not bad. 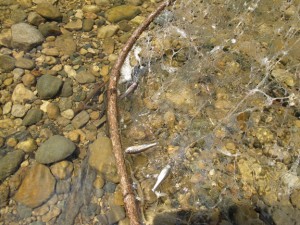 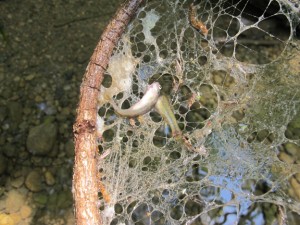 Eventually my net started to fail.  I could have gone back into the woods and replenished but I felt pretty good about the haul already.  You can create a viable fish net from spider webs!

What to do with MINNOWS?

You can use minnows for several survival functions actually.  First, you can eat them.  A general rule of thumb is that any fish under 2 inches you can eat whole.  I could have boiled them in a stew or steamed them over a fire.  Second, you can use them as bait.  Minnows make excellent bait for catching larger fish, frogs or turtles if you have a hook and line.  You can also use them as bait in land snares.  They would be irresistible to almost any furry animal that lives near water.  A little pile of minnows wouldn’t last very long in the woods – that’s for sure.

About Willow Haven Outdoor & Creek Stewart
Creek Stewart is the Owner and Lead Instructor at Willow Haven Outdoor – a leading Survival and Preparedness Training Facility located on 21-acres in Central Indiana.  For more information on Survival Courses and Clinics offered at WHO, click HERE.  Creek is also author of Build the Perfect Bug Out Bag: Your 72-Hour Disaster Survival Kit and The Unofficial Hunger Games Wilderness Survival Guide.  You can contact Creek directly at [email protected].