Are you ready for the coming tyrannical crackdown and the complete evisceration of our constitutional liberties? Have you taken the proper precautions that will ensure the safety of you and your family? It is not likely that very many of us have taken any meaningful steps to maximize our chances for survival in what will prove to be humanity’s darkest days. Will it be possible to avoid detection and prevent yourself from being taken into custody?

When the DHS bus rolls into your neighborhood, are you prepared to deal with what lies ahead? Let’s assume for a second that Obama attempts a third false flag, like the two has attempted in the past several months, and he is successful. Subsequently, martial law is fully declared. I have always said that the order of things to come will be false flag events, followed by martial law and culminating in WWIII.

Using history as an example, if a martial law government determined that the 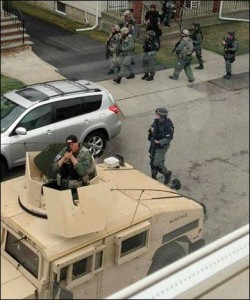 population might rise up, it would be prudent to remove the potential dissident leaders. The Gestapo and the KGB employed the same tactics in which they would arrive at a residence at 3AM, initiate a forced entry into a home, move to quickly gag and bound the family, quickly usher them out to a waiting vehicle and quickly transport the targets to a remote location for final disposition.How do you know if you are a potential target for immediate elimination once martial law is declared? The short answer is that you cannot be certain. Former NSA agent, the late A.C. Griffith, once stated that we are all assigned a threat matrix score and categorized on the NSA’s ability to track your movements, rate your web surfing habits, track your proximity to other known dissidents through cell phone movement matching and quantitatively and qualitatively monitor your electronic communications. Every one of us has a threat matrix score which is assigned by the NSA. What we do not know is how we compare to everyone else and what will be the cutoff point which would increase the danger for some. Certainly, former military leaders who have been shown the door by Obama are at extreme risk because of their potential to organize guerrilla forces. Key members of the alternative media would be another primary target as well those people who would immediately fill an opposition leadership role after the removal of the original opposition leaders.

For the people taken in this matter, along with their families, the survival rate will be very low. For those dissidents who manage to avoid being taken in the initial purge, your facial image will be uploaded to every traffic and security camera plugged into the NSA system. Detection and arrest will be short-lived except for those who have help or are located in very remote areas.

If you are unlucky enough to be located in an area to be considered to have the potential to mount a resistance against the unfolding tyranny (e.g. high number of registered gun owners, high number of veterans, Tea Party members, etc.), mass round ups will be conducted.In what form will the roundups take place? This is an easy answer. In the aftermath of the Boston Marathon Bombings, martial law troops invaded Boston and provided us with the DHS version of roundups. The DHS oppressors came in the early morning hours. The perimeter of a city block was sealed off by ground troops and an armored personnel carrier. A dozen, or so, storm troopers would approach a house and empty the house of its inhabitants without allowing any time to change or the opportunity to bring any personal items.The troops would start on opposite sides of the street with one group working a north-south directional seizure of residents, while the other group would work in the opposite direction. Therefore, if anyone attempted to run, they would be pushed toward the other group of soldiers coming in the opposite direction. This happened over and over again in Boston. The arresting troops were supported by a heavily armed personnel carrier.

Your family members will be separated by the authorities as a prelude to sending you to their detention facilities, and that means that men will go to one facility, and women will go to another. Children will have their own facility awaiting them as well. Remember, the state owns your children and they have declared so in their Agenda 21 documents. In all likelihood, this will mark the last time you will ever see your family. How do I know this? Read the Rex 84 documents. The government tells you in plain language what they plan to do with you and your family.Men, women and children will be taken from their homes to temporary holding facilities. All three groups will be separated, processed and sent to by rail or by bus to more permanent holding facilities.

The NDAA gives the authority for the President to arrest and detain as many people as he deems necessary without due process of law. This act allows for mass arrests and deportations to prison camps. When Obama signed this unconstitutional legislation, do you really think the government was never going to act upon this self-granted brand of tyranny?

Executive Order 13603 and the Civilian Inmate Labor  Program gives the President the authority to incarcerate and conscript individuals into labor brigades in which they will be forced to work in slave labor units. Hitler did this in many of the death camps in which the inmates performed slave labor while they were being systematically starved to death. And where did Hitler get these wonderful ideas? He got the death camp ideas from the government’s treatment of Native Americans in what I call the ultimate Karma slap in the face, resulting from our past bad acts, as a nation.

Again, can anyone present an alternative interpretation that makes any sense with regard to cumulative potential for the enactment of REX 84, the NDAA, EO 13630 and the Civilian Inmate Labor Program? Every one of these documents, and several other government documents, speaks to the intent to mass arrest many Americans, enslave and eventually exterminate them. Before you roll your eyes and write to me in a spirit of denial telling me how crazy I am and how I am fear mongering (i.e. neurolinguistic term designed to discredit the evidence of a conspiracy), read each and every document, take notes and you will soon realize that you are watching the unfolding of something worse than what Stalin did to his people. And with the NSA surveillance spy grid, the American version of tyranny will be much more virulent than any other in human history.

There are only three ways that you can avoid being taken:

(2) Have friends hide you out. Yet, your friends and acquaintances are already known to the NSA; and,

(3) Emigrate to a foreign country. Again, you would have to be in place at the time the roundups commenced in your area.

As an aside, I had a dream the other night that has caused me much anxiety. I dreamed that my family had relocated to Norway. One night, we were listening to the radio and heard about the civil war in America. We felt relieved until we heard that the UN troops were in our town looking for any Americans. I don’t necessarily believe in prophetic dreams, however, I do think Americans are going to be hunted down, particularly Christian Americans.

The next part in this series will examine what conditions will be like if we are taken and what would be our odds for survival?

The Common Sense Show features a wide variety of important topics that range from the loss of constitutional liberties, to the subsequent implementation of a police state under world governance, to exploring the limits of human potential. The primary purpose of The Common Sense Show is to provide Americans with the tools necessary to reclaim both our individual and national sovereignty. You can follow Dave’s work at his web site, on Facebook and Twitter.