Gel fuel is a relative newcomer to the portable fuel scene and is making quite a splash, mainly because if you knock it over, it DOESN’T make a splash. It’s safer to use than regular fuel because it won’t spill out and cause a fuel fire, and it doesn’t produce any noxious gases if burned inside with no ventilation, which makes it an excellent tool for survival. 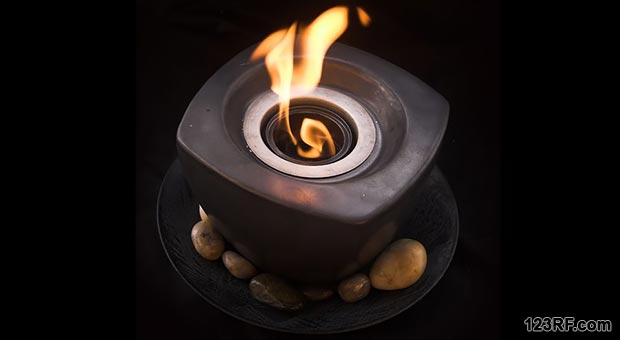 So let’s see how to make gel fuel at home for your stockpile.

There are a couple of different ways to make gel fuel at home and both are just a matter of preference. Regardless of which way you choose, the primary incendiary component is 90% isopropyl alcohol, aka rubbing alcohol. The other component, the gelling agent, is either soy wax or calcium acetate.

The debate about which is better is basically the same as that over chocolate or vanilla: it’s just a matter of which you prefer.

How to Make Gel Fuel with Soy Wax

Cool in the fridge for several hours or overnight, and then it’s ready to use.

If you’d rather store in quantity, you can put it in gallon jugs. Just make sure that you label it well so that nobody mistakes it for water or something else and store it away from children and pets.

How to Make Gel Fuel with Calcium Acetate

If you’d like to use calcium acetate, which is actually the more preferred method, you can either buy it or make it yourself.

Making calcium acetate at home: You’ll need crushed chalk (calcium carbonate) and white vinegar (acetic acid). Combine 4 parts vinegar to 1 part chalk and the result will be carbon dioxide, which will evaporate, and calcium acetate and water, both of which will remain. This process smells like rotten eggs, just so you know.

You’ll be left with a solid on the bottom and a liquid on the top. It’s the solid that you want, though you’ll need some of the liquid to make the gel. You’ll need to evaporate 1/2-2/3 of the water out of the solution. You can do it by placing the solution in the oven for a few hours, sitting it in the sun, or carefully evaporating it on “low” on the stove top. You can also strain it using a cheesecloth or coffee filter.

Making the gel fuel: Combine 9 parts isopropyl alcohol and 1 part calcium acetate. Stir together and it will instantly begin to gel. Put it in the empty soup cans as described above. Add some water in if you’re using solid calcium acetate that you bought. The ratio, regardless of whether you’re making your own or adding water to store-bought, is about 1 part water to 3 parts calcium acetate.

The Math Made Easy

We hate translating “parts” to actual measurements so we’re going to put this in cooking language for you. To get the proper ratio of calcium acetate to water, use 3/4 cup calcium acetate and 1/4 cup water.

Now, since it’s only 1 part of this mix to 9 parts isopropyl alcohol. There are 16 cups in a gallon so if you use 1 gallon of isopropyl alcohol, you need to add 1 3/4 cup + 1 teaspoon of the calcium aceate/water mixture to get the right ratio. After that, if the gel is too thick for your liking, just add a bit more isopropyl alcohol until you’re satisfied.

Many people like to burn fuel gel in the fireplace or in pretty pots for ambiance. If you’d like to do that, you can jazz up the fuel by making it crackle when it burns, so that it sounds like wood burning. To add this effect, add 2 tablespoons of cooking oil to each gallon of alcohol (1 teaspoon per 12 ounces of fuel gel).

If you’d like to get even fancier and make it smell good, pick up your favorite scented oil from the local craft store and use that in place of part (or all) of the cooking oil.

We’ve talked about the importance of morale in various articles throughout this site, and we stand by that idea. If you’re making gel fuel at home for survival, making it sound homey or smell good won’t make it less functional but it may make you feel good when things look bleak.

The measurements given here are just a jumping off point. If you want to make a huge batch, just follow the ratios. A word of warning though; just because gel fuels won’t spill like liquid fuels will, make no mistake that they WILL burn you. The fire is hot and it burns for a long time, so if you get the lit gel on you, it’s not going to be pretty.

Take all of the same precautions with it that you would with any other highly flammable liquid. Label it well, store it away from heat and sunlight, and keep it out of the reach of children and pets.

Now you know how to make gel fuel at home for your stockpile. You can store it for practically forever as long as you keep it covered, but you still need to be cautious. We like to seal ours in plastic zip bags to keep the moisture out, but that’s just our preference. If you’ve made gel fuel, tell us about your experience in the comment section below.

Find out all you need to know about fuel for survival on Conquering the Coming Collapse.