Because the colossal debt cannot be paid back in a deflationary environment, there will be an utter collapse of the financial system.

Because the enormous debt cannot be repaid by printing money (only making matters worse), there will be a complete collapse of the financial system.

Either way, deflation or reflation, the financial system appears to be screwed… 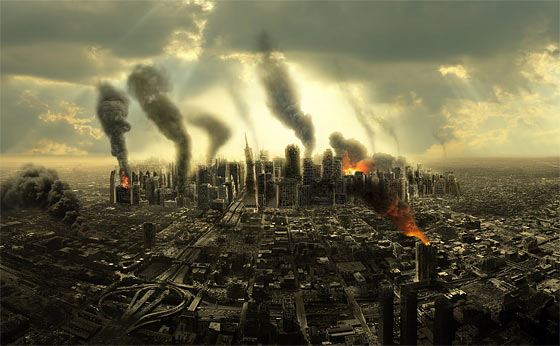 The masters of the system know that in a deflationary environment, they will ultimately lose control when the resulting financial ‘greater depression’ leads to chaos and total breakdown.

They also know that they need to maintain ZIRP (zero interest rate policies) because any increase in interest rates will balloon the already high payments on the gargantuan debt – spiraling the already bad situation out of control.

Either way, the financial system is doomed to failure and chaos.

There is no way of avoiding it.

Collapse.
They (the consortium of the federal reserve and central banks along with their European counterparts) have been managing a fine line throughout the existing financial crisis, and many believe they have exhausted all of their ammunition. All that is left is deceit and lies as they manage perceptions while twisting the facts and numbers, attempting to disguise their continued (necessary) debt creation to stave off collapse.

They absolutely cannot deflate. That would be their most terrifying position and they will ultimately do everything in their power to not allow that to happen.

They know the debt will never be paid off, but they hope that they can manage the public’s perception of the burgeoning and surging debt while they attempt to manage inflation (currency devaluation).
Inordinate money printing leads to crumbling currencies, and many countries are doing it.

Despite efforts to hide it, there are clear signs of inflation bubbling into the psyche of the public.

While the cost of food is not heavily represented in the government consumer price index, it is certainly one of the major costs of living for many middle class American families – most of whom know that food prices have been stealthily moving higher and higher (while packaging is smaller and smaller).

As an example, the following commodities futures chart of milk, cattle, cocoa, coffee, soybeans, and oats, are a snapshot of what has been happening since as recent as 2013-NOV till now.

As the former power base of middle class America continues to be strangled by the accumulating effects of stagnant wages, debt, a devaluing dollar and steadily higher costs of living – the financial future is bleak.

While the powers-that-be continue to juggle their efforts to prolong the inevitable demise, the $1.4 quadrillion derivatives bubble looms ominously in the background – so incomprehensibly enormous that most people cannot even see the elephant in the middle of the room…
The question is, are you willing to blind your eyes to the reality of what has been going on here, in the hopes and expectations that our masters will successfully steer the great ship America around the iceberg dead ahead? Are you serenaded by the lovely music playing on deck?

Another question is, even if you are one of the relative minority who believes we are heading for financial calamity, are you convinced that our masters will prolong and stretch out our demise such that it will be relatively painless on the way to the bottom?

Or are you one of those in the greater minority who believes that this ship is probably going to sink fast, perhaps triggered by a yet unforeseen gash in her hull as we bash the iceberg?