We are on the verge of another recession. So says Shadow Stats economist John Williams, who warns that by the end of July it will become apparent to all Americans. That’s when the government will release its latest GDP economic figures and according to Williams those numbers, combined with revisions for the first quarter of 2014, will show negative economic growth for a second quarter in a row, the official definition for recession. 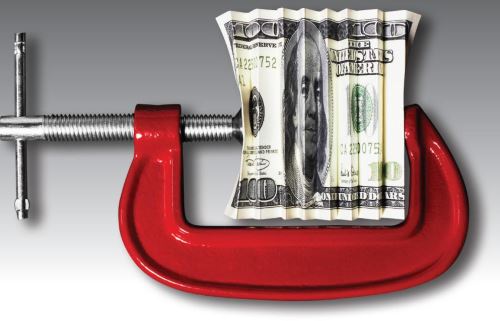 In an interview with Greg Hunter’s USA Watchdog, Williams explains that it all boils down to one critical factor. Credit lending has tightened up since the crash of 2008 and without it U.S. consumers don’t have enough money to continue fueling the economy through consumption, the single most important element of economic growth.

We’re turning down anew. The first quarter should revise into negative territory… and I believe the second quarter will report negative as well.

That will all happen by July 30 when you have the annual revisions to the GDP. In reality the economy is much weaker than that. Economic growth is overstated with the GDP because they understate inflation, which is used in deflating the number…

What we’re seeing now is just… we’ve been barely stagnant and bottomed out… but we’re turning down again.

Income… the median household income, net of inflation, is as low as it was in 1967. The average guy is not staying ahead of inflation…

This has been a problem now for decades… You were able to buy consumption from the future by borrowing more money, expanding your debt. Greenspan saw the problem was income, so he encouraged debt expansion.

That all blew apart in 2007/2008… the income problems have continued, but now you don’t have the ability to borrow money the way you used to. Without that and the income problems remaining, there’s no way that consumption can grow faster than inflation if income isn’t.

It’s just not going to happen.

With nearly 50 million Americans on food stamps, a record of over 10 million receiving disability benefits, and millions more depending on unemployment insurance to pay their bills it was only a matter of time before reality caught up with the fuzzy math being used to justify a so-called recovery.

The bottom line is that we, as consumers, have no more money left to throw into the economy. We’re using most of it on food, rent, utilities, and now mandated health insurance taxes. And as Williams noted, incomes aren’t rising, so without additional credit being pumped directly into the hands of the consumer there is no possible way to keep spending money.

Where is all this headed? Williams warns that the government’s failure to address the economy and our national deficits will lead to disastrous consequences.

You are not seeing an annual deficit of $400 or $500 billion dollars.  You are really seeing something close to $6 trillion.

That is beyond control, and it raises the question of long term solvency of the U.S.  It is a big concern for the global markets.  It’s really the reason why nobody outside the United States wants to hold the dollar.  Now, look at the U.S. economy, it is turning down.  Economic strength is a big factor in the value of a currency.

The way I see it, the dollar could go to zero in terms of its purchasing power.  You don’t want to have your assets in U.S. dollars.

John Williams previously forecast that A Domestic Hyperinflationary Environment Should Evolve by 2014. Food prices, gas prices, electricity prices and the cost of most other essential commodities are rising unabated. Currently, we are seeing an annual rate of inflation for food of over 7%, a level that will lead to serious problems coming into Fall.

Now, as Williams predicted earlier this year, a recession will be apparent once the government is forced to revise their economic growth figures later this summer.

He’s two-for-two so far and he says that what we’ll begin to see next is a loss of confidence in not just the U.S. economy, but the status of the U.S. dollar as well.

Given the rampant manipulation from government and global central banks, the timing of the end game is elusive. But what we know is that nature always wins out, despite our efforts to control it.

This time around, when nature finally shows its economic fury, it could well go down as the largest collapse in the history of the world.

The time to prepare for it is now.