A spokesman for the Center for Security Policy says that the threat of Electro Magnetic Pulse (EMP) is real. With Iran developing multi-stage Space Launch Vehicles (SLV) the possibility of such an attack will become even more probable than ever before: 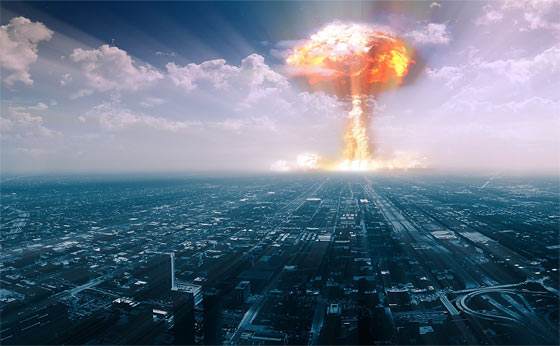 And experts forecast if such an attack were a success, it effectively could throw the U.S. back into an age of agriculture.

“Within a year of that attack, nine out of 10 Americans would be dead, because we can’t support a population of the present size in urban centers and the like without electricity,” said Frank Gaffney, president of the Center for Security Policy. “And that is exactly what I believe the Iranians are working towards.”

A recent launch of an SLV by Iran has sparked renewed concern of an attack that could send an electromagnetic pulse powerful enough to wipe out computer controls for systems on which society has come to rely, officials say.

As the G2 Bulletin reported last week, Ronald Burgess, director of the U.S. Defense Intelligence Agency, revealed that Iran successfully launched a multi-stage SLV, the Simorgh. The device ultimately could be equipped with a nuclear bomb, which the U.S. intelligence community assesses Iran is developing.

Officials also report Iran has been testing detonation of its nuclear-capable missiles by remote control while still in high-altitude flight. The development makes a potential EMP attack on the U.S. more probable.

An enemy of the United States, be it Iran, North Korea or a terrorist organization, does not need to detonate a nuclear weapon on the ground.We believe this is the only reason why Iran would be testing SLV’s with in-flight detonations. With this kind of weapon, Iran (or anyone else) would simply need to strike first. Once the weapon goes off, it would be difficult to determine from where it came and to respond appropriately, as all forms of traditional communication would be wiped out.

A small-scale, five to ten kiloton weapon detonated 200 miles above Nebraska, or a few weapons detonated 50 miles or so above the eastern, western and central United States would do the job.

The effects would be nothing short of disastrous – literally the end of the world as we know it.

All unprotected and unhardened electrical devices would be left useless.

This means that everything, from the refrigerator in your kitchen to the semi-trucks that carry food across the country, would be non-functioning.

If an enemy of the USA wants to bring America to its knees without rendering the land completely useless, they could do so with an EMP weapon.

We’ve always believed that a mainland invasion of the United Stated would be difficult, if not impossible. But, if an EMP weapon were to be used, our country could effectively be invaded within a matter of months, as most of the population would be wiped out and the government and military infrastructures in disarray.

We consider EMP as one of the most significant threats out there. The recovery period from a collapse of this magnitude would be counted in decades, not years, thus, for those who are “prepping” for a worst-case scenario, consider long term sustainability planning when planning for an EMP SHTF scenario.

3 Replies to “EMP Threat: ‘Within One Year 9 Out of 10 Americans Would Be Dead’”