The new Islamic terror group, ISIS or ISIL, is only slowly appearing on the radar screens of the mainstream media, and indeed is so fresh to the public eye that there isn’t even yet agreement on what to call it.  But if you cast around, you’ll see plenty of ‘buried’ news stories quoting senior military and political leaders who describe ISIS as now the most dangerous threat to the US and the West in general (most recently Defense Secretary Chuck Hagel). 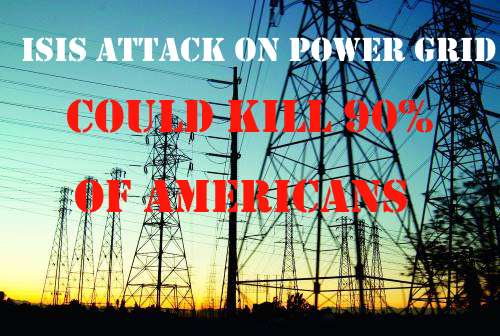 If we take their desire to attack and harm the US at face value (and what possible reason would we have not to believe them when they say this) then the question becomes simply one of understanding what they might do, and when/how they might do it.  Well, yes, there’s another question too – how to stop them!  But that’s a question few people are asking, and outside the scope of this article in any event.

The Texas Dept of Public Safety believes they have found evidence that ISIS plans to orchestrate an attack on our power grid, and it has been speculated that ISIS might not even mount the attack itself, but could instead pay one of the Mexican drug cartel gangs to carry out the attack on their behalf.  Dr Peter Pry, head of the Task Force on National and Homeland Security, said that a gang such as the Knights Templar (no relation to the middle ages religious order!) has experience in destroying grid infrastructure in Mexico and could readily black out much or all of the US for an extended period.

His gloomy predictions were supported by Frank Gaffney, founder and president of the Center for Security Policy in Washington.  At a joint press conference with Pry, Gaffney quoted sources as suggesting that a twelve month power outage would see 90% of the US population wiped out.

We definitely agree that a grid attack could see the grid down for at least 12 months, and quite likely very much longer.  For more on this, we’ve written regularly about the vulnerabilities and difficulty in repairing the nation’s electricity grid.

We’re not so sure that a 12 month power outage would see the death of 90% of the population, however.  If we assume that the grid outage did not extend to Canada and Mexico, then we would expect many people close to the borders would simply move north in typical classic refugee manner, and considerably more than 10% of the US population is close to the Canadian border.  Plus it seems reasonable to assume that the Red Cross and other relief organizations would come to our assistance, because hopefully the rest of the world would still be functioning.

However, we do agree that the sudden loss of electricity across the nation, and extending for a year or more, would be extraordinarily disruptive and would involve in massive loss of life.  This is a classic example of what we refer to as a Level 2 type scenario.  It is something we should plan and prepare for, and with appropriate planning and preparation, it is something that we and other appropriately prepared people could survive.

Whether there would be a 90% casualty rate or ‘only’ a 50% casualty rate, or whatever other number is in some regards a relatively ‘minor’ detail (and we’d also point out that most/all of the unprepared survivors would live a very miserable existence while the nation struggled to recover and restore power.  Furthermore, when the grid went live, a year or two or three later, what would the country then look like?  We’d not all then return back to our normal jobs and resume our lives and lifestyles as if nothing had happened.  The economy would be destroyed.  Much of the infrastructure would be destroyed, many cities would be burned out looted hulks of their former selves, and people would have moved away, out of the cities and to places where life can be sustained.

The recovery would be as difficult as the outage, and would take much longer.  This is something few people focus on.  There is an understanding that when the power goes off, things get very bad, very quickly.  But it seems that some people are assuming that when the power is restored, the problems are solved and everything snaps back to normal.  Not so.

The three key credible messages from this press conference are :

How well prepared are you for a sudden loss of power for say two years?

One last point.  Maybe it is unrealistic to expect the government to ‘harden’ our power grid and make it resistant to such threats.  But couldn’t they at least be directing some of our enormous defense budget to neutralizing the ISIS threat?

This article first apeared on codegreen.com