You’re in the middle of nowhere.

Whether by choice or by accident, you need to be able to fend for yourself. Even if you brought your own modern traps with you, the more of them you have working simultaneously, the higher your chance of snagging some grub. 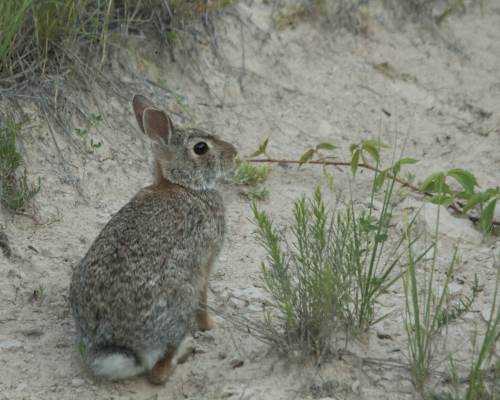 One of the easiest traps to build is the Mohave Treadle Snare. It’s also moderately simple to set, and you only need to come prepared with some kind of thin trapping line and possibly your knife.

*Note: Keep in mind that in most states, it is illegal to set and leave primitive traps unattended. Obviously, if you’re in danger of starvation, then the law can make an exception, but in most cases, you may only construct primitive traps temporarily for educational purposes.

Let’s take a look at how to build your own Mohave Treadle Snare.

One issue with deadfall traps is that are notoriously difficult to set, and you will kill the critter almost every time you have a successful trigger. Personally, I’m a fan of traps that will keep the critter breathing, because live meat never goes bad. Some of the best bugout-survival traps are from Havahart – as those are made so they don’t do in the animal when it triggers, and they’re extremely effective if you baited them correctly.

Nevertheless, treadle traps can swing both ways in terms of keeping a critter alive or killing it; as much of that has to do with the strength and positioning of your trap’s engine and how the snare synchs.

The Mohave Treadle Snare is also extremely versatile, and it can snag just about any size critter. However, for this post, we’re just going to go with rabbits as our target – simply because they’re probably best for this kind of setup.

Your first task is to find a good rabbit trail. Scat and tracks are always a good sign, and they’re a breeze to identify if fresh snow is on the ground. Though rabbit scat can often be mistaken for that of a deer, the absence of obvious deer tracks should be a dead giveaway.

Once you’ve found a good, well-trafficked rabbit trail, it’s time to set your treadly right on top of it.

You’re going to want to find a sapling to work as your ‘engine’ or your ‘spring.’ For the purpose of snaring a rabbit, your torque doesn’t need to be extremely heavy, but it’s best to err on the side of having more spring weight than you need. This is largely going to be an issue of feeling, trial and error.

Make sure the sapling is close to the trail, but it doesn’t necessarily have to be directly on top of it. Much of that depends on how much line you have at your disposal.

Also, whether you dig it yourself or find an existing one, make sure your desired set location has a shallow divot that’s about three to four inches deep, 14 inches long and as wide as the trail itself. The divot will allow the treadle to drop and trigger the trap.

Next, you need to find your vertical support bars. It’s best if you can find ‘Y-shaped’ sticks. Break them down to size if you can, that way you won’t have to use up your knife steel.

They need to be sturdy enough to support the weight of your sapling engine, so go with non-decomposing wood at about the thickness of your thumb. Make them each about seven inches long.

Essentially, you’re looking for your ‘Y’ sticks to have one side fixed in the ground at a 90-degree angle and the other jutting out an inch or so at 45 degrees.

Drive the long side of those sticks vertically, straight into the ground at least three inches, and keep them about 12-14 inches apart.

Make the inch-long ’45-side’ of the sticks face into the trap, perpendicularly.

Your horizontal bars merely need to be sturdy, but not too thick, as the two will be able to share the engine’s spring weight. These need to be longer than the distance between your two ‘Y’ sticks in the ground and roughly the thickness of a pencil. Find two of them.

Step #3: Your Line and Trigger Toggle

For this step, I recommend tarred mariner’s line or trotline (bank line), as it tends to synch quite easily, and it’s just the right thickness. How much you need depends on how far your engine is from the trail, so this will vary set by set.

You will also need to find your trigger toggle. This stick needs to be a little less than four inches long and roughly thumb-thickness.

Tie your line to the top of your sapling and determine how much spring weight you’re going to need versus how much distance it is to your set. Again, this is going to be almost all guessing in the beginning.

Next, you’re going to tie on your toggle stick at the spot where you have adequate weight to run the trap and at the spot that’s in between your two ‘Y’-sticks.

You will also need to leave space on the line for your snare after your toggle knot. You should make the snare large enough so a rabbit could just about sit inside the loop.

Once you’ve tied your toggle to the line, you will need to play with your set a bit to get the mechanics and your ‘trigger weight’ just right. However, your first step is to actually setup your treadle.

All you will need is thin sticks to rest on the lower horizontal bar, and then you cover it with grasses, leaves and other materials, so your critter can unwittingly walk right onto it.

In order to set the trap, take your toggle in one hand.

With your foot, press the upper horizontal bar into the cradle of the ‘Y’ in your support sticks to hold it in place.

Next, take the lower horizontal bar and treadle in your other hand and lift.

The key is to rest the toggle perpendicularly on both horizontal bars, allowing the weight of the engine to hold the treadle in the air over the divot.

Because this is a fairly stable trap, you can go ahead and arrange your snare on the treadle.

If all goes as planned, a curious rabbit will be hopping along the trail, and onto your treadle… right into your snare.

Its weight will force the lower horizontal bar downward and release the toggle. Then, the sapling will twitch up, ensnaring the rabbit.

If this happens successfully, you’ll come back to a furry meal – and the knowledge that your survival skills paid off yet again.

Find out more about skills that will save your life in the wilderness on Conquering the Coming Collapse.

Alicia grew up in Alaska where she earned her hunter and wilderness safety license at age 13. She now works as a content coordinator for a tech company and blogs in her free time at Homey Improvements.

One Reply to “How to Create Your Own Animal Trap: the Mohave Treadle Snare”