Prepping is a unique world because it’s filled with people heavy on theory but light on practical experience. And few of the folks with practical experience have actually put their skills to the test in an actual crisis. It’s one thing to store food, train with a firearm, and practice primitive skills in today’s society, but it’s an entirely different thing when your life is on the line. 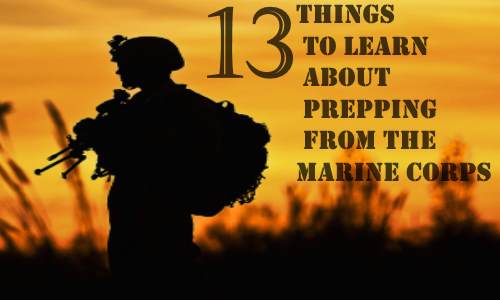 That’s why I decided to share some of the things I learned about prepping while in the Marine Corps. I hope you enjoy them and find them useful.

13 Things To Learn About Prepping from the Marine Corps

1. You always need a plan

What do you think will happen when your family are split up when a crisis strikes; for example, you and your spouse are at work and the kids are in school as a hurricane approaches or civil unrest breaks out—without the ability to communicate, how will you ensure that you are able to rendezvous with them at a safe location?

If you try to react on the fly, you’ll make poor choices and each member of your group will make different choices, so in the Marine Corps, we planned for damn near everything: what to do in an ambush, what to do if separated from the unit while on patrol, what to do if communications went down, etc.

You should do the same thing. Do you have a plan for when a natural disaster (hurricane, tornado, flood, wildfire, earthquake) strikes your area? How about is your house catches fire? Job loss? Civil unrest?

Develop a set of contingency plans, starting with the most likely events working your way down to the least likely. It might be a lot more exciting to imagine a Mad Max-style apocalypse, but you’re far more likely to become unemployed or be forced to deal with storm damage to your home.

2. Things will rarely go according to that plan

No matter how well-trained you are and no matter how thoroughly you plan, something will always go wrong.

Despite extensive planning for a movement to contact drill in the mountains of Korea, my unit managed to get lost en-route to the objective in the mountains of Korea, arriving about six hours late around 0200. Now, I could say something about a 2nd lieutenant and a compass, but that’s largely irrelevant because anything can go wrong. You could get lost, a vehicle could break down, you could suffer an injury…the list goes on.

3. So, you always need a backup plan

The solution is to have a backup plan, and if possible, a backup plan to your backup plan. For example, prior to stepping off for a patrol, we would plan for what to do if separated from our unit. Depending on the circumstances, you might establish radio communication, rendezvous at a previous rally point, rendezvous at a new location, utilize a signal flare, etc.

4. Be early for everything

Have you ever arrived at an LZ (Landing Zone) after the helos have already left? I have, and it sucks because it means that you have to either extract on foot, which means walking an obscene distance with 50-100 pounds of gear, or posting security and waiting hours or even days for the next extraction window.

As a result, Marines are early for everything.

5. You can’t rely solely on yourself, so value and trust your team

I don’t care how bad-ass you are, you are not a one-man army. Whether covering overlapping fields of fire, splitting watch shifts, or managing the daily workload, prepping and long-term survival is a team effort.

You might be a weapons and tactics expert, have extensive medical training, or decades of experience growing your own food, but I’ve never met anyone who can do everything at the highest level.

I am very effective with all sorts of weapons, but my first aid skills are average. I can do amazing things with a radio, but I have no clue how to build a backup power supply. The point is that while you should continually work on improving all of your skills, you should also build a network of people who complement your weaker areas.

If I had a dollar for every time I heard some deadbeat say “I could have been a Marine,” I would have a 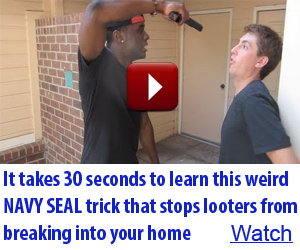 nice cabin in the mountains already.

No the fuck they couldn’t. If someone wanted to be a Marine (or SEAL, Ranger, or SF, for that matter) and they were capable, they would have done it.

Look, being a Marine take a lot of discipline. It’s cute to think you’re “operator as fuck” when you play airsoft in the woods for an hour then drive to Taco Bell to cram a chalupa into your pie hole before firing up the Xbox, but it takes a very different person to trudge through the swamp in the middle of the night, then lay motionless in the mud for hours being devoured by mosquitoes the size of pigeons while awaiting the opportunity to ambush the bad guys.

Discipline allows you to put your personal wants aside to focus on the mission at hand.

7. You learn the most when you’re at your worst

When everything is going to shit, you have more opportunities to learn something about yourself and others.

You learn very quickly about being a true team player during boot camp when your entire platoon is punished for your mistakes. Your first hump in full gear will teach you more about your own will than you could ever imagine. And retention from formal classroom learning is dwarfed by those conducted during a field operations when you’re cold, wet, and tired.

We learn more from our adversities and failures than we ever could from our successes, so don’t shy away from them.

8. You can’t achieve perfection, but you should always strive for it

We used to spend days, sometimes weeks preparing for inspections. Buttons would be polished, uniforms would be starched and pressed, and ribbons would be carefully positioned, but it didn’t matter. They always found something wrong. Perhaps a small thread handing from a pocket, a fingerprint on a belt buckle, or a ribbon that was 1/16th of an inch off.

We still poured time into each subsequent inspection anyway because even though we would never achieve perfection, that attention to detail brought us closer than most people ever would, and it spilled over into all aspects of our lives.

Do you know why we all carried our first aid kit in the same place? So that in the heat of battle or the darkness of night, we could render aid to an injured fellow Marine without having to search for a pressure bandage.

We had standard operating procedures (SOPs) for everything from combat to admin so that anyone could step in and fill a role in the event that someone was unavailable, injured, or even killed.

Just like planning, which I discussed earlier, you should invest the time to develop effective standard operating procedures. It will simplify and streamline daily operations, as well as enable new members to hit the ground running.

10. Sometimes you have to change things on the fly

While SOPs can be very effective, they can also become a crutch. I’ve seen far too many 2nd lieutenants make things twice as difficult or time-consuming because “that’s the way we do it here.”

Does it really make sense to spend a ten minutes trying to establish radio communication with a unit when you’re close enough to use hand and arm signals? In most cases, no, but I saw lieutenants fresh out of OCS do it over and over.

Use your head and feel free to go outside of your SOPs when it makes sense.

11. You don’t rise to the occasion, you revert to your training

You cannot suddenly develop the skill to conduct a live-fire, squad level assault just because you need it.

When the shit hits the fan, you will revert to your most consistent level of training. If that is lying in the prone on a static firing line taking slow, well-aimed shots, you will be a danger to the members of your group during a dynamic fire situation.

This applies to all skills. It’s great to read about building improvised traps, starting a fire, or land navigation, but until you actually practice these skills in a field environment, you can’t rely on them.

12. Courage is not absence of fear, it’s acting despite fear

Since I never faced combat, one of the scariest experiences I had in the Marine Corps was at the JWTC endurance course—an extensive obstacle course spanning 3.8 miles through the mountainous jungles of Okinawa, Japan.

Near the end of the course after a full day of grueling physical challenges, we had to enter an underwater tunnel in full gear and pull ourselves through. You couldn’t see anything through the clay-filled water, your body was weak, and you knew your gear would get hung up as you squirmed through the tunnel, so you were scared as hell, but you went anyway.

Absence of fear in a situation where it should exist is ignorance. Courage is simply doing what must be done, regardless of your fear.

13. You can achieve any goal by consistently putting one foot in front of the other

For me, there was nothing quite as miserable as a hump. That’s when you load all of your gear including a 50-100 pound ruck sack, and walk from point A to point B.

I was a relatively small guy at around 150 pounds or so, but since I was responsible for calling in fire missions and air support, I had to carry communications gear which often added up to an extra 50 pounds to my standard pack. After a few miles, your feet become raw and sore, every part of your body aches, and jolts of pain crash through your body with each thunderous step.

How does one complete such an ordeal? It’s simple, but not easy…take one step at a time. Don’t think about how far you have left to go, instead, focus on the next step. That’s all. Each step is one closer to your goal.