The collapse of the dollar will be the single largest event in human history. It will be the first event that touches every single person living in the world. All human activity is controlled by money. Our work, our wealth, our government, our food, even our relationships are affected by money. No money in history has had as much of an impact as the dollar. It is the de facto world currency. 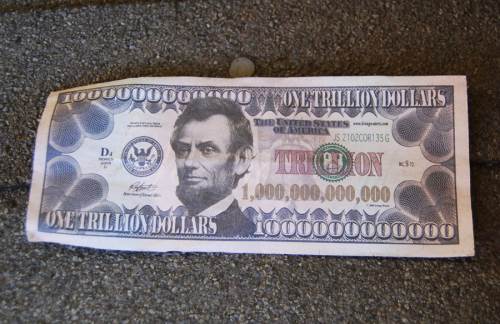 All other currency collapses will pale in comparison to this one. This collapse will be worldwide and it will take down not only the dollar but all other fiat currencies, as they are essentially no different. This collapse will lead to the collapse of all paper assets and the consequences to this will have inconceivable results universally.

The beginning phase of the economic collapse is over and the collapse is next. It will end in the bankruptcy of the US and all nations…..

Add to that the fact that billionare, Donald Trump, just warned America to prepare for financial ruin, then we’ve got a real case here:

“According to Trump, the United States is no longer a rich country. “When you’re not rich, you have to go out and borrow money. We’re borrowing from the Chinese and others. We’re up to $16 trillion in debt.”

“He goes on to point out that the downgrade of U.S. debt is inevitable.

““We are going up to $16 trillion [in debt] very soon, and it’s going to be a lot higher than that before he gets finished. When you have [debt] in the $21-$22 trillion, you are talking about a downgrade no matter how you cut it.”

“Ballooning debt and a credit downgrade aren’t Trump’s only worries for this country. He says that the official unemployment rate of 8.2 percent “isn’t a real number” and that the real figure is closer to 15 percent to 16 percent. He even mentioned that some believe the unemployment rate to be as high as 21 percent.

Things are looking depressing for our country and an apocalypse is not around the corner….it is already here! It’s just a matter of time before it effects you personally and gets worse.  As of yet, we are in the very beginning of its thrust.