Recently, former Assistant Secretary of the Treasury, Paul Roberts, said “War with Russia will be nuclear.” and he has indicated repeatedly that the current policies and mishandling of world events are surely leading us closer to that time. 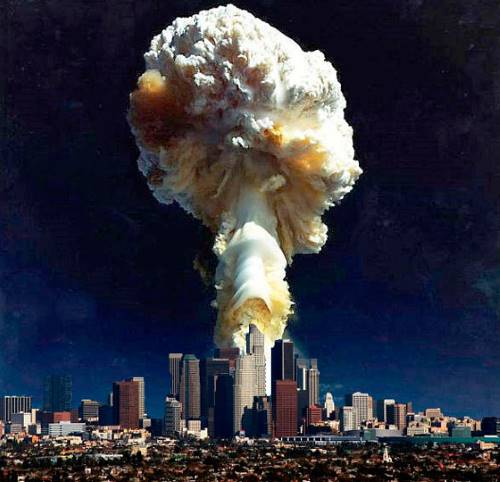 While nuclear war is unthinkable for most people (suffering from normalcy bias), in reality, the fact is that unless you are actually at ground zero or within a several mile radius of the nuclear blast zone, there is a good probability you’ll survive – as long as you limit your exposure to radiation, take shelter with proper shielding, and wait for the most dangerous radioactive materials to decay.

While surviving the aftermath of a nuclear wasted world is entirely another SHTF matter, consider the following information regarding your initial survival:

The initial nuclear radiation and the radioactive fallout are extremely dangerous. But as the materials decay and spread out, radiation levels will drop.

Alpha radiation are tiny particles. They will settle on everything (the ground, your garden plants, water, etc.) and ‘contaminate’ and attach themselves to other things including airborne dust. These particles can be shielded and stopped by a sheet of paper or by human skin (visualize dust). However if alpha particles are inhaled, ingested, or enter the body through a cut, they can cause damage to tissues and cells.

Beta radiation will easily go through paper and even thin aluminum, but can be stopped by a thicker shield (like wood and other thicker-denser materials). Beta radiation will do less harm to a cell than Alpha radiation as it passes through, however it can reach more cells that it can harm because Beta particles travel quicker-further than Alpha. It can cause serious damage to internal organs if ingested or inhaled, and could cause eye damage or possible skin burns.

Gamma radiation is a type of invisible, very high energy light. It’s the same type of stuff as light, infrared, radiowaves and X-rays. Gamma radiation tends to pass through your body, and although it won’t interfere with all the molecules that make up your cells – it can penetrate the entire body and cause cell damage throughout your organs, blood and bones. You need about 4 inches of lead to stop most gamma rays completely.

HOW TO REDUCE EXPOSURE TO RADIATION

Distance – the more distance between you and fallout particles, the better. Radiation will generally spread out by the inverse-square-law, which basically means that if your are twice the distance from the radiation point source – you will receive a quarter of the dosage, etc.

Shielding – heavy, dense materials (like thick walls, earth, concrete, bricks, water and books) between you and fallout is best. Stay indoors or below ground. Taking shelter in a basement or a facility below ground may reduce exposure by 90%. Just 4 inches of soil or earth can reduce the penetration of dangerous gamma rays by half.

Time – most fallout loses its strength quickly. The more time that passes after the attack, the lower the danger.

For every sevenfold increase in time after the initial nuclear blast, there is a tenfold decrease in the radiation rate.

In other words, if you have shelter with good shielding and stay put for just 7 hours – you’ve substantially increased your chances of survival. Even much more after just a few days.

If you don’t have a nuclear fallout shelter,

1-story home / Condo / Apartment – if no underground basement, find a place in the center of the home away from windows

Multi-story building or high-rise – go to center of the middle section of building (above 9th floor if possible). Note: if rooftop of a building next to you is on that same floor, move one floor up or down since radioactive fallout will accumulate on rooftops. Avoid first floor (if possible) since fallout will pile up on ground outside.

For radiation shielding, it’s a matter of putting raw mass of material between you and the radiation source. The more shielding, the better.

The heavier and denser the material, the better. Be creative if you have to. Use anything available and create a sort of cave within the structure you’re in.

Remove a door or two from their hinges and use as a roof, and stack more ‘stuff’ on top (and around).

The more supplies that you have in the house, the longer you will be able to shelter in place. Water is the most crucial, followed by food and sanitation supplies.

Backyard Innovator (A Self Sustaining Source Of Fresh Meat,Vegetables And Clean Drinking Water)

One Reply to “Prepping For A Nuke”