Law and order will be the first casualty when the shit hits the fan. Recent historical examples the world over, including New Orleans, Haiti, and Chile show that without policing, looting will become an immediate danger. 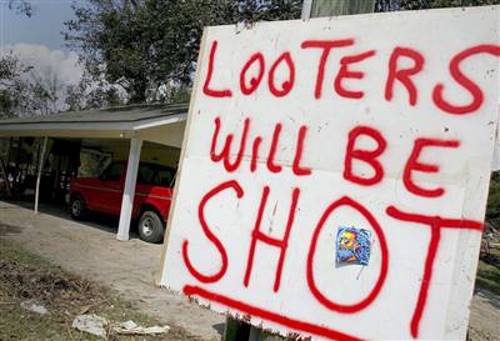 The following Guide to Looting When the SHTF by Thomas Northrop of No Bullshit Survival shows that survival and preparedness planning does not include just storing food, supplies, guns, and medicine, or creating tactical defense plans for your home and property. There will be organized gangs, whose sole method of acquiring necessities will be through looting. A friend recently mentioned that when discussing possible collapse scenarios at the water cooler, one of his office coworkers suggested that he would simply take what he needs from other people if it came down to it. Thus the looter mentality is not as isolated as we may think. In all likelihood, this person has already considered what he would do, how he would do it, and how far he was willing to go.

This is a reality, so understanding and accepting it as such is important now – so that you are fully prepared to deal with it if ever confronted by such a situation.

If you’re a law abiding citizen I suggest you don’t read this section. In some historical instances extraordinary measures have been taken against looters during times of crisis. It’s not uncommon in some countries for looters to be shot, either by police, army, or business owners. Some governments will justify the shooting of looters with the excuse of “preventing further damage to the economy”. I suggest you get out of countries that value the economy over your life.

Warnings aside… Let’s get down to business!

Looting is essentially the act of stealing goods during a catastrophe, riot, war, or natural disaster and can also be referred to as sacking, plundering or pillaging. Looting is almost always opportunistic and usually occurs during a collapse in authority.

Looting can be justified in many ways. Some people may feel that if the goods are not stolen, they will be wasted. Another common belief is that if they don’t steal the goods, it will be stolen by someone else. In the aftermath of a large disaster, these beliefs both hold credence and are good reasons for you to be looting!

As with any endeavor, preparation is the key to success. In order to take optimal advantage

of a disaster and loot effectively you’ll want to get several things handled ahead of time. The next few pages will cover all the information you need to become a master looter.

There are a few items that will make looting a lot easier. You’ll want to keep these items ready and on hand for when shit hits the fan. They should be kept together in the location for easy access so you just pick them up and go when it’s time.

The ultimate urban survival tool! A nice, heavy crowbar can be used to break into stores, clear your way through rubble and it can be used as a weapon! Don’t underestimate the crowbar. There are a million things you can do with a crowbar, just use your imagination.

These are keys that have been grinded down in such a way that they can be used to open almost any lock. Bump keys are used by locksmiths and they’re relatively easy to use. A crowbar will get you through any door or window but a bump key will get you through without making a mess.

A strong, large drawstring bag is a definite must for looting. Laundry bags are great for the purpose of looting. They have a large carrying capacity and when empty they can be folded to fit in your pocket. You can always go for a large backpack, duffle bag or rucksack but they’re cumbersome, expensive and made for looks more then anything else.

A dollar coin or quarter

You may be wondering… a dollar coin or quarter? What the hell for? Well the answer may be a lot simpler then you imagine. The coin is for a shopping cart! Just make sure you get one before the other looters! If you don’t want to use a coin, you can always use the crowbar to break the chains holding them together.

It’s very likely that if the situation permits looting, the power is probably out. Good luck getting over fallen shelves and getting food in the dark. Looting with one hand will also be difficult but there are a few methods around that. I suggest placing the lantern or flash light in the shopping cart, get a head lamp, or just bring someone along to shine the light and push the cart.

Find several friends or family members and make a plan! It’s all about leverage, you can get a lot more done if your work as team. Get everyone together in a room and discuss a plan of action. Here are the questions you’ll want to have answered:

Get a detailed map of your city and mark off important looting locations. Make a legend with symbols to represent different types of locations, for instance, use a circle for food stores, triangles for hunting/outdoor stores, squares for hospitals and pharmacies etc. A good resource for finding addresses and locations is Google maps, just type in a store name and Google will give you all the addresses for that store in your area. Copy and paste the results into a .txt file and print it out for future use. This map is extremely important and should be kept in a safe area. The map should be copied and distributed among friends and family. Here’s a list of some locations to keep in mind:

Some items are important to loot and some aren’t. A wide screen TV for instance will not contribute to your chances of survival. The highest priority should be on food and water but depending on location, finding water may be a problem. Water is too heavy to move around so instead of looting water bottles the focus should be on buckets and water filters. The value of money may be worthless in a disaster situation and therefore should not be a high priority. The most important items to loot are as follows:

The family run corner stores should be avoided as the owners actually have an interest in the store. The best historical example to illustrate this point occurred during the LA riots… remember Korea town?. Go for the Walmarts and Super stores as the employees could care less about you looting (they have no vested interest in the store).

Looting When Shit Hits the Fan

You have a plan and you know what to do but now we’ll going into the details of what happens next.

It’s my personal belief that violence will not break out in the first stages of a disaster since food and supplies are still in relative abundance and people have what they need to survive. This has been proven during hurricane Katrina and many other disasters. The first few weeks of a disaster should be spent looting and acquiring resources. Everyone in your team should loot the area and acquire as much as a possible. It’s only after several weeks of looting that gangs and groups will have formed and violence will erupt. Fighting will most likely occur over food and resources. All looting from that time on should be executed with extreme caution.

We will undoubtedly get flack for publishing this “guide,” so to clear things up, we are posting this not so much as an instructional manual for how to loot, but to reiterate the point that there are those, and they are plentiful, who are fully prepared to take what they need at the expense of others.

You may have stereotypes of what a looter looks like and the people they will be traveling with. Stop stereotyping, because the fact of the matter is, that when people are hungry and under extreme stress the line between right and wrong is blurred and very easily crossed, and color or socioeconomic background will not matter.

With respect to the looting guide above, Mr. Northrop’s list of items to loot are, for the most part,

necessities. Some might even suggest that instead of looting, we could call it “foraging,” at least when it comes to the essentials. Imagine for a moment that one of your family members has sustained an injury and requires antibiotics. Would you or would you not break into the pharmacy down the street to gain access to Penicillin? The same goes for food. If you’re food stores were wiped out, for whatever reason, and you knew of a train fully loaded with boxes of dry goods, would you or would you not “loot” that train to acquire the much needed food?

Some would argue that abandoned grocery stores, pharmacies, hospitals or distribution centers don’t belong to any one individual, so looting in those areas is not as bad as, say, breaking into someone’s home.

Supplies at those abandoned locations, however, will eventually and likely very quickly, run dry as everyone who hasn’t prepared (probably north of 90% of the population) will be scrambling to get as much food as they can.

You can probably guess what happens next. This is why it is important to prepare right now. The last place you want to be when the SHTF is out with the rest of the looters and foragers. It would be much more preferable to be at home finalizing your defense preparations – doing things like setting up barbed wire, firing lines, booby traps and coordinating with neighbors – because if the disaster event lasts for more than a week without outside resupply, gangs and looters are going to be headed your way next.