I received an email asking my opinion regarding the safety of drinking water that has been stored for a year under specific conditions that include being exposed to higher than normal temperatures during the summer.

Here is the question and my answer. 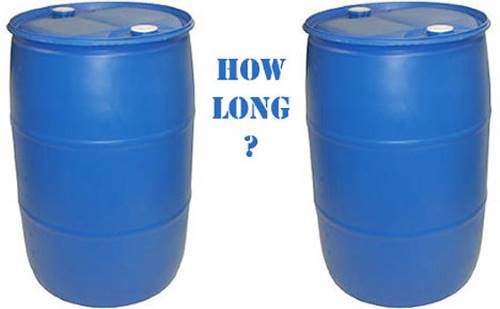 Water from a city municipal system which is treated and filled into a clean BPA-free 55 gallon dark blue barrel.

Bungs are tightened and sealed and the barrel is placed out side, siting on bricks to allow for air flow.

Outside temps during the summer months are about 105 degrees F for roughly 3 months.

Would that water be safe to consume after say about a year?

Or would you recommend treating for the purpose of consumption.

If I was confident that I had cleaned and disinfected the BPA 55 gallon barrel ahead of time (disinfection with proper bleach solution) by swishing the solution around all interior surfaces prior to filling with municipal water,

If I was confident that the barrel had remained sealed through the time period, then I would not be terribly worried about contamination after one year.

Having said that, given the conditions mentioned (exposure to high temperatures during the summer months,) I would replace the water each year – just because it’s probably not that difficult to do for peace of mind.

The reason is this… IF there was any contaminated particles within the barrel for any reason, the heat from the summer months could increase the likelihood of bacteria/pathogens growing, especially if the chlorine level gets too low. Chlorine will break down with heat and sunlight.

Side Note: Chlorine (bleach) has a shelf life and will lose its potency over time. When it breaks down, it basically turns to a salt, so as a rule-of-thumb regarding your regular household bleach, I would replace it each year.

Many people are under the misconception that water can go “bad” over time.

Safe drinking is about the contaminants.

If the water is not contaminated to begin with,

and sealed in a clean non-contaminated environment,

and so long as there are no contaminants that enter the environment,

It will theoretically be safe forever.

The water however will taste ‘flat’ over time, but that flat taste can be somewhat remedied by pouring the water back and forth from one container to another to reintroduce more oxygen when its time to drink it (aerated).

IF you suspect for any reason that the water might be unsafe to drink, then by all means, purify it before drinking! The safest way is to boil it.

You can also purify water with ordinary ‘regular’ household bleach.

There are many ways to purify water to make it safe to drink,
including the methods mentioned here…

Here’s a chart I put together for Bleach – Water Ratio For Purifying Drinking Water.

One Reply to “Is Stored Water Safe After One Year?”