The display of people at their most vicious and greedy never fails to put me in a state of shock.  The fact that a riot will break out over something as trivial a video game or this year’s hot new doll is almost sickening or who won a sporing event.  Yet at the same time I can understand it. 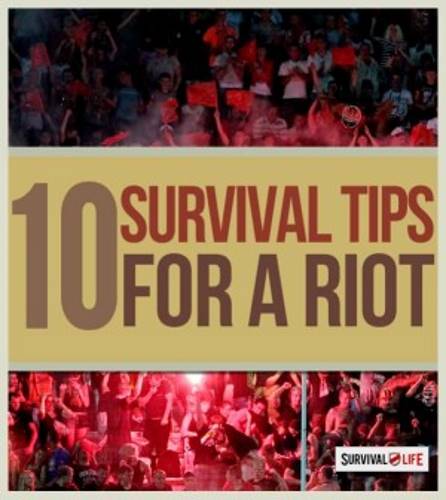 Anything can cause a riot… and everything has.  From the appeal of getting a good deal on something while being in a crowded area (like Black Friday) to a peaceful protest gone wrong… Anything can be a trigger.

The safest thing you can do is get yourself out of the way.

But how do you escape a riot?

If you’re on the fringes when a riot strikes it should be simple enough… But if you find yourself in the center of a mob, what do you do?

And how do you get out alive?

Your adrenaline is high and your instinctual competitive drive kicks in. When these two things combine it is a recipe for violence.

As we’ve seen with the recent events in Ferguson, Missouri, or even back in 2005 with Hurricane Katrina, sometimes all it takes is an emotionally heavy event to bring out the worst in people. Heck, we’ve even seen riots break out at sporting events – from both the losing and winning sides.

These opportunists will jump at the first sign of chaos and use it to their advantage to loot and steal from private homes and businesses, causing incredible damage. They’re selfish, greedy, and don’t care about the lives or property of the people affected by their animalistic behavior.

How To Escape A Riot

Here are a few ideas of how to escape a riot, should you get caught up in one.

1.     Stay calm and keep your emotions in check. Riots happen when intense emotions boil to the surface and explode into violence. You stand a much better chance of surviving a riot by keeping your own emotions in check. In the heat of the moment, your adrenaline and survival instincts will kick in, but try to think rationally and pursue safety in a methodical manner.

Do not fall victim to the mob mentality.  Below are a few tips that will help guide you safely out of a mob or riot situation.

2.     Avoid confrontation. Keep your head down, while at the same time looking for a safe exit. Do not involve yourself in the violence, even if you are struck or pushed, just keep moving.

3.     Walk. If you run or move erratically, you might attract unwanted attention.

4.     Don’t Stop Moving.   If you stop you run the risk of getting crushed by the sheer force of a mob of people moving in one direction

5.     Get inside and stay there. Typically riots happen in the streets. If you can get inside you are in a much better position to wait it out.

6.     Keep your doors and windows locked. Do not stand in front of the windows gawking. Move to interior rooms, this will reduce the danger of being hit by stones, bullets, or other items. Try to find at least two possible exits in case you need to evacuate the building in a hurry.

7.     If you’re caught up in a car, stay calm.  If your vehicle does become a target, quickly and calmly leave it behind.  Your Toyota is not worth dying for. If people block your escape route, honk your horn, and carefully drive through or around them at a moderate speed, and they should get out of the way. This is a last resort; never put someone else’s life in danger unless they are putting yours there first.

Driving towards police lines can be interpreted by the police as use of a deadly weapon and in the heat of the moment they may react with deadly force.

8.     Stay on the sidelines and back away slowly. If you’re caught up in a riot, don’t take sides. Be as inconspicuous as possible, and slowly and carefully move to the outside of the mob. Stay close to outskirts of the mob but try to avoid bottlenecks such as tunnels, pillars, high fences and long sections of walls.

The more time you spend in the middle of a riot, the greater your chance of being injured or killed. That said, in most circumstances it’s better to move out of a riot slowly. It can also be dangerous to move against a crowd, so go with the flow until you are able to escape into a doorway or up a side street or alley.

If you find yourself in the middle, you should not try to move in a different direction, but follow the flow and slowly make your way to the outside. This requires patience in order to work properly.

9.     Watch your footing. If you fall down, pull yourself up into a ball. Protect your face, ears and internal organs. In this position you are a smaller object that can be easily avoided. You will receive much less damage than if you were flat out on your back or stomach. If others trip on you they will help create a larger “pile” that other rioters will avoid.

Panicked crowds move fast and release an unbelievable amount of energy; once a crowd gets moving it is very hard to stop, and the flow of people could literally sweep you off your feet.

It is interesting to note that the force of only 6 to 7 average sized individuals pushing in the same direction can generate up to 1000 lbs. of force. This is more than enough to bend steel railings and topple brick walls.

During a stampede, people can even die while standing up, simply from the pressure applied to their bodies. This massive constricting pressure will cause them to black out and eventually suffocate.

When pressure is applied to your side, you may have a better chance at survival, just because your rib cage is protecting the brunt of the force, but you still have the ability to breathe.

If you plan on being in a situation where a crowd will form, the most important thing you can do is to make yourself familiar with the surroundings and make mental notes of any possible alternate exits. No matter where you are, make sure you always know how to get out.

Make yourself aware of the ground you are standing on, and know that trying to navigate in a crowd of moving people when the ground is uneven or wet can be extremely hazardous, causing you to fall and quickly become trampled.

Make yourself completely aware of the general atmosphere of the event, as panic can often be anticipated. When in danger, those extra few seconds can make all the difference, giving you the possibility of taking advantage of your escape route. Always stay closer to the escape route.

Again; if you find yourself in the middle of a moving crowd do not fight against it, and do not stand still or sit down, because you could easily get crushed.

Instead, move in the same direction of the crowd, making sure to take advantage of any space that opens up between people to move perpendicular to the crowd where the flow is weaker.

10.     Keep your hands up by your chest, like a boxer – it gives you movement and acts as a buffer to protect your chest.

The worst scenario is to be pushed by the crowd against a fixed object. Do whatever you can to keep away from walls, fences or barricades, as the crowd pressure can build up rapidly and cause you to suffocate or worse.

The crowd will move much like a wave in that after you’re pushed forward, just like an ocean wave there will be a slight lull. In that lull is your chance to move. You need to take a diagonal path between pockets of people.

There will almost always be a space between people that you can slip into. This will take time as you may only be able to move a few steps after each surge but eventually you will make it to a safe zone outside of the crowd.

Learn these tips and remember them in case you are ever caught up in a mob. Remember that the most important thing is to keep a level head and think rationally about your escape path. This is the only strategy that will ensure that you get out alive and unharmed.

P.S. These are a few tips to help you escape a riot, unfortunately escape may not always be your best bet.

When you can’t get out, the only thing you can do is survive.

Do you have any tips for surviving in a mob or riot situation? Have you ever been in a situation like this?

Let us know in the comments.

Written by: Above Average Joe on October 8, 2014.
Last revised by: Bio Prepper