Ebola outbreaks are believed to start through a natural reservoir, such as a fruit bat. Other animals may feed on fruit dropped by the bat, or the bats themselves. It is believed that humans are infected through handling and consuming bush meat. 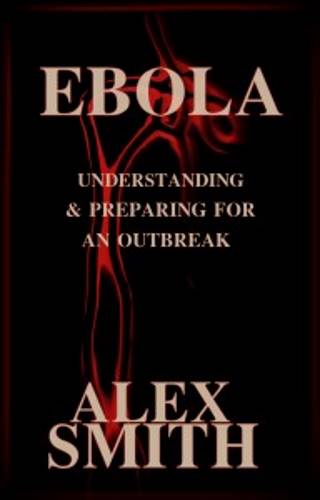 When an infection occurs in a human, Ebola can be spread in several ways. According to the CDC, Ebola is spread through:

Ebola can survive on fomites for various lengths of time, depending on environmental conditions. Laboratory experiments have shown that the virus can survive in infected tissue on surfaces for over 50 days at a temperature of 4oC (-15oF). In other experiments, the virus was able to survive in the dark for hours at temperatures of 20oC (68oF) and 30%-40% relative humidity. The amount of detectable virus was reduced to 37% of the original amount after 15.4 hours.

The CDC makes no mention of Ebola transmission through airborne droplets in humans. Because of the severity of the current outbreak, however, Ebola transmission through airborne droplets seems like a possible explanation. Note that the author says airborne droplets and not simply airborne. There is a huge difference. Airborne implies that a disease can be spread through the inhalation of tiny, dry particles that remained suspended in the air for long a period of time. These particles could also theoretically be transferred through air currents. Ebola is not airborne in this sense. The rate of infection is much too low. If Ebola was truly airborne, it should spread at a rate similar to tuberculosis, chickenpox or measles. One person with measles, on average, infects 12 to 18 people. The current Ebola outbreak appears to spread, on average, to one to two people. This value is known as the Basic Reproductive Number, R0. The following is a chart of the Basic Reproductive Numbers for various diseases. 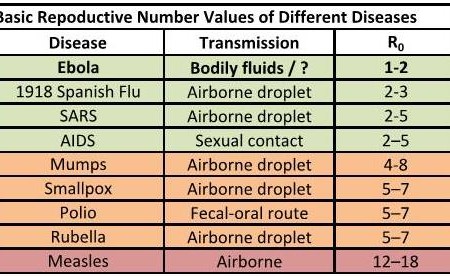 Airborne droplets, however, is a different story. Airborne droplets are relatively large (when compared to the dry particles that are suspended in the air by an airborne disease), wet particles, propelled through the air by way of coughing, sneezing or violent vomiting, that land on walls, floors, or other people. It is entirely possible that Ebola is spread via airborne droplets. The CDC still denies this. The WHO downplays the probability. Other experts, especially those who are independent of governmental organizations, are not as quick to dismiss this.

Despite CDC claims that droplet transmission is not possible, it has been shown that VHFs have an infectious dose of 1 to 10 organisms by airborne droplets in non-human primates.

Additionally, laboratories have been able to demonstrate that primates exposed to airborne droplets from pigs have become infected.

They continue, “Modern research, using more sensitive instruments and analytic methods, has shown that aerosols emitted from the respiratory tract contain a wide distribution of particle sizes—including many that are small enough to be inhaled. Thus, both small and large particles will be present near an infectious person. The chance of large droplets reaching the facial mucous membranes is quite small, as the nasal openings are small and shielded by their external and internal structure. Although close contact may permit large-droplet exposure, it also maximizes the possibility of aerosol inhalation. As noted by early aerobiologists, liquid in a spray aerosol, such as that generated during coughing or sneezing, will quickly evaporate, which increases the concentration of small particles in the aerosol. Because evaporation occurs in milliseconds, many of these particles are likely to be found near the infectious person. The current paradigm also assumes that only “small” particles (less than 5 micrometers [mcm]) can be inhaled and deposited in the respiratory tract. This is not true. Particles as large as 100 mcm (and perhaps even larger) can be inhaled into the mouth and nose. Larger particles are deposited in the nasal passages, pharynx, and upper regions of the lungs, while smaller particles are more likely to deposit in the lower, alveolar regions. And for many pathogens, infection is possible regardless of the particle size or deposition site.”

“To summarize, for the following reasons we believe that Ebola could be an opportunistic aerosol-transmissible disease requiring adequate respiratory protection:

The author tends towards CIDRAP’s stance. Infection through Direct Contact is certain, and airborne droplet seems likely, but aerosol transmissibles for up to 90 minutes appears possible as well.

The complete CIDRAP article (with multiple sourced studies) can be found here:

The author would contend that there are no studies that suggest airborne droplet, aerosolized transmissions and viral shedding in humans is possible because researchers are having a difficult time finding volunteers, with there not being a cure and all.

Once an infected person recovers from Ebola, they can no longer spread it, other than through semen. People who recover develop antibodies that may last for at least 10 years. These antibodies may be critical in the development of a viable treatment for the virus.

There is no evidence that mosquitos or other insects can transmit Ebola. Only mammals have displayed the ability to become infected and spread the virus.

Understanding and Preparing for an Outbreak

The 2014 West African Ebola Outbreak has spread into Europe and the United States.

The WHO admits that this crisis will get much worse before it gets better.

Are you prepared for an outbreak?

What should you do to prepare?

Ebola: Understanding and Preparing for an Outbreak, addresses these, and many more questions.

Written in a clear and concise manner, with the reader that has beginning or intermediate knowledge of the Ebola Virus and disaster preparedness in mind, this book explores the following topics:

Chapter 3: The History of Ebola

Chapter 5: Early Stage – What to do Now

Chapter 7: Crisis Stage – An Epidemic in Your Area