Scientists believe that a large scale nuclear war would wreck havoc with the atmosphere, causing nuclear winter, catapulting large amounts of soot, dust, and smoke into the Earth’s stratosphere — blocking out the sun for several months. Temperatures plummet. Will the next ice age follow? How to survive. 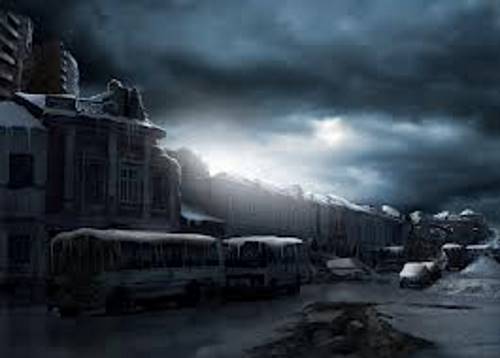 You hear the explosion in the distance while sipping a cold drink from your mountaintop estate. You’ve heard guns before. You’ve heard tanks fire. You’re a Desert Storm veteran, you’ve heard bombs as well.

But you’ve never heard anything like this. As the explosion continues to roar several miles away, you look out the window as a mushroom clouds swirls up into the sky, almost like a tornado, way out in the distance, somewhere near the horizon. Suddenly, what just happened clicks. You drop your drink.Someone detonated a nuke. That big city an hour’s drive away on the freeway — is now history.

The good news? The nuclear bomb went off a great distance away from you. The bad news?

Nuclear winter may be on it’s way shortly.

What is Nuclear Winter?

Nuclear winter is a theoretical concept. In short, many scientists believe that a large scale nuclear war would change the global climate in great proportion. This is because such a war would likely catapult large amounts of soot and smoke (aerosol particles) into the Earth’s stratosphere. Along with this, the ash and dust (which could settle in the stratosphere for months or even years) would likely travel by wind over a great distance to create a wall between the Earth and the sun.

In 1990, a group consisting of R.P. Turco, O.B. Toon, T.P. Ackerman, J.B. Pollack, and Carl Sagan (called TTAPS based on the last names of the participants) wrote a paper entitled, “Climate and Smoke: An Appraisal of Nuclear Winter”. In this controversial paper, the authors attempted to outline what would happen weather-wise as a result of a nuclear war. Here’s what they predicted…

Ten to 25% of soot injected would be removed by precipitation. The rest would ride atmospheric winds and spread across the Earth.

If it were to happen in July (a July smoke injection): There would be a 22 degree C drop in mid-latitudes and 10 degree drop in more humid areas. Further, the authors estimated a 75% drop in rainfall, and as much as a 90% drop in visibility in high smoke areas.

Beyond that the authors hypothesized that the ozone could be depleted greatly, leading to a huge increase in dangerous UV radiation seeping through to our world below.

Not exactly great news, huh? Good thing is that many scientists have more recently theorized that nuclear winter wouldn’t have anywhere near an effect so devastating.

What’s the truth? At the rate things are going in the world, with nuclear proliferation and rumors of terrorists seeking nuclear weapons, we may find out the hard way.

A decade or more of lasting effects?

Still, a study gone over at the annual American Geophysical Meeting in December of 2006 cited that even a small scale regional nuclear war could mess with the global climate for a decade or more. So, even if the TTAPS crew did overestimate things, the possibility of nuclear winter, especially considering the fact that we’re experiencing obvious global climate change without any such happening, is something to worry about.

After all, the possibility of these strange climactic events all coming together at once couldn’t be a good thing.

Add in the fact that countries like Iran are North Korea are now entrenched in the nuclear game, and the outcome looks even bleaker.

Can I Survive Nuclear Winter? Dealing with UV radiation – First order of business is the fact that ozone depletion could cause an abundance of UV radiation to seep through into our atmosphere. So, we would need to deal with this excess radiation, which in high amounts can cause skin cancer and eye problems (especially to the cornea). In fact, eye damage can actually occur without any pain or discomfort.

In other words, without warning. Here are some things to consider.

1. Be covered from head to toe when under UV exposure. In other words, protect your skin!

2. Wear a hat and stay in the shade as often as possible (this is one thing that may be easier than it used to be if a nuclear winter were to occur!).

3. Use sunscreen with a high UV protection factor.

4. Protect your eyes. Sunglasses can do this, as can lab safety glasses and / or goggles.

5. Remember that children are more susceptible to UV radiation. Protect them without fail.

Dealing with the cold

We really have no idea how cold it could get during a nuclear winter. Some, like the TTAPS crew, have proposed that it’s going to get real cold. Freezing temperatures. However, there is a growing feeling in the scientific community that these projections were way too strong. Regardless, with the already changing global climate, it’s always better to be safe than sorry.

Here are some considerations in dealing with a longstanding cold spell.

1. Have emergency heating supplies on hand. Remember that if a nuclear war were to occur, electric, gas, and oil might be off the table. Thus, it might be prudent to have a stove and a surplus of firewood at your home. Further, it couldn’t hurt to have excess supplies of your preferred heating fuel stored away safely somewhere.

2. Have appropriate clothing on hand. Remember that clothing in frigid conditions should keep the body warm, protect the outer extremities, allow perspiration to disperse, allow free movement, and be comfortable. Thus, it is for the most part better to have several layers of clothing on rather than just one very thick layer. This is because the extra layers allow easier movement. Further, perspiration disperses more readily with several layers than with one.

Beyond that, it would seem important to have boots, gloves, and sunglasses / goggles on hand. This may seem obvious to northerners, but remember that a nuclear winter could also reach those in warmer climates not accustomed to such weather.

3. Become familiar with methods used by people in northern states and Canada to winterize their homes. Have tools for home repair, excess attic and basement insulation on hand, even spray foam insulation so that if the crap ever does hit the fan — and temperatures around the world plummet — you’ll be ready, and able to add insulation to key areas of your home. You just might make it through a really cold winter.

Have a plan for food

Remember that a longstanding winter would, of course, impact our ability to grow food (also remember that in a nuclear winter, the amount of sunlight and precipitation would change). So, food would no doubt become an issue even if the rest of our social structure remained intact.

Therefore, finding ways to produce food on your own or within your social network would likely become vitally important. Initially, though, you might want to have a significant amount of non perishable food and water on hand. In fact, no matter what the emergency this could become needed (tsunami, regular war, a terrorist attack of a different sort, etc.).

In other words, having a food supply on hand is a necessity in this day and age. Have one ready.

Seems silly to mention, right? On the other hand, the point cannot be overstated. After all, the consequences of a nuclear conflict will go well beyond global climate change and a nuclear winter. Depending on the size of the nuclear conflict, there could be widespread social disorder and chaos.

In other words, be ready to protect yourself and your family.
No one really knows how a nuclear winter would look. It’s a hypothetical set of circumstances. Scientists do seem to agree that climate change would certainly occur because of a nuclear war (even a small, regional conflict). Therefore, as with anything, you need to assess whether you believe we’re on the doorstep of a possible nuclear conflict. If so, best start getting ready now.