It seems like everyone knows that a financial collapse is coming. The only real question is when it’s going to get here. The Fed is working overtime trying to shore up the dollar, but that can only go on for so long; eventually, what they’re doing is going to catch up with us all and when it does, the fall will be even greater. 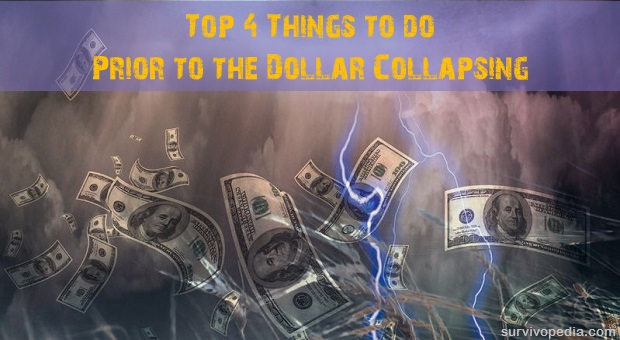 A financial collapse is much different than what most people imagine. It’s not a general breakdown in society and we don’t go back in time 150 years, living in the times of our great-great-grandparents. The two big signs of a financial collapse are high unemployment and runaway inflation. So, whatever preparations we make for the collapse, have to help us get through those two things.

I’ll have to say that there is no surefire way of avoiding being affected by the collapse. What you can do, however, is lessen the impact that the collapse will have on you and your family. You do this by trying to make sure that you are protected from the parts of the collapse which will have the greatest impact.

To start with, make an honest evaluation of your job, looking to see how vulnerable it is to a financial collapse. Jobs that are involved in any way with luxury goods or services will be the first to go.

The most secure jobs will be those which supply essential services, followed by those that provide goods and services which people need to survive. Since people won’t be able to afford to buy new cars and appliances, repairing these types of items will be a very secure job as well.

If your job doesn’t look like it will be very secure in the event of a financial collapse, you might want to consider changing it, before it’s too late. Better to change it now, even with the bad job market, than to wait until you lose your job.

Another thing to consider is starting a sideline business, especially if it provides essential goods or services. Not only can that augment your income, but it will also provide you with something you can fall back on, if you lose your job when the collapse comes.

The next thing to take a look at is your debt. With prices skyrocketing due to high inflation, you’re likely to have trouble paying off your debt. This could lead to losing your car, furniture or home. The best way to solve that is to get out of debt before it’s too late.

I realize that’s a problem for most people, as the reason they have debt is that they spend more than they take in. The average American family lives on 110% of their income. However there are some things you can do.

If you are making car payments on two cars, like many families are doing, try and sell at least one of those cars and replace it with an older, but mechanically sound car, which you can buy for cash. That way, even if you lose the car you’re making payments on, you’ll still have one car.

You may want to consider downsizing your home as well, especially if you’re at the point of having an empty nest. Ideally, you’ll want to sell your house and buy one that you can pay cash for, out of the proceeds of the first house’s sale. Of course, few people will be able to do that. The better a deal you can get, and the lower payments you can get, the better.

It seems that pretty much everything is in short supply during a financial crash, especially the things you need to have in order to survive. More than anything, food becomes hard to get.

Stockpiling food can actually be seen as an investment, as inflation will hit food the hardest. You’ll be able to smile when you’re eating your $3.00 per box breakfast cereal, while everyone else is paying $12.00 for it.

In addition to stockpiling food, it would be a good idea to start developing means of producing your own. It takes at least a year to get a vegetable garden producing well, so you don’t want to wait until the crisis hits to start your garden.

Start now, so that you can learn how to do it efficiently and build up good soil for growing your plants in. While you’re at it, take a look at growing chickens and fish as well, both of which are excellent sources of protein.

Besides food, you want to be sure that you have a descent stockpile of other necessities. Personal hygiene products may be a problem finding, as well as over-the-counter medicines. Don’t get carried away preparing for the zombie apocalypse, but make sure you’re ready with the basics.

There are probably a few people laughing at this heading, but that’s okay. Most of us have some sort of investments, even if we don’t think we do. Things like real jewelry (not costume) retirement accounts and stocks through our workplace are all investments, even if you don’t look at them that way.

Your best investment is getting out of debt. If you have $20,000 in a retirement account, you’re probably earning about 1% interest on it. At the same time, you might be paying 5% interest on your home. So, you’re losing money faster than you’re earning it. If you pay off your home, you have a net gain of 4.5%, even if you don’t have any money on hand.

The only investments that are secure during a financial collapse are precious metals and real estate. While it may be hard to sell either of them during the collapse, they are highly likely to retain their value or even appreciate in value. If you have other investments, you may want to consider selling them and moving the money into your home or into purchasing precious metals.

Before even considering investments, you want to make sure that you have enough food and other supplies on hand. Ultimately, they are a much better investment than anything, even gold. Not only that, they’re an investment which can help keep your family alive; gold can’t do that.

Here’s a somewhat risky strategy you may want to consider. Let’s say that you have $30,000 in investments right now, but you owe $100,000 on your home. Pulling that money out of your investments and putting it into your home may not be a good idea.

Once the gold and silver have appreciated enough in value, sell them and pay off your mortgage. That way, you own your home free and clear, so it can’t be taken from you.

Now, here’s the risk. I haven’t been able to find any documentation on it, but there’s supposedly a clause that allows banks and mortgage companies to reevaluate and adjust the value of your mortgage, in the case of a financial collapse. If that’s true and if that were to happen, you might not be able to pay off your mortgage using this strategy. Before trying to pay it off, check with your lender.