The Super-EMP weapon exists, and we apparently know that at least Russia, N.Korea, and China have them. Perhaps others? Are Iran’s nuclear centrifuges (apparently thousands of them are enriching uranium) – spinning up a Super-EMP? 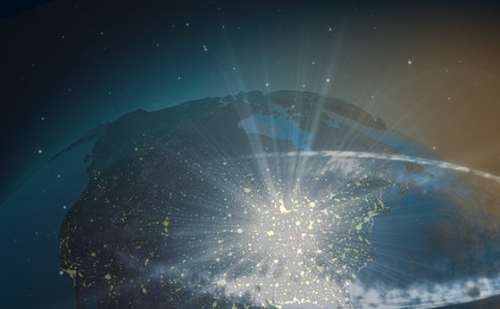 Because of the recent reports that the US is ‘giving in’ to Iran with regards to some of the key demands surrounding a nuclear deal (U.S. negotiators are said to have given up ground on demands that Iran be forced to disclose the full range of its nuclear activities), one wonders if they might already have sufficient materials and centrifuges to continue their probable bomb-building (and/or Super-EMP) efforts…

According to Dr. Peter Vincent Pry, “Miniaturization to develop a nuclear warhead is not difficult to do, and can be accomplished even without nuclear testing.”

“North Korea and Iran both have strategic reasons to mislead and conceal from the West the true status of their nuclear and missile programs. They intend that the U.S. and its allies will underestimate those programs, fail to act in time to stop them, and be strategically surprised when North Korea and Iran become nuclear super-powers,”

According to Dr. Pry, “In fact, almost certainly, North Korea now possesses a highly advanced third generation nuclear warhead that could destroy the United States with a single blow.”
A Super-EMP weapon would perhaps be a perfect means for Iran’s regime to put an end to ‘the Great Satan’ (as they call us).

Why? Because a Super-EMP will devastate the nation’s electrical power grid. And I believe that you all are smart enough to know what will happen next…

One nuclear Super-EMP attack could collapse the nation’s electric power grid which in turn would bring down most of our critical infrastructure systems –communications, transportation and distribution systems, banking and finance, anything that needs electricity to ‘work’. Modern civilization would end, as would the lives of tens of millions who depend upon these systems.

A Super-EMP attack on the U.S. would cause much more damage than a primitive nuclear weapon, and will likely result in catastrophic consequences that will be irreversible. A Super-EMP attack would inflict maximum damage and virtually ensure a world without America.
In 2004, the Congressional Electromagnetic Pulse (EMP) Commission was warned by a delegation of Russian generals that Russia had developed a “Super-EMP” nuclear warhead, and that design information for this weapon had leaked to North Korea. Given Iran’s alliance with Russia (and having apparently forged some alliance with N.Korea), who’s to say that Iran does not have the ‘know-how’ to build their own? Answer: One would be sticking their head in the sand to believe that they don’t ‘know how’…

Russia also has something called the Fractional Orbital Bombardment System (FOBS), that would use an ICBM like a Space Launch Vehicle to put a nuclear warhead into orbit, like a satellite. They have apparently shared this with North Korea (and who else?). Instead of using the ICBM to lob a warhead on a more accurate arcing ballistic trajectory, the FOBS would loft the warhead into a partial orbit. FOBS could reach any nation or threaten any target anywhere on Earth.

The primary purpose of FOBS is a surprise attack. The first warning of the attack would be ‘lights out’. North Korea and Iran have made clear in their threats that they wish to take down the United States. They perceive themselves to be at war with the U.S. and would like nothing more than to destroy the largest and most successful society on Earth.

Remember when it was thought that a particular satellite which N.Korea had launched was really an orbiting Super-EMP? Who’s to say that Russia (for example) does not have any similar orbiting ‘satellites’ which are instead Super-EMP weapons?
I feel that we sometimes need to talk about such subjects (being a preparedness blog and all…), because by ignoring it we are fooling ourselves that these risks do not exist. Given the recent escalation of tensions between the US (NATO) and Russia, and now the upcoming nuclear ‘deal’ with Iran (which evidently will be ‘weak’ and enabling them to continue), and given the hatred toward the US by many others – it seems that one well placed Super-EMP could make for a very bad day. Who’s to say that all of those who have the capability to ‘launch’, are all sane? Clearly, there are those who openly say they will do it!

on the Commission on the Strategic Posture of the United States;

as Director of the United States Nuclear Strategy Forum;

on the EMP Commission;

as Professional Staff on the House Armed Services Committee;

as an Intelligence Officer with the CIA responsible for analyzing nuclear strategy;

and as a Verification Analyst at the U.S. Arms Control and Disarmament Agency.