Should the world as we know it ever fall apart as a result of an economic collapse, a massive natural disaster, cyber attack or widespread pandemic there will be millions of people looking for food, clean water and other essential resources. 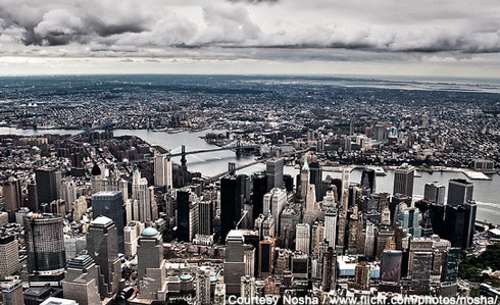 The cities will be plagued with violence and supply shortages. Government officials will, as Homeland Security has previously admitted, not be able to provide any meaningful support. The masses will be left to fend for themselves.

But just because the whole system around us falls apart doesn’t mean there won’t be any safe havens.

According to researchers at Cornell University who recently published a study analyzing the spread of a deadly virus and how it would affect the population, if you want to improve your chances of survival you should head for the hills.

But the researchers warn that even this may not be enough, noting that we are likely “doomed” either way.

Researchers from Cornell University have now discovered that the correct thing to do should the dead start to walk the earth is to literally head for the hills.

They found that cities would fall quickly, but it would take weeks for zombies to penetrate into less densely populated areas, and months to reach northern parts of the mountain-time zone.

Their advice is to head for the Rockies.

The research involved results from simulations the researchers wrote themselves, similar to modelling chemical reactions.

The Cornell team are less optimistic about our prospects.

The abstract for their research ends with the line: ‘We build up to a full scale simulation of an outbreak in the United States, and discover that for “realistic” parameters, we are largely doomed.’

After a zombie outbreak, you might want to run for the Rocky Mountains, at least according to researchers at Cornell University.

The research team used statistical mechanics to figure out that this is the safest place to live during a zombie apocalypse.

However, the research wasn’t completely fictional. The models they used could also be applied to real-world disease outbreaks.

The study specifically models a viral outbreak, in this case, a zombie viral outbreak. But realistically speaking the statistical mechanics analysis suggest what many in the preparedness community already know: cities will be death zones and your best chance at survival will be sparsely populated areas.

James Rawles, founder of Survival Blog, has discussed the concept of the Golden Horde extensively in his writings. The Horde is best described as the masses of people who will be migrating from mega cities in search of food and other resources in the aftermath of a major collapse that results in supply breakdowns. And though a zombie virus may be fictional, the golden horde and a zombie horde would behave in much the same way, razing everything in their path.

As hordes spread out from major cities there will be a widespread die-off for a variety of reasons, namely the lack of sustenance. And, given that there will likely be no functioning gas pumps because of a lack of electricity there is a strong possibility that most people will never make it out of about a 300 mile radius of a major city simply because they will only be able to go as far as a single tank of gas will take them.

This means that those living in rural areas, especially mountainous rural areas, will have the best chance at surviving a zombie or any apocalypse. We recently published a map of the areas you want to avoid during an emergency. The map is based on population density, something that survival expert Joel Skousen says is the single biggest threat you’ll face in a collapse scenario:

But the gut wrenching reality is that if something goes down and you find yourself in the middle of a major city and you have failed to plan ahead you’re going to have a serious problem.

If we took a survey, probably more than 95% are not fully prepared. This is not good. Is it the end of the world if your family doesn’t own a retreat? Of course not, the reality is that most Preppers can’t afford a separate fully operational retreat, and that’s ok.

However, not having a pre-arranged destination of some kind, with pre-positioned supplies is absolutely not acceptable. This could be located at a fiends or relatives home in the country, or a group purchase of a retreat, even a small parcel with a stream and cached supplies is better than nothing.

Excerpt via: The Gut Wrenching Reality: One of the Best Bug-Out Strategy Guides You’ll Ever Read

Once a breakdown starts it will be unstoppable and it will completely overwhelm a city within just a few days, according to The Prepper’s Blueprint author Tess Pennington.

That means your best chance at surviving will be for you to have a preparedness plan in place before it happens.

The idea of a zombie apocalypse is far-fetched and in the minds of many marginalizes the real threats posed to our civilization. Any number of events could lead to an apocalypse-level crisis that leaves millions dead. Even our government has warned about the possibility of long-term disasters. And the fact is that FEMA and the Department of Homeland Security have spent billions of dollars on the aforementioned supplies in anticipation of such an event.

But all of those supplies they are stockpiling will likely never find their way to the general public, as they are reserved for government officials and their families who will be transported to secure underground facilities in the mountains.

You on the other hand, will be left on your own. That means whatever preparedness plan you make today will be all that’s available to you  should the zombies start roaming the land.