Do you have a backup plan (Plan B) for when your preps go up in smoke? When everything fails, and everything goes wrong fast? When all you have is just the clothes on your back? Introducing “Plan B”… Get the Hell Out of Dodge  Included: 10 Factors to Seriously Consider When Drafting a “Plan B” for SHTF. 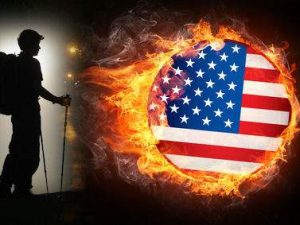 I’m talking about surviving an “All Hell Breaks Loose” global series of events that will turn life upside down for a lot of people fast.And somewhere in the middle of all this you show up on the scene, either by yourself or with a friend, or if you’re lucky, maybe you’ve got your spouse and kids along side as well.

No worries, right? I mean you’ve got all your preps… months (actually, more than 5 years now for some of you) of stocking up on food, water, and survival supplies.

You’ve got a shelter in your basement and a trail leading to a small pick up truck parked out back under a canvas, with a full tank of gas, ready to be loaded up with your preps at a moment’s notice so you can hit the road in the case of a widescale evacuation. It all looks good on paper, but do you have a “Plan B”, to survive this sudden SHTF, should something unexpected go wrong?

Before you come up with a plan B, let’s consider some important points. In the case of SHTF coming to your community — specifically those who live in bigger cities and the suburbs of bigger cities — would be wise to consider evacuation early on, perhaps even the first day.

Rampant crime and looting (you can bet there will be a few rapes and beatings taking place) could be a threat, that just depends on who lives in your neighborhood, and what these people might turn into a few hours (and especially days) into SHTF, when — from their perspective — the police have disbanded or are spread thin (a number of police may have fled with their families) and of course the stores are no longer selling food and gas stations have quickly ran out of gas.

Your Preps Went Up in Smoke

Literally — that’s what happened. The EMP (that’s what you and your neighbors are assuming) shut down power across a multi-state region, and air traffic control lost communications with a large number of aircraft, including commercial jets. Some how a mid air collision took place in the skies over your city, and jet parts have rained down into your neighborhood, setting several homes on fire — including yours.

Or possibly a low yield nuclear weapon detonated some 10 miles away, and a shock wave brought just enough heat and debris to your distant location to cause enough damage that several area gas lines were set on fire, you know the same gas lines that carry natural gas for heating and cooking into homes. Those natural gas lines are highly flammable, remember. Now hundreds of fires burn around the area.

When It Comes to Preps, There’s No Guarantees

Whatever takes place in an SHTF, just remember there’s no guarantee that your preps and Plan A are going to be what saves your life.

How quickly you can revert to Plan B, when everything else fails on you, may be what saves you and your family (and maybe a few friends) that day.

As explained in a previous article on surviving social collapse, you only have a very short window of time to escape danger. How keen you are to recognize that danger before it occurs — and then react appropriately when it does — could mean the difference between life and death.

In Case of EMP

Anyone preparing for the possibility of a nuclear detonation and simultaneous EMP (electromagnetic pulse) should take adequate steps to protect small electronic devices and even flashlights and anything else with small circuits or wiring. While some of these may escape harm from an EMP, others may be damaged, and now you’re stuck with a survival essential that you can’t use.

10 Factors To Seriously Consider As “Plan B” for SHTF

1. Backup preps stored at a second location that you can get to, even if you have to get their on foot (don’t be afraid to walk or bike a few miles).

2. Rendezvous plans — where you and your family or friends agree to meet at a certain time following SHTF.

3. Backup rendezvous plans — If location A is a no-go for any number of reasons, do you have a nearby location B to meet at? Designate a location B, and designate a time frame.

4. Communications — Do you have the means to communicate via short wave radio and or marine band radio?

5. Retreat — If your area is overrun by an enemy (or rioting), do you have a plan of travel (a route) that is most likely going to allow you safe passage? Know that route well before hand, and walk that route a few times, and look at areas in the terrain that would allow you to take shelter, should you have to hide from a pursuing enemy on short notice.

6. Severe Weather — Heavy rain can be a factor in some areas at certain seasons of the year. Normally low rivers or streams can be running high, or area flooding can cut off certain areas. A perfect plan for escape can be stopped in its tracks if your route fails on you due to any number of events that might take place. Have a plan for dealing with severe weather that is possible for your area of the country. Severe weather can be a game changer.

7. Injury(s) — You or someone you care about may have an injury. Have a plan to stay mobile in the event that someone is injured, if you need to leave your home in a hurry (worst case scenario have a wheel barrow out back or in the garage; you or a friend may have to take turns carting an injured person out a safe distance in that wheel barrow from where ever you need to flee from).

8. Crime — If you are cornered, jumped, ambushed or simply robbed in any possible way, what objects can you conceal on your person so that you don’t lose everything? A typical robbery means your pockets are emptied and your jacket and backpack emptied. So you may get away with hiding objects in your socks, in your shoes, in an ankle holster, in a band tied around your abdomen — such as a back brace — etc. Think like a spy — where would they conceal objects, and what objects can you hold on to, in the event of a robbery, that can be tools to your survival?

f.) Iodine drops (small bottle that can be used to decontaminate water for drinking in an emergency)

… With all these rolled up zip loc bags concealed on your body, how do you keep the plastic from making noise as you move around? Try layering each zip loc bag in duct tape — the duct tape will both strengthen the zip loc bags and also keep the pastic from making any noise. When it comes time to open, use your knife to cut open an end just big enough to allow use, that you can easily put a piece of duct tape over again, in order to close.

In the end, you have several pieces of survival gear that you’ve managed to hold on to, when the average person would have lost everything in that robbery, or should a person have had to ditch their preps and flee.

9. Detention — If you’ve been detained by law enforcement or corraled by “friendly” military forces, you may find yourself in a refugee camp, that — though it looks like a safe place to evacuate to — you may find yourself treated more like a prisoner if authorities on site are not allowing people to leave. It could be an ok place (short term) to get a few Red Cross meals and food and water and catch up on your sleep, but consider as a “long term” option — the longer you are there — the more possibilities exist that something can go wrong. So have a plan to get out while you can.

Disease can spread, internal strife can take place, an outside military force could overrun the “friendly” forces, and your refugee camp just went from refugee camp to concentration camp — and now you’re a prisoner of war — possibly like the Jews in World War II. Possibly like many Christians and other politicals prisoners in modern day North Korea. Don’t stay at that refugee camp, if you don’t have to.

10. Learn a thing or two about living off the land. Have a good idea about what kind of versatile survival gear could help you actually survive all that’s happened. Consider that some moderate strength training and self defense may be something that helps you escape harm — just in case SHTF ever actually takes place.

Can We Escape SHTF?

Finally, realize that this SHTF that looks like it’s barreling down on America as apocalyptic-driven Islamic groups like ISIS take control of Muslim armies in the Middle East — and now (according to mainstream news reports in recent days) a number have shown up in Juarez, Mexico, just south of the U.S. border and appear intent on harming Americans — might not be an accident.