Think about this scenario: suddenly, all electric devices stop working, and your first thought is that the power grid is down due to a temporary malfunction. You think that everything is going to turn back to normal in minutes, but six hours later you’re still in the dark. Is this just a simple blackout? Or the feared EMP has happened? 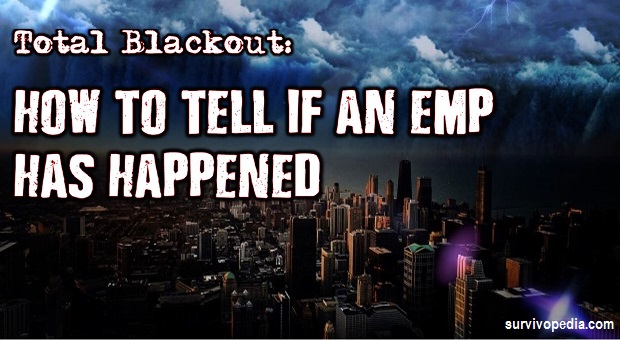 There is at least one way to get an easy answer. All you need to determine whether you are experiencing a regular power outage or an EMP are only three transistor AM/FM/ Shortwave radios. Find out how this works in the following article.

How to Apply the Three Radios Method

Using three transistor AM/FM/Shortwave radios, an improvised Faraday cage and a simple SOP, you can determine whether you are experiencing a simple blackout or an EMP and if it is an EMP, whether it is geomagnetic or nuclear in nature.

Let’s see the steps that you should take to find out if the EMP is the one that caused the blackout:

After the power goes out, check the first radio. If you hear your local radio station, the outage was probably not caused by an EMP or it was a very minor one.

If it was a blackout, you should still pickup radio stations since they have backup power. If it was a geomagnetic EMP, the radio will still function, but many local radio stations many not be transmitting because they have been affected by the EMP or because they were intentionally shut down to reduce the effect of a geomagnetic EMP since there is often forewarning.

In either case, you may be able to receive shortwave transmissions from outside the affected area since they travel very great distances. If you are able to receive transmissions, listen for news as to the cause, scope and expected duration of the outage. In a large solar storm of long duration, the second radio will still work, but it may be a day or so before you begin receiving transmissions again.

If the second radio is also dead, there is a significant probability that you have experienced a nuclear EMP. Remove the third radio from the Faraday cage. If the electromagnetic shielding provided by the Faraday cage is sufficient, and there are no leaks in the shielding, the radio should work. Depending on the extent, duration and repetition of the use of nuclear weapons, just realize that after a nuclear EMP, it will take several hours before shortwave transmission return to normal since the upper atmosphere will be disturbed and that subsequent nuclear EMPs could destroy the radio once you remove it from the Faraday cage.

The three radios should be known, good AM/FM/Shortwave radios, but you can use cheap models for the “victim” radios. The certainly of this experiment with a group of three radios will not be absolute, but it will give you a reasonable degree of certainty. Repeating the observations with other radios in your community, you can arrive at a greater degree of certainty about what is happening.

Why This Method Works

In order to understand the significance of geomagnetic vs nuclear EMP, and why this type of experimentation works, you must first understand that there are two main types of EMP: EMP caused by man and EMP which occurs naturally.

Of the natural origins of EMP, the type scientists believe is the most probable comes from our sun, when it spits out a CME that lobs an electromagnetic solar storm which intersects with the earth’s orbit. It interacts with the Earth’s magnetic field, resulting in geomagnetically induced EMP. This type of EMP will not affect things that are not plugged into power lines, phone lines or other long conductors which run parallel to the surface of the Earth (and consequently parallel to the Earth’s magnetic field) and essentially act as EMP antennas.

So, an EMP that originates from the sun, should not affect cars or battery-operated microelectronics that are not plugged into a wall receptacle, but they can, and do cause blackouts.

A blackout caused by a geomagnetic events could affect an area as small as a portion of a city or county or could be so large that it affects entire continents or anything in between. A protracted geomagnetic event or EMP tracing its origins to sources outside our solar system or even our galaxy, could conceivably knock out every electrical grid on Earth, but we are most comfortable believing that the chance of that happening is so infinitesimally small that is unreasonable waste time considering it. But, what people are comfortable believing does not always line up with reality.

Let’s say we accept the optimistic view that in all probability, all naturally occurring EMP’s in our lifetime will originate from the sun. When EMP originates from the sun, you may very well receive advance notice. In this case, power companies should preemptively shut down power plants in the area the EMP will affect, de-engergizing the grid, to some extent, and helping to prevent cascading failures and help limit the effect of the EMP.

In a best-case scenario, this type of EMP could just cost us a big pile of money and cause a temporary, possibly self-inflicted, blackout of limited scope … no airplanes plunging out of the sky, nuclear meltdowns, freeways instantly transformed into parking lots or other catastrophic consequences that Hollywood loves to depict.

In a worst-case scenario, a large solar storm will destroy the grids large transformers which are all custom-built and have lead times measured in years. The world lacks the production capability to replace them in less than years. This would be complicated by the fact that no one knows how to rebuild the grid from scratch and reboot it. There is not book or class on the subject. The grid was built one piece at a time and grown slowly. There is no template for patching it back together after such an event. A large solar storm connecting with the Earth is inevitable. It is not a “maybe.” It has happened before and will happen again.

So how do you get any forewarning of a naturally occurring EMP? If you have your feelers out, you may very well receive advance warning via our emergency communications channels since equipment constantly monitors the sun. If you do not hear about beforehand, other folks probably would, but even if you were alone, you could deduce that it was an EMP and not a garden-variety power outage by the fact that it would be accompanied by an interruption in RF communications.

So when in doubt, grab a transistor radio and tune in to your local emergency station. If the radio seems to be working, but the station is off the air, your area may have experienced an EMP of natural origin but may still be able to receive stations transmitting from farther away. Determining the scope and duration will require more a more persistent intel collection effort on your part.

Man made EMP occurs when nuclear weapons are detonated high enough in the atmosphere to excite high energy electrons via Compton Scattering. This results in a thousand-fold increase in the EMP that would normally accompany such a nuclear detonation. EMP theory is common knowledge available to anyone. Specific weapons programs and testing is all classified, but it would be beyond naive to think that both we and our enemies have not developed super-EMP weapons.

Outside game theory, it may not possible to accurately predict the probability of when EMP weapons will be used, but rest assured that our enemies have been developing them … likely for 50 years or more.

2 Replies to “Total Blackout: How To Tell If An EMP Has Happened”