Editor’s Comment: So far, there hasn’t been a huge economic “event” in terms of a stock market crash. The Fed’s actions have been very careful and general. The media has deflected focus on the long term effects of a market with total central bank intervention, even as the American dream sharply erodes away.

The economies of the world are all tanking, the oil price is plunging, and the combined effects of bad economic decisions and real world performance is leading to consequences that will be severe, but may not be seen except in the long term view.

What will this news mean for jobs, opportunity and employment? 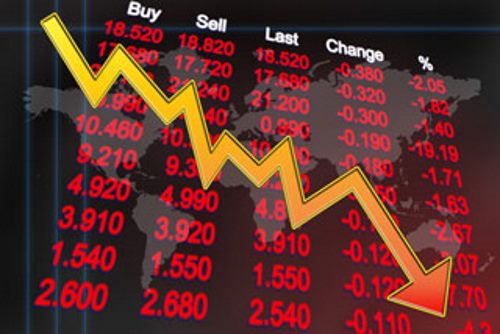 Right now, stock market wealth is being wiped out all over the planet, and none of the largest global economies have been exempt from this.  The following is a summary of what we have seen in recent days…

#1 The United States – The Dow Jones Industrial Average is down more than 2000 points since the peak of the market.  Last month we saw stocks decline by more than 500 points on consecutive trading days for the first time ever, and there has not been this much turmoil in U.S. markets since the fall of 2008.

#2 China – The Shanghai Composite Index has plummeted nearly 40 percent since hitting a peak earlier this year.  The Chinese economy is steadily slowing down, and we just learned that China’s manufacturing index has hit a 78 month low.

#3 Japan – The Nikkei has experienced extremely violent moves recently, and it is now down more than 3000 points from the peak that was hit earlier in 2015.  The Japanese economy and the Japanese financial system are both basket cases at this point, and it isn’t going to take much to push Japan into a full-blown financial collapse.

#4 Germany – Almost one-fourth of the value of German stocks has already been wiped out, and this crash threatens to get much worse.  The Volkswagen emissions scandal is making headlines all over the globe, and don’t forget to watch for massive trouble at Germany’s biggest bank.

#5 The United Kingdom – British stocks are down about 16 percent from the peak of the market, and the UK economy is definitely on shaky ground.

#6 France – French stocks have declined nearly 18 percent, and it has become exceedingly apparent that France is on the exact same path that Greece has already gone down.

#7 Brazil – Brazil is the epicenter of the South American financial crisis of 2015.  Stocks in Brazil have plunged more than 12,000 points since the peak, and the nation has already officially entered a new recession.

#8 Italy – Watch Italy.  Italian stocks are already down 15 percent, and look for the Italian economy to make very big headlines in the months ahead.

#9 India – Stocks in India have now dropped close to 4000 points, and analysts are deeply concerned about this major exporting nation as global trade continues to contract.

#10 Russia – Even though the price of oil has crashed, Russia is actually doing better than almost everyone else on this list.  Russian stocks have fallen by about 10 percent so far, and if the price of oil stays this low the Russian financial system will continue to suffer.

What we are witnessing now is the continuation of a cycle of financial downturns that has happened every seven years.  The following is a summary of how this cycle has played out over the past 50 years…

A lot of people were expecting something “big” to happen on September 14th and were disappointed when nothing happened.

But the truth is that it has never been about looking at any one particular day.  Over the past sixty days we have seen absolutely extraordinary things happen all over the planet, and yet some people are not even paying attention because they did not meet their preconceived notions of how events should play out.

And this is just the beginning.  We haven’t even gotten to the great derivatives crisis that is coming yet.  All of these things are going to take time to fully unfold.

A lot of people that write about “economic collapse” talk about it like it will be some type of “event” that will happen on a day or a week and then we will recover.

Well, that is not what it is going to be like.

You need to be ready to endure a very, very long crisis.  The suffering that is coming to this nation is beyond what most of us could even imagine.

Even now we are seeing early signs of it.  For instance, the mayor of Los Angeles says that the growth of homelessness in his city has gotten so bad that it is now “an emergency”…

LA Mayor Eric Garcetti also issued a directive on Monday evening for the city to free up $13 million to help house the estimated 26,000 people who are living on the city’s streets.

According to the Los Angeles Homeless Services Authority, the number of encampments and people living in vehicles has increased by 85% over the last two years alone.

And in recent years we have seen poverty absolutely explode all over the nation.  The “bread lines” of the Great Depression have been replaced with EBT cards, and there is a possibility that a government shutdown in October could “suspend or delay food stamp payments”…

A government shutdown Oct. 1 could immediately suspend or delay food stamp payments to some of the 46 million Americans who receive the food aid.

The Agriculture Department said Tuesday that it will stop providing benefits at the beginning of October if Congress does not pass legislation to keep government agencies open.

“If Congress does not act to avert a lapse in appropriations, then USDA will not have the funding necessary for SNAP benefits in October and will be forced to stop providing benefits within the first several days of October,” said Catherine Cochran, a spokeswoman for USDA. “Once that occurs, families won’t be able to use these benefits at grocery stores to buy the food their families need.”

In the U.S. alone, there are tens of millions of people that could not survive without the help of the federal government, and more people are falling out of the middle class every single day.

Our economy is already falling apart all around us, and now another great financial crisis has begun.

When will the “nothing is happening” crowd finally wake up?

Hopefully it will be before they are sitting out on the street begging for spare change to feed their family.

Michael T. Snyder is a graduate of the University of Florida law school and he worked as an attorney in the heart of Washington D.C. for a number of years.

Today, Michael is best known for his work as the publisher of The Economic Collapse Blog and The American Dream.

If you want to know what things in America are going to look like in a few years read his new book The Beginning of the End.