First before I begin any discussion of firearms, if you are going to own I gun, and I think you should – you also need to get proper training. A gun in an untrained hand can put you at greater risk, than having no gun at all. 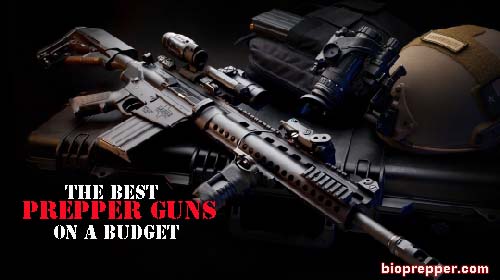 Now, that having been said, I am constantly asked what are the best prepper weapons for protection and survival? There is no single answer, because every situation is different and every person’s skill level is different. The best gun, or guns to put in the hands of an Ex-Marine, cannot possibly be the same for the average homeowner. Even amongst different branches of the military, Army Rangers debate with Navy SEALs over what’s the “best” gun, and the deadliest ammo!

About the only thing that we can agree on is that there is certainly no single gun that could suffice for every single survival situation. Now that is not to say that you need to build an arsenal, but you do need to have a selection of at least a few firearms to serve different purposes.

Even if you have never fired a shot, you probably know that there are three basic types of Firearms: Rifles, Shotguns and Handguns. Within each of those there are subcategories based on how the ammo is chambered and fired, – single-fire, automatic, semi-automatic, pistol or revolver – and the caliber (size) of the round.

At the bare minimum you should consider owning and learning to use at least one from each category – a long rifle, a shotgun, and a handgun.

As I say that is “bare minimum” Here is what I recommend:

If you want one, they are not all that different. If I had to make a recommendation, I’d go with the Ruger Mini-14 because of its ease or reconfiguration, and many accessories.

But I really do not recommend assault rifles. They are expensive to buy and maintain, they require a lot of training, and they jam – a lot. Most importantly, in a survival situation you are most likely to be defending yourself against thugs and marauders, and not heavily armed infantry. That is why I make the following recommendation for your “Combat Rifle” – a lever action .30-30. A lever action rifle, like my personal favorite, a Marlin Model 336, can fire just about as fast as any semi-auto assault rifle you can name.

It has a greater magazine capacity than most, especially if large magazines for Bushmasters and the like get banned, and it has much better trigger action than most any battle rifle you’d care to name – and jams a heck of a lot less. It shoots fast, is accurate and will bring down anything in North America, on four or two legs. It is commonly chambered for 30-30 Winchester or 35 Remington, and ammunition is plentiful and not too expensive. As a survival rifle, it is an excellent choice as it is lightweight, handy and easy to pack. Used Marlin Model 336s can be had for as low as $200 and even when new, are quite economical.

These are some pretty significant considerations. Think about it – you can buy two lever-action guns at around $200 each and a thousand rounds of ammo- about $500.00 more or less – for less than the cost of ONE state of the art assault rifle – $1200 & up – with enough money still left over to either get ANOTHER thousand rounds, or a handgun, shotgun, or a couple of .22’s.

Ultimately, to decide what firearms are right for you – you really have to think about what you most likely will be hunting, or defending yourself from. There is an old adage that says if you are hunting, then you need a hunting rifle, it follows therefore that for “Survival” you need a Survival Rifle. As I said earlier the best “survival” or backpack gun is the AR-7.

Beyond a go anywhere Survival Rifle such as the AR-7, I also recommend the Ruger 10/22. The Ruger 10/22 is one of the most popular and reliable .22 rifles in the world. It is attractive because of its many available upgrades, and after market accessories such as scopes and extended magazines. You must have a .22 in your cache. 22L ammo is cheap and plentiful, making a .22 rifle great to train with.

Big game hunting/counter-sniping rifles are the next group of guns to be considered. The selection of a big game rifle depends on the variety of game to be hunted. In the lower 48 states, a bolt-action rifle chambered in .308 Winchester or .30-’06 will normally handle most big game. Regional differences will determine exactly what you need. For example, in the plains and desert states, you might need a scoped rifled chambered in a flat-shooting cartridge such as .270 Winchester or .25-’06. No matter which chambering you select, it is important that you buy a well-made rifle with a robust action. Remington, Ruger, and Winchester among others all make guns with these qualities.

A shotgun is on my list of “ prepper weapons must have’s.” A shotgun is a staple for home defense and survival situations. Also called “scatter guns” aiming becomes less of a requirement, and they can be fired fast and repeatedly.

The Mossberg 500 Shotgun in 12 or 20 Gauge is one of the most economical and versatile shotguns you can buy. A shotgun has certain advantages and disadvantages over a rifle. Specifically a shotgun is a very flexible in that it can shoot a variety of loads from low powered small-pellet game loads, to heavy buckshot capable of taking down the largest game animals (or intruders).

The disadvantage is that a shotgun can be uncomfortable for women or small-framed shooters due to the recoil. But you can get around that with practice and training, and a reduction from 12 ga. to 20 ga. for smaller shooters. Used Mossberg 500s can be had for as little as $120.

You need at least one handgun. Here again you are going to see me depart from what you may think is “a given.” I do not recommend a semi-auto pistol like a 9mm. I say for self defense, survival, or home protection, you should always consider a revolver, over an automatic pistol because of the reliability and less likelihood of the revolver to jam. A revolver is inherently safe, and if a round fails, another trigger pull will be instinctive and chamber and fire the next round. The caliber should be no less than .357 magnum and maybe, preferably, a .44 magnum.

Hollywood and the assorted “gang-bangers” out there would have you believe that revolvers somehow became ineffective the day everyone started switching to autos – far from it. A properly loaded revolver of quality design and manufacture in the hands of a good shooter can stand and deliver the goods. No other handgun can compare with the .357’s stopping power when using 125 grain hollow-points. And no other weapon is as versatile in as many conditions as a good four or six inch barreled .38 revolver.

So to wrap up – I think the minimum home defense/survival “suite” of firearms you should own are:

Now it’s your turn! What do you think are the best prepper weapons to own?