Prepping for a major disaster is almost like preparing to embark on a great adventure. 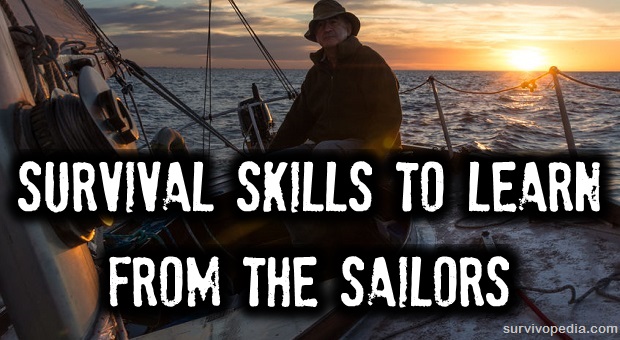 While stories like Treasure Island and Captain Blood were filled with resourceful men able to brave any situation, there are also other stories where the characters were less prepared.

No matter whether you still remember how the boys managed in Lord of the Flies, or how Alec Ramsey kept himself and the Black Stallion alive on an uncharted island, but all these stories point to ways that people at sea stay alive in extreme situations.

If you think about it now as then, sailors are still very much like astronauts. They must navigate both known and unknown waters for months or years on end. They must stay alive, while facing all kinds of dangers from nature as well as other people with hostile intentions.

Survival Skills To Learn From The Sailors

Obviously, in order to achieve that, sailors developed all sorts of survival skills, and I bet we can learn a thing or two from their experiences. Survival at sea depends upon a few factors, which include:

So, what can we learn from sailors in terms of survival? Well, the first thing to contemplate in any survival situation is finding water. It may sound strange, but thousands of sailors  died and got sick while at sea because salt water is not potable and they did not have enough fresh water to drink.

If you’re dehydrating and you drink salt water, you’ll die quickly from kidney failure. While we do have water desalination methods available today, they require enormous amounts of energy and may not produce enough potable water for your needs. Since the human body can’t live for more than 3-4 days without water, sailors developed alternative sources for staying hydrated.

One of the most common sources of water for sailors was their own urine. It may sound gross, but I’ve heard lots of stories not only from sailors (books mostly), but also from soldiers in World War 2 (the desert battles in Africa) or in the French Foreign Legion (the guys with the March or Die! motto, as tough as they come).

Drinking your own urine is a last resort measure for replenishing your bodily fluids and it can be quite dangerous because of the salts inside it. In order to make urine a bit safer if you are on land, simply pour the urine into a hole in the ground.

Next, place a container in the hole and put clear plastic over the hole. Hold the edges down with rocks. Add an additional rock in the center of the plastic. As the sun overhead heats up the ground, the water from the urine will evaporate, collect on the plastic covering the hole, and then drip back down into the container. Just remember that this method will also remove salts and minerals that you will have to replenish in some other way.

Another strategy used by sailors was to collect rain water. So, if it rains and you’re out of potable water, all you have to do is to collect it and funnel it inside a container. If you are going to store rain water away for future use, make sure that you know how to avoid problems created by stagnation. However rain water these days can also have all kinds of acids and other chemical toxins so it may not be safe to drink without purifying it first!

For purifying water, sailors usually mixed rum and silver coins into the water, as both act as a disinfectant. Sailors from past times did not have to worry about chemical pollution or heavy metals in the water. Modern survivalists must account for these problems when considering optimal ways to get clean and safe water to drink.

While at sea, fish are great not only as a food source, but also for alleviating thirst. The largest source of liquids in a fish  are located in their spine, their eyes and their flesh. To quench your thirst, you can cut open a fish, break its back and suck on it.

Now, let’s see about catching food. We know that sailors were confined on their boats for months or years in a row, so food could also be a serious problem without the capacity to improvise. Here are some common and plentiful foods that sailors took from the ocean:

If you have no fishing gear on hand, you can improvise with something as simple as a shoe lace and some shiny metal from a tin can as a hook. Sailors were also experts at fashioning slip nets and other traps from small weights, rope, and other items they had on hand.

We probably owe to sailors the ancient skill of preserving food for long time storage. How did they do it? Well, generally speaking, sailors consumed heavily salted meats/fish (sardines, pork, beef) during their long journeys, along with dried fruits and legumes. They also were to first to can fruits for long term storage. Basically, salted and/or dried goods can last almost indefinitely if stored properly.  That’s the lesson from sailors to be learned for preserving foods for a long time in a survival situation.

Grains and fruits can be dried in the sun/air before storing them in a cool and dry place. Meat can also be preserved for long periods of time through drying; but first it must be cut into thin strips and salted. Salt is excellent at preserving meats and vegetables, as it kills bacteria and dries moisture. Salt can be used together with smoking, drying, and other methods for long term food preservation.

Now, with food-preserving taken care of, let’s see about “shelter”. How were sailors able to survive for days or weeks (even months) when they were thrown overboard or the ship capsized?

From sailor’s experience, when stranded in the open sea, signaling is better than trying to paddle toward the rescue ship on the horizon. Remember that trick in any survival situation: try to signal your presence to rescuers from the distance, using smoke, fire, letters written on the ground/in the snow, as opposed to trying to go to them.

In a hot climate, it’s better to travel at night and sleep during the day. You should also try to  keep traveling in the same direction until you reach civilization! The North Star shows you geographical North, and was commonly used by sailors for navigation. Star navigation can be used on land or at sea provided you know how to do it accurately.

Have you ever heard of the sailor’s knot? Knowing how to tie a knot that doesn’t slip when wet, is fairly easy to tie and untie and will not jam is very important. Even though sailors fashioned all kinds of knots, the Sailor’s Knot, aka the Carrick Bend or the Anchor Bend is one of the most important and useful ones for survival.

Here’s a video you can use to learn all about sailing/boating knots.

Another survival-related thing to learn from ancient sailors is to always carry a good knife wherever you go. In any survival situation, carrying a good quality knifecan make the difference between life and death. Knives can be used for a lot of things including self defense, hunting game, preparing food, digging, cutting wood etc.

Sailors also used to carry a specially designed knife that was used for cutting knots, cutting lines, untying knots and any number of day-to-day jobs aboard the ship. Also, the knife was used for preparing food or as a universal kitchen utensil.

Saving our forefathers ways starts with people like you and me actually relearning these skills and putting them to use to live better lives through good times and bad. Our answers on these lost skills comes straight from the source, from old forgotten classic books written by past generations, and from first hand witness accounts from the past few hundred years. Aside from a precious few who have gone out of their way to learn basic survival skills, most of us today would be utterly hopeless if we were plopped in the middle of a forest or jungle and suddenly forced to fend for ourselves using only the resources around us. To our ancient ancestors, we’d appear as helpless as babies. Just like our forefathers used to do, The Lost Ways Book teaches you how you can survive in the worst-case scenario with the minimum resources available. It comes as a step-by-step guide accompanied by pictures and teaches you how to use basic ingredients to make super-food for your loved ones.

That about sums it up. If you enjoyed the article and you have other ideas/comments, feel free to place your comment and share your experience.