For centuries mankind has endeavored to preserve meat. Seafarers, centuries ago, pickled meat in large wooden caskets and devoured this during the months they were at sea.

No wonder they suffered from scurvy!!

African folklore has it that migrating African tribesmen, herding their stock, would place strips of venison under the saddles on their horses as the chaffing would tender the meat and the sweat of the animals would spice it! This must be when vegetarians were born!!

BILTONG, as we know this delicacy today, is a rich inheritance from pioneering South African forefathers who sun dried meat… The history of biltong goes back to the Dutch Voortrekkers travelling from the Cape inland into South Africa. They needed food to sustain themselves and realized that the only way to preserve meat, was to hang it out to dry.
The basic spicing is a dramatic blend of vinegar, salt, sugar, coriander and other spices. These were in abundance in the Cape Colony, as the French Hugenots produced wine and vinegar from their grape crops and the colony was the halfway stop for seafarers plying the spice routes of the East. Throughout the ages many different marinades have been lovingly concocted for slices of beef or venison to draw their own brine for various periods of time, and then hung out to dry – with the proud creators each proclaiming the ultimate taste sensation in perfect Biltong!

The truth of the matter is that Biltong, as with any food, is subject to the verdict of personal taste, which varies from individual to individual. Some like it wet and fatty, others dry and lean; some prefer it well peppered with lots of coriander and other spices while others prefer it with a more delicate piquancy.

A big variety of meats can be used to produce biltong like beef , game meats, chicken, fish or even ostrich. First you have to cut out the fillets of meat.
The fillets must be cut into strips or flat pieces following the grain of the muscle. Biltong is similar to beef jerky in a certain way because both are cured-dried meats. The difference between biltong and beef jerky is that biltong is sliced after the drying process  not  before like the beef jerky. 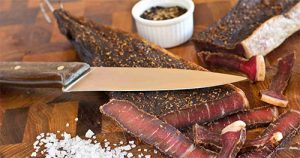 The modern day recipe may include:

The best way to prepare biltong is by marinating the meat in a vinegar solution (balsamic or cider vinegar work very well too) for a few hours. After soaking the meat must be drained of excess liquid. Meanwhile prepare the spice mixture that consists of equal amounts of :

Mix all the ingredients then ground roughly together. Sprinkle the mix all over the meat fillets and rub well to obtain an evenly distributed layer. After this process the meat must rest for a few hours or refrigerate overnight in order to absorb the flavors.

The next step is to pour off any excess of liquid. 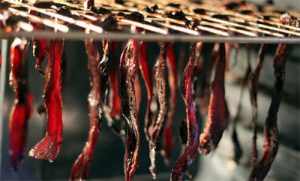 The drying process can be achieved in three ways:

In colder climates biltong can be dried with the help of an electric lamp but care must be taken to ventilate as mold can form on the meat spoiling it. A traditional slow dry will take 4 to 6 days but you can dry the biltong in an electric fan-assisted oven too. Set the oven to 100-160 degrees F and leave the door open in order to
eliminate the moist air. You’ll have the same result as the traditional drying after 4-5 hours. The point is to eliminate as much moisture as possible. A longer drying process will prolong the shelf life from 2 to 3-4 years. Biltong can be eaten as a snack, added to stews for the great taste, sandwiches or make biltong-flavored potato chips. Another great way to preserve the meat for long journeys, as our forefathers did on the Oregon Trail, is pemmican. You can find the recipe HERE with a step-by step guide and a great video tutorial.

Learn how to smoke your own meat based on long-term preservation techniques from our forefathers that will keep them fresh for long time periods… no matter the season.. Watch the video below and uncover more  secrets !

3 Replies to “BILTONG: The Ultimate SHTF Food For Preppers”