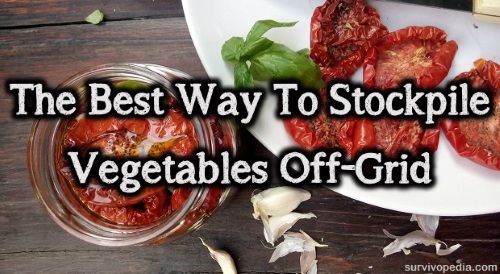 This is, of course, the easiest way to stockpile most vegetables but it does cost more in the long run that growing and preserving your own vegetables.

Though methods such as canning may have a hefty cost up front, you’re going to be able to re-use the jars so each season, your cost per jar just keeps going down. However, if you don’t have space to grow a garden, stockpiling store-bought canned foods is the best way for you to prepare. 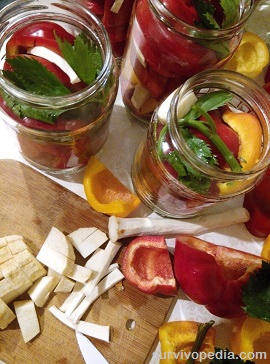 We’ve discussed canning vegetables in several other posts but there’s a reason for that: it’s effective as a means of storage and, when canned properly, vegetables will last for a decade or longer. I think that it bears repeating that you need to do this safely. Again, we’re assuming in this article that there is no power source.

That means that canning over an open fire (or in an enclosed fire pit) is going to be your only option. The single most important part of canning your vegetables this way is that you ensure that the water remains boiling the entire time.

This is because one of the primary reasons that you must boil your jars of vegetables for a set amount of time is to kill the bacteria that causes botulism. Botulism causes damage to your central nervous system and can quite realistically be fatal.

Vegetables that have a low acidity, which encompasses just about every vegetable except tomatoes (yes, I realize that tomatoes are technically a fruit), must be boiled at temperatures higher than most boiling water baths reach.

You need to use a pressure canner for most vegetables and all meats in order to kill the spores that cause botulism. Doing that over an open fire is certainly possible but you’re going to need a tremendous amount of fuel to do it. You can read more about that here.

Of course, if you’re operating with solar panels or other sources of off-grid power that enables you to cook inside, fuel won’t be an issue.

If you notice that your jar isn’t sealed, has bubbles inside before you open it, has foam on top when you do open it, or is under a lot of pressure when you open it (food may blow out), don’t eat it. These are all signs that the food is contaminated with the botulinum bacteria.

Dehydrating is a wonderful way to preserve vegetables. It preserves most of the nutrients in the foods and also 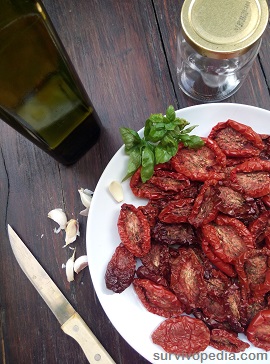 makes them lightweight and reduces the size by at least half.

It’s also simple to do even if you don’t have a dehydrator. For example, if you string peppers, green beans or peas (to name a few) on a string and hang them in the sunlight, they will dry perfectly well just like that over the course of several days or a couple of weeks.

All of you have likely heard of sun-dried tomatoes. The best way to dry your tomatoes in the sun is to cut them into quarter-inch strips or wedges and lightly salt them. Just set them out in the sun and let them dry out, turning occasionally to hasten the process. Onions could probably be dried like this too, but I’ve never tried it. If you have, tell us about it in the comments section.

The thing to remember about dehydrating is that it doesn’t preserve your food long-term. It simply preserves them a bit longer because it removes most of the water content. Since there’s still water in them, they’ll spoil eventually.

Many people counter this by canning the vegetables after dehydrating them. The main reason for doing this instead of just canning them is that you can get much more dehydrated food into a jar than you can hydrated foods.

Yes, you can smoke vegetables for long term storage, though you should probably can them afterwards just as you would dehydrated foods. You’ve probably heard ofsmoking meat; you’ve undoubtedly even eaten it!

The same process applies to vegetables. Cut the veggies in strips and put them in your smoker. Smoke them until they’re dried just as you would if you were dehydrating them. There are now indoor smokers but that would require electricity. Of course, if you want to get a head start, you could smoke them inside now and preserve them for later!

One of the biggest advantages to smoking your vegetables is that it adds tremendous flavor that adds a wonderful layer to soups, stews and other dishes that you may make.

Since seasonings may be at a premium if SHTF, this added flavor will be an advantage. There’s nothing that boosts morale more than well-flavored foods and smoking infuses such a unique taste that fond memories of barbeques and parties are sure to follow.

Herbs are best dried or fresh. The good thing about most herbs is that you can grow them in pots even indoors and 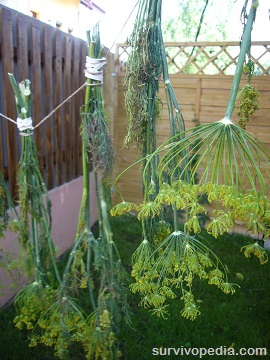 can just pinch some off as you need them. Most continue to grow and replenish and even if they don’t, herbs tend to grow quickly and are usable practically from the time that they sprout.

To dry your herbs, all you have to do is hang the plant upside down in the sun and let them wither and dry.

It’s easy and will preserve your herbs for months. The secret here is to make sure that they are completely dry.

You’ll know that they’ve reached that point when the leaves crumble when you roll them between your fingers.

If you don’t get them completely dry, they’ll mold and then all of your hard work will be wasted.

There are many different ways for you preserve your vegetables off grid. Experiment with each and see which one you like best. It’s probably a good idea to become proficient in each method now so that it won’t be a challenge for you if something does come to pass that causes you to live off grid.

Just be sure to do it properly because mold or bacteria can make you extremely ill and can even kill you. Become proficient now!

Living without power, cars, electronics or running water may seem like a nightmare scenario but to pioneers it was just the way life was. Having the skills to survive without modern conveniences is not only smart in case SHTF, it’s also great for the environment. Keep in mind that the key to a successful homestead does not only lie on being able to grow your own food but on other skills as well. Learning these skills will take time, patience and perseverance, and not all of these skills are applicable to certain situations. Hopefully, though, you managed to pick up some great ideas that will inspire you and get you started! Just like our forefathers used to do,  The Lost Ways Book teaches you how you can survive in the worst-case scenario with the minimum resources available. It comes as a step-by-step guide accompanied by pictures and teaches you the lost skills of our forefathers. Watch the video below:

If you have any more suggestions for preserving vegetables off grid, please share your knowledge with us in the comments section below.

5 Replies to “The Best Way To Stockpile Vegetables Off-Grid”