This article was written by Megan Stewart and originally published at SurvivalSullivan.com. 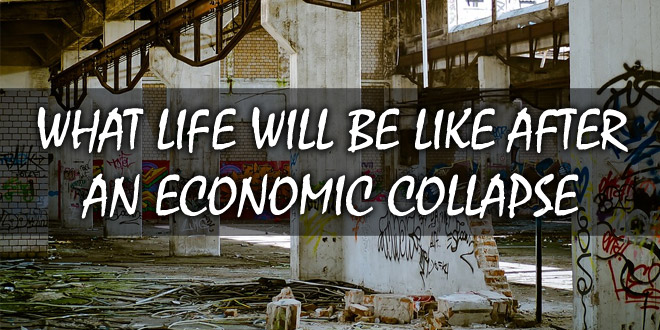 Editor’s Comment: We’ve reached the point where many people are starting to look around and get it. The economic collapse of 2008 wasn’t a fluctuation, a downtown of the cycle. It was a step down, a new normal for everyone to get used to. But acclimation has been difficult, and slow. People are still looking around for the familiar signs of stability, but something very important is missing.

The model has collapsed, and the net is closing in around everyone. The majority of people are experiencing difficulties making ends meet; many are becoming desperate, fed up and hopeless. What will the effect be a sustained, drawn out collapse? Everyone just left out to dry and be swept up into the collective.

These are the times when it would be wise to make rational, long term, cautious and conservative moves towards prepping for events where income loss, financial turbulence and unsteady people are all systemic risks. Building a supply of food, equipment, medical supplies and alternative energy are all important, and here’s how you can start to prepare for any disaster that may come your way.

What Life Will Be Like After an Economic Collapse

If you have been waiting for a public announcement or news headline to let you know that an economic collapse has begun, you are in for the surprise of your life. If history in other countries and in Detroit, Michigan is any indication, there won’t be an announcement. An economic collapse tends to sneak up on a city, region, or country gradually over time. In some cases, the arrival of an economic collapse is so gradual that most people living in it aren’t even aware of it at first.

Things just get gradually worse, often so gradually that people and families adjust as best they can until one day they actually realize that it’s not just their home or their neighborhood that has been hit so hard financially, it’s everyone. By that time, it’s often too late to take preventative action.

In March of 2011, Detroit’s population was reported as having fallen to 713,777, the lowest it had been in a century and a full 25% drop from 2000. In December 2011, the state announced its intention to formally review Detroit’s finances. In May of 2013, almost two years later, the city is deemed “clearly insolvent” and in July of 2013, the state representative filed a Chapter 9 bankruptcy petition for Motor City. Detroit became one of the biggest cities to file bankruptcy in history.

So we have only to look at what happened in Detroit, Michigan post-bankruptcy, to get an indication of what might soon be widespread across the United States and what is already widespread in countries like Brazil and Venezuela.

Grocery stores and other businesses will fail one by one or be shut down from the riots and looting. In Detroit, the economic collapse left less than 5 national grocery stores for over 700,000 people. Imagine the lines even if food was still being shipped in on trucks. Small independent corner stores and family owned stores become the most convenient place to shop. These are stores with already high prices who make most of their profit from beer, wine, lottery, and cigarettes.

One of the ways for you to prepare for an economic collapse and increase the likelihood that your family will be well-fed regardless of what is available in the grocery stores is to grow your own food. For further protection, consider planning and planting a hidden survival garden rather than a traditional garden that would be obvious to neighbors and looters. In addition, you can learn how to identify, harvest, and consume wild edible plants to supplement your food supply.

Public services, including the school system experience frequent strikes that shut them down for days at a time. Power issues and outages become more frequent and roadways become filled with potholes and other signs of disrepair as preventative measures are shoved aside. The water from the tap, that you pay for monthly, begins to smell funny, so you start filtering it before using it. Garbage collection service is sporadic and you begin to see increased trash along the streets and sidewalks.