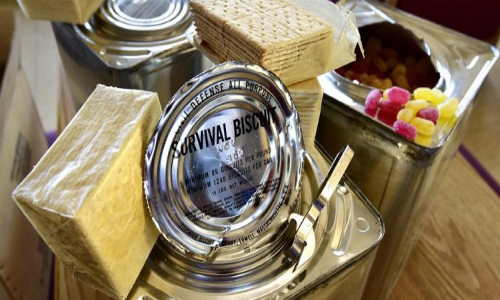 This article was originally published by Rich M on www.askaprepper.com

World War II ended in 1945. Two short years later we were involved in another conflict; one with the potential of being even more deadly… the Cold War.

While the United States and the Soviet Union were “allies” during WWII, it was always an uneasy alliance. Even so, supporting the Soviets made sense, as every German soldier they killed was one less that our military wouldn’t have to.

In the cold calculus of war, that also meant that every Soviet soldier who died was one less American soldier who would have to give up their life.

Defeating NAZI Germany propelled the Soviet Union onto the world stage, in a way that Russia never had been before. At the Yalta Conference, after the war, Russia successfully gained occupation of Eastern Europe, allowing them to unify the countries under their control and ultimately create the Warsaw Pact.

While the United States was busy reducing their military after the war, going back to peacetime levels, the Soviet Union never really did. Nor did they retire old equipment like we did. I distinctly remember briefings about Soviet forces, back when I was a captain in the Army.

One of the striking things to me, was that they still had World War II equipment on the books, including vehicles supplies by the USA as part of the “lend-lease” program.

The other major military move that the Soviet Union undertook was to pour resources into their own nuclear program, which started in February, 1943. The Soviet leadership had learned about the Manhattan Project, with spies implanted into the facility at Oak Ridge and sought to duplicate it.

Before the war even ended, Soviet intelligence services were working hard to bring German scientists into the fold, in order to boost their own nuclear program.

This led to the OSS (Office of Strategic Services) Operation Paperclip, bringing German scientists to the US for the same purpose, and to keep those scientists out of the hands of the Soviet Union.

Hence, the Cold War was begun. Which side could develop, build and field enough intercontinental ballistic missiles to defeat the other and protect their own population first?

That war lasted 44 years, without ever turning hot and without either side ever winning the victory. Rather, the Soviet Union fell apart on December 26,1991, effectively removing themselves from the contest.

The federal government not only put a lot of effort into building our nuclear arsenal, but also in (halfhearted) ways of protecting our civilian population.

The Office of Civil Defense (DCPA), an organization started during World War II, took over these efforts, building and identifying fallout shelters and training the population in what to do in the event of a nuclear attack.

Part of this was stocking those fallout shelters with food, water and sanitary supplies, for those who would be staying in the shelter.

I remember growing up in the Cold War. We had fallout shelter drills in the elementary school I attended, just like the schools have fire drills today.

Our fallout shelter was under a staircase and looking back on it, I wonder how they expected us to survive in those crowded conditions for 30 days.

I also remember the bomb shelter we had, attached to our home. I have no idea how old the shelter was or why it had been built in the first place; but it was an old house, perhaps dating all the way back to the Revolutionary War. 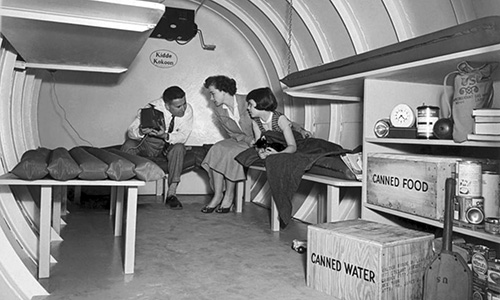 The bomb shelter was clearly an addition, many years later. Still, it was designated as our community fallout shelter and stocked with Civil Defense supplies.

A typical fallout shelter for 50 people (ours was less) would be stocked with the following kits: 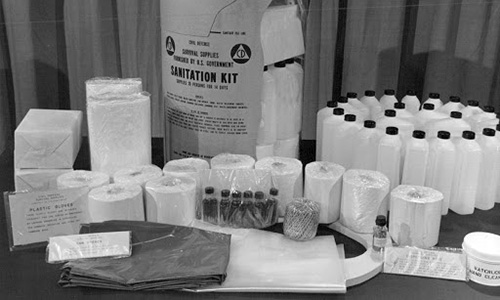 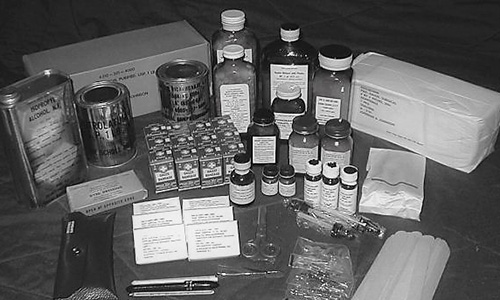 • 1 Radiation detection kit (ours was too small to have this) 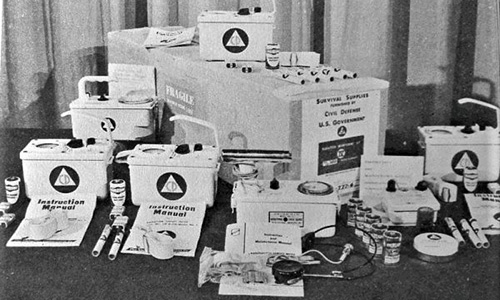 Were any prepper you or I knew to have this as their stockpile, we’d look at them and shake our heads, calling them a “newbie” or worse. Were anyone to try and survive on what’s included in this kit, they could.

But it would literally just be survive, as in just barely survive. The only parts of the kit which are at all impressive are the medical kit and the radiation detection kit.

So, what would happen if we tried eating that food and surviving on that water in a survival situation today? That’s assuming you just happened to find a shelter with those supplies still stockpiled, but let’s assume that for the sake of discussion.

The water in these Civil Defense supplies was packed in 17.5 gallon steel drums. Some earlier versions used a fiberboard drum, rather than the metal one; but the changeover happened quickly, leading me to think that the fiberboard ones weren’t very good. 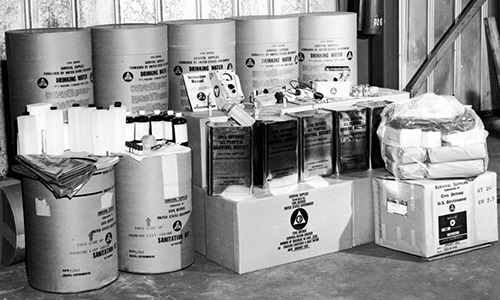 The water itself was encased in a double polyethylene bag; the inner of which was either tied shut with a wire tie or heat sealed. 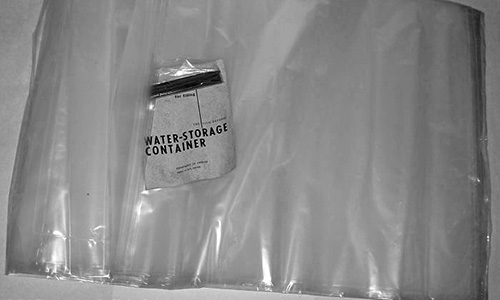 Each drum supposedly provided water for 5 people, for two weeks. Dividing that out, we get one quart of water, per person, per day, assuming that there aren’t any extra people in the shelter; not something to be counted on.

While it would be possible to survive on a quart of drinking water per day; that would leave people weak, dizzy, and with some confusion. Left too long, it can lead to some severe medical conditions, including permanent kidney damage. It’s not something to be taken lightly. Still, that’s better than dying of radiation poisoning.

Forgotten Recipes That We Lost To History

The other interesting thing about the water was that it was ordinary tap water. Pictures exist today of men filling those drums with water, using an ordinary garden hose, in the basement of government buildings where they were stored.

Those men were merely following the instructions printed on the drum. No chemical purification was added. 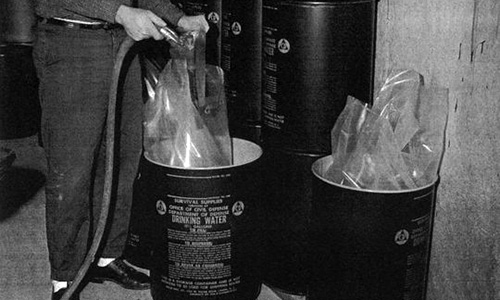 But would it stay that way over a prolonged period of storage? Instead of saving people’s lives, that water could have killed people, by bringing on dysentery and the dehydration that comes along with it.

Most preppers today would be shocked at what the Office of Civil Defense decided should be stocked as survival food. Those rations would make even the worst of modern prepackaged survival food look like gourmet meals.

There were three different types of survival food stored in those fallout shelters, which would give the inhabitants 700 calories of carbohydrates per day; no more.

The three types of food were randomly stocked in cases, each case containing only one of the following: 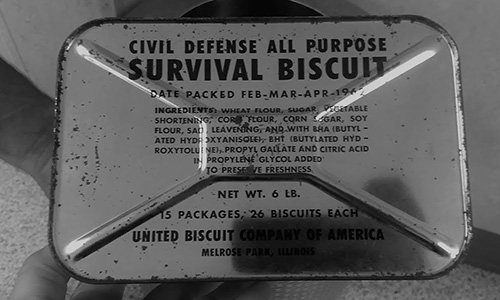 Putting that simply, a day’s ration in the fallout shelter would consist of roughly the equivalent of 12 graham crackers per person, along with a few hard candies, assuming the candies were available.

Since the boxes were randomly stocked, there was no guarantee that all shelters had hard candy. 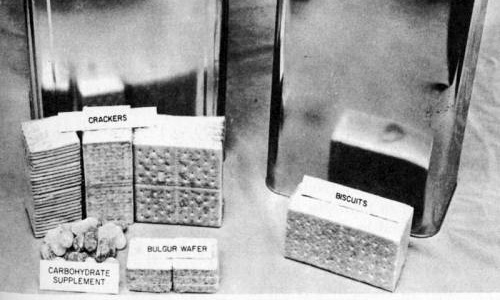 Such a diet would keep you alive, but you could count on losing about a pound per day, even with the sedentary activity of being trapped underground, along with 49 other people.

Since it would only be for two weeks, it is unlikely that such a diet would cause any serious problems, except for people who already had underlying medical issues.

But what if you found one of these cases today? Could you just add it to your prepping stockpile as extra carbohydrates?

While you probably could, it would not be recommended. Most of this food was put in place in the early 1960s. But efforts to replace those stocks were curtailed in 1969, when Congress decided to stop appropriate funding for shelter supplies.

In 1976 laboratory tests led DCPA to publish the determination that the majority of the food stored in those kits was likely to have become rancid. Their recommendation was to destroy those stocks of food, leaving the shelters without any food stocks at all.

What happened to the biscuits, crackers and bulgar wafers? Those which were considered to be in “good condition” were mixed into animal feed and fed to livestock.

But any which was in rusted or otherwise damaged containers was destroyed; or more likely hauled off to the local landfill.

So, what would happen if we were to eat it anyway, even if it was rancid?

Eating rancid cereal products like these causes irritation to the stomach and intestinal tract, causing vomiting and/or diarrhea. Once again, we’re faced with the issue of death by dehydration, as both vomiting and diarrhea take water out of the body.

While that might not sound all that bad, severe dehydration leads to death. This can happen though bacteria and amoebas in the food, but it can also happen with rancid food.

The bottom line is that it wouldn’t be a good idea to eat Civil Defense food stocks, even if you could find them. While you might survive such a situation; it would clearly be unpleasant.

But there’s a chance that it could go farther than that, especially in a survival situation, leading to your death by dehydration.

One Reply to “What Happens If You Eat Food From The Civil Defense Emergency Kit?”