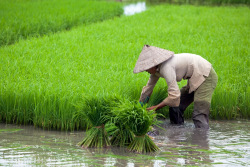 Whenever you eat rice, a prevalent but poisonous element is all over your meal like, well, white on rice.

The U.S. Food & Drug Administration tested 1,300 samples of rice and rice-based products and found that they all contained very low levels of arsenic [PDF].

Grains of rice tested had average levels of inorganic arsenic ranging from 2.6 to 7.2 micrograms per serve. Tragically, instant rice contained the least amount of arsenic and brown rice had the most. Products containing rice ingredients also contained arsenic.

That isn’t much arsenic — a microgram is one-millionth of a gram, and there are 28 grams in an ounce. But is it dangerous?

In the short term, the FDA says no. “These amounts of detectable arsenic are not high enough to cause any immediate or short-term adverse health effects,” the agency wrote on its website. In the long run? Nobody’s really sure. “The FDA intends to conduct a risk assessment considering how much arsenic is consumed from rice and rice products, and whether there are variations in health effects for certain segments of the population.”

Can you get your rice without arsenic? Apparently not. From The Christian Science Monitor:

FDA toxicologist Suzanne C. Fitzpatrick said that because arsenic is naturally occurring it is going to be in food, and because rice is grown in water it will always have higher levels.

“It’s not something that we can just pull off the market,” she said.

The rice industry said Friday that it is working with the FDA and is encouraged by the results of the study. The industry has been conducting several of its own studies to try to figure out how to reduce arsenic levels, including investigating different ways to manage the water in which rice is grown and looking at processing and rinsing methods to see if there are ways to reduce arsenic levels.

Meanwhile, the FDA suggests that you balance a mix of grains and other foods in your diet to help water down any risks.