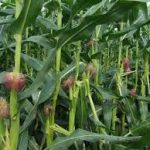 As many predicted, the wholesale adoption of genetically modified crops on American farms led to hardy plant pests that rapidly adopted and developed resistance. Now the claim that GMOs reduce pesticide use — a main selling point — should be abandoned by the pesticide industry that is gobbling up dramatic sales growth.

Bt seeds, genetically engineered to produce toxins on their own to combat pests that attack plant roots, may still be touted by Monsanto as a path to “sustainable” agriculture, but sales figures from major soil insecticide manufacturers show a different story.  The promise of an agricultural biotechnology “miracle” now seems like an empty platitude and nothing but a path back to more chemically-intensive system of production.

As we previously reported, the U.S. Environmental Protection Agency, in a highly critical 2011 report, identified the growing failure of Monsanto’s Bt corn to prevent rootworm damage. At the time, the EPA found that at least four states, Iowa, Illinois, Minnesota, and Nebraska were seeing “severe efficacy issues” in Monsanto’s corn. Monsanto vocally denied the resistance problem.

Now as the rootworm resistance to Bt corn seeds continues to expand across the entire Corn belt and as awareness of the problem increases, more and more farmers spray the soil in order to kill resistant pests. Seeing opportunity, pesticide companies have actively embraced the resistance issue by recommending soil insecticide applications.

“There is a degree of irony in such recommendations, given that the purpose of [Bt] corn was to eliminate the need for corn soil insecticides,” noted Charles Benbrook, a Washington State University scientist, in reviewing impacts of genetically engineered crops on pesticide use over the first sixteen years.

While the U. S. Department of Agriculture has stopped tracking the use of pesticides long ago, as Congress bowed to the demands of the agro-chemical industry, the growing usage of insecticides can be gleaned from sales figures of the top four U.S. insecticide sellers.

Syngenta AG, the top world-wide pesticide maker based in Switzerland, reported in its 2012 annual results that while the overall North American sales of its insecticides grew 10%, the sales of soil-based insecticide that specifically targets the Corn Belt rootworms and other ground insects more than doubled being driven by “grower awareness of corn rootworm resistance.”

FMC Corp., a giant industrial and agricultural chemicals company and one of the global leaders in the chemical crop protection market, also saw strong sales results in 2012 as overall North American sales of its crop chemicals jumped by 30%. It reported particularly strong demand for insecticides that constituted 50% of all crop chemicals that the company sold.

Dow Agrosciences, another major soil insecticide player, also posted record-breaking sales in 2012 due to strong product demand with crop protection sales overall up 19% for the year. However, the company did not break down it annual sales figures any further.

The rampant sales of soil insecticides demonstrate that farmers no longer rely on Monsanto’s Bt corn to stop rootworm infestations on its own. Monsanto’s Bt corn makes up about two thirds of all corn planted according to USDA statistics. Damage from resistant pests has become a major problem and soil insecticides are the protection policy against unexpected infestations that farmers turn to.

This toxic insurance against resistant pests comes at a very high price as insecticides kill beneficial insects and endanger the health of farm workers. The old environmentally-hazardous toxins that are now necessary for agricultural production may be dooming prospects for sustainable agriculture and the full scope of the problem is yet to emerge.

Mother Nature is striking back against genetically engineered fields everywhere, not just against Bt corn fields.  Cotton, another major Bt crop, is plagued by rapidly evolving resistance of the bollworm population in the U.S. and around the world.  The glyphosate-resistant corn and other industrial crops are also facing invasions of hard-to-kill “superweeds.”  What environmental scientists call “pesticide treadmill” — a form of chemical warfare fought against evolving nature in our fields — is accelerating.

Yet, as we look back at the broken promise of GMOs, it’s apparent that the resistance problem could have been much smaller, if not entirely avoided, had the industry been honest about addressing the pitfalls of biotechnology. The 2011 EPA report, for example, strongly criticized Monsanto’s inadequate resistance monitoring. Numerous scientific panels and reports recommended strict buffer and refuge zones for genetically engineered crops that were rejected by the EPA in favor of Monsanto’s loose recommendations.

Is it too late?