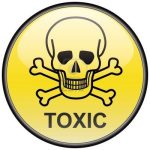 Researchers at the University of California, Davis recently carried out the first-ever study to consider dietary exposure to 11 toxins simultaneously, including acrylamide, arsenic, lead, mercury, dioxins and several banned pesticides (chlordane, DDE, dieldrin). The study’s participants included 364 children aged two to seven, 446 parents of young children, and 149 older adults, all living in California. To assess exposure levels, researchers used food-frequency questionnaires along with toxin content datasets from the Environmental Protection Agency. Exposure levels were then compared with the “cancer benchmark” of each toxin, which is the exposure level that would generate one excess cancer per million people over a 70-year lifetime. Non-cancer benchmark levels were also considered, for health effects other than cancer.

Health effects of the most prevalent toxins

Arsenic has been linked to liver, lung, kidney, and bladder cancers. Dieldrin is a banned insecticide suspected to cause cancer, Parkinson’s disease and low birth weight. DDE is a metabolite of the banned pesticide DDT, and is known to damages cells’ genetic material. Chlordane is also a banned pesticide and has been linked to cancer, neurotoxicity and low birth weight. All of these toxins, and especially dioxins, are also suspected endocrine disruptors and may therefore also disturb the development of the children’s immune, nervous and reproductive systems.

Top five food sources of each toxin for preschoolers

As a helpful guide, the researchers identified the top five food items responsible for exposure of preschoolers to each toxin:

Based on their findings, the researchers in this study made several dietary recommendations for reducing exposure to the main toxins in the general population as follows:

It’s rare that the authors of a peer-reviewed journal article publicly recommend a switch to organic foods, but that’s exactly what these researchers have done. Far from being just for snobs, organic products now appear to be a necessity for anyone wanting to protect themselves and their children from potentially dangerous levels of multiple toxins which now pervade our environment and food supply.