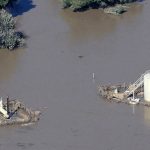 More than 5,250 gallons of crude oil have spilled into a river in Colorado, contaminating much of the same region that was ravaged days earlier by a monumental flood that left no fewer than eight residents dead.

The Denver Post reported on Wednesday evening that the Colorado  Department of Natural Resources was alerted of the spill that  afternoon by Anadarko Petroleum, a Texas-based oil and gas  exploration company.

“To date, we are aware of two tank batteries that were damaged  by flood waters, and have associated light-oil releases,”   Anadarko acknowledged in a press release.

The crude reportedly emptied out of damaged tanks south of the  town of Milliken where theSt. Vrain and South Platte Rivers meet  near Boulder, the county’s most populous city with almost 100,000  residents.

Todd Hartman, a spokesperson for the Colorado DNR, told the Post  that state authorities are unsure of when the Anadarko spill  happened, and stressed that it was only the first incident that  was confirmed to his office after reports of widespread damage  following last week’s floods.

“You have operations that are entirely underwater,”  Hartman explained to National Geographic this week.

Days before Anadarko alerted officials of the spill, Hartman’s  office issued a statement warning residents that “many  contaminants, such as raw sewage, as well as potential releases  of chemicals from homes, businesses and industry, may be  contained in the floodwaters” that displaced hundreds of  people and cost upwards of $2 billion in property damages,  according to some early estimates.

Already, though, other companies are confirming that flood waters  have damaged their tanks and wells, leaking other contaminants  from its containers into the already ravaged region. 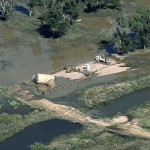 Representatives with another large natural resource company,  Noble Energy Inc., said late Wednesday that they have also  alerted the Colorado Oil and Gas Conservation Commission that one  of its wells “appears to be releasing a limited amount of  natural gas.”

The Post reported that multiple state and federal offices have  been alerted of the Anadarko spill, including the United States  Environmental Protection Agency and the Colorado Department of  Public Health and Environment. By Thursday morning, the paper was  reporting that industry crews and state officials had already  reached the scene near Milliken and had placed absorbent booms in  an attempt to begin a clean-up mission.

Practically 1,900 oil and gas wells in the region were already  shut down as a precaution due to high waters, and the Colorado  Oil and Gas Association said crews totaling roughly 600 industry  personnel are inspecting and repairing sites, conducting aerial  and ground surveillance and identifying and determining locations  of possible impairments.

In all, the region of Colorado impacted by the storm contains  around 19,000 active wells, CBS News reported this week.

Anadarko and Noble have each shut-down around 10 percent of their  respective operations, and another company — Encana Oil & Gas   — shuttered hundreds of its 1,241 area wells when the section of  the start started to go under water last week. Andarko has also  closed down around 20 miles of pipeline, the Post reported.

“This State of Colorado and the US Environmental Protection  Agency must force Anadarko to clean it up — no matter the cost  — and make reparations to the public, including paying fines and  enforcing the Clean Water Act which may include civil and  criminal penalties,” Gary Wockner of Clean Water Action said  in a statement on Wednesday.