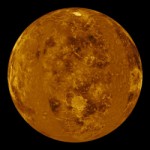 Assuming life on Earth survives humanity’s fossil-fuel binge (it probably will), it will nonetheless inevitably be doomed by climate change of even-more-epic proportions. We’re talking about stellar warming.

Life is only possible on planets that orbit stars inside a particular band of space that enables things like moderate temps, liquid water, etc. Earth currently sits within our sun’s habitable zone, but that won’t be the case forever: As the sun ages and grows hotter, its so-called habitable zone creeps outward by about a yard every year.

Research published in the journal Astrobiology projects that Earth could slip out of the sun’s habitable zone somewhere between 2 and 3 billion years from now. Earth’s water will evaporate, leaving The Rock Formerly Known As The Blue Planet as sterile as Venus. Nature explains:

The luminosity of a typical star increases as its composition and chemical reactions evolve over billions of years, pushing the habitable zone outward. Researchers reported in March that Earth is closer to the inner edge of the Sun’s habitable zone than previously thought.

The inner edge of the Sun’s habitable zone is moving outwards at a rate of about 1 metre per year. The latest model predicts a total habitable zone lifetime for Earth of 6.3 billion–7.8 billion years, suggesting that life on the planet is already about 70% of the way through its run.

All we need to do now is tackle the global warming problem and make sure that life stays habitable for humans for as many of those billions of years as possible. And if we manage to do that? One of the scientists involved with the study thinks we should book it for the next planet over.

“If we are still around, and the optimist in me likes to think we would be, I hope we’d be away from the Earth, perhaps on Mars, or spread out in a huge galactic family across the Milky Way,” University of East Anglia’s Andrew Rushby told The Guardian.

One Reply to “Stellar warming will turn Earth into Venus (eventually)”