The U.S. economy is on the cusp of a major collapse. When this happens, the government will be unable to do anything to stem it unlike previously when it bought time by pumping silly money through the use of Quantitative Easing and thus expanding money supply without having any real value attached to it. 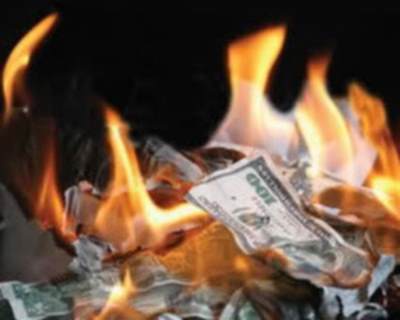 This time around, the government will not be able to save the banks and corporations because the government itself is bankrupt although the money used to prop up the economy via QE in recent years was borrowed money which will have to be paid down through higher taxes and inflation in the future as I cannot envisage an outright debt default.

The money supply expansion has done nothing for the wider economy and has only pacified Wall Street for a while.

Consumer spending is flagging because many are in debt they cannot afford to pay owing to the easy money over the previous years. House prices are stil dropping and if it were not for the government coming to the rescue of the banks, they would have fallen off a cliff much earlier on. Manufacturing and exports are stagnant and many of these private sector jobs have been wiped out by the public sector.

Public sector jobs do not grow economies, they only serve to create more debt for the over indebted government.

A major reason for the present worldwide economic malaise is because the policy makers kept interest rates too low for too long. This encouraged borrowers and destroyed savers in the process.

With the huge stock of repossessed properties the banks hold, once the property

market truly collapses, the banks themselves will be wiped out so attempts to prop up the housing market will continue until the very end which is close at hand.

The government wants to be seen as proactive in dealing with the economic crisis it faces so it creates laws and reforms to appease the general public who for the most part, are totally oblivious of what is really going on.

The federal government spends 50% more than it collects in revenue with no end in sight to the escalation of the national debt which keeps growing exponentially.

China is busy buying up resources and doing pretty much what it wants with the tacit approval of the US because China are the major bankrollers of the US government. Their currency is still manipulated which makes most other producers completely uncompetitive which is hindering recovery in all other economic hit markets.

As my Brighton accountant mentioned to me the other day, “it’s like watching a slow motion car crash”, except the crash will happen but the only thing governments can do is to try to make the impact less traumatic.

It seems not a year goes by without another round of QE being introduced although all previous attempts did nothing to change the path of the crisis.

As a response to the remark made by my accountant and all the QE and bailouts we’ve seen to date, I offered the famous quote by Albert Einstein which I feel is the most apt explanation for those in the seat of power.

Insanity: Doing the same thing over and over again and expecting different results.