I don’t think the average person realizes how much they utilize milk and dairy products.  If you don’t own a milk cow or goat, in an emergency/crisis event, you might quickly wish you had access to some sort of milk.  Luckily, there are options for our food storage!

Milk is something that most families consume in generous amounts. However, when it comes to storing it, most of us realize pretty quickly that fresh milk won’t last more than a couple of weeks at most. As a result, milk is often an item that is frequently omitted from a family’s emergency food storage. But why should we let a short shelf life prevent us from storing an American food staple? Something that is not only delicious and versatile but that also contains healthy vitamins and minerals such as large amounts of calcium? Here are some alternatives to help you to complete your food storage in the best way. 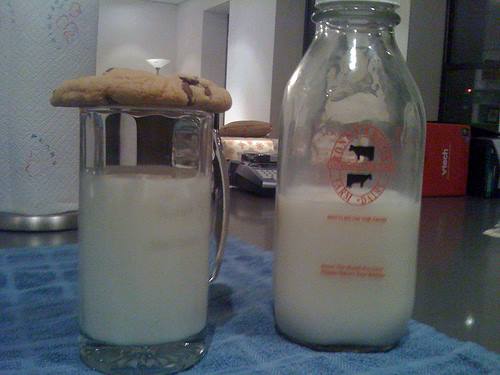 If you cannot stand the thought of having a non-cow’s milk in your food storage, you can actually lengthen its shelf life by freezing it. This will allow you to keep it for up to three months, so you will have to rotate your supplies every quarter. You might also want to try freezing just one carton first to test it out. The consistency can change slightly upon thawing, and it is not to everybody’s taste. If you like it, you can then work on filling up your supplies.

Powdered milk is probably the best milk for food storage. Not only is it as close to real milk as you will get, especially in taste and texture, but it is cheap and much easier to store taking up very little space. The regular shelf life for powdered milk is about 18 months, but if it is packaged properly, it will be good for much longer than that. It also doesn’t need to be refrigerated, which helps with storage. Instant milk is also an option. It is almost the same as powdered milk, but is created through a freeze-drying process.

Whether you have an allergy to lactose or dairy, you want an easier storage option, or perhaps you simply like the taste, soy milk is a popular alternative. The good thing about soy milk is that you can actually produce it at home. This makes it a good last resort for emergencies. Nutritionally, it has almost as much protein, less fat, and no cholesterol, when compared to regular milk. There is a different taste, so it is another one that you will want to try out first. Soybeans have a shelf life of about 18 months.

Rice milk is a bit harder to come by than soy milk, but some people prefer the flavor. It is another milk that can be homemade and is free of cholesterol and lactose. It does contain more carbohydrates than regular milk however. Rice milk also has a thinner consistency than dairy or soymilk. It has about a nine-month shelf life.

Thanks to a creamy consistency and added flavor, almond milk is a popular milk alternative. It is also something that you can make yourself, tastes good in drinks or with fruit, and has an average shelf life of about a year.

More about  how to grow your own food on Backyard Liberty

This article first appeared on Ed That Matters.

About the Author: Lee Flynn is from the Wasatch Mountains near Salt Lake City, UT. After Lee spent years preparing himself, his home and his family, he decided he had to do more. In his free time, Lee helps educate those who want to do the same. Through small local workshops and articles, Lee trains and teaches others on home preparation, food storage techniques, wilderness survival and self reliance. After obtaining a bachelors degree from the University of Utah, Lee moved to the Salt Lake Valley where he now lives with his wife and daughter.