Rise of the Warrior Cop

Regardless of how people feel about Nevada rancher Cliven Bundy’s standoff with the federal Bureau of Land Management over his cattle’s grazing rights, a lot of Americans were surprised to see TV images of an armed-to-the-teeth paramilitary wing of the BLM deployed around Bundy’s ranch. 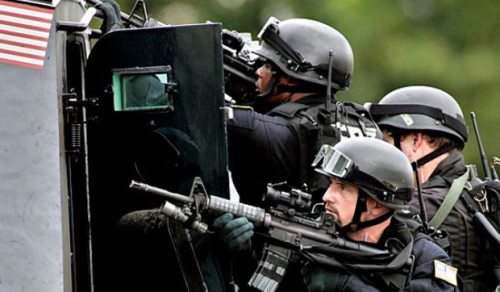 They shouldn’t have been. Dozens of federal agencies now have Special Weapons and Tactics (SWAT) teams to further an expanding definition of their missions. It’s not controversial that the Secret Service and the Bureau of Prisons have them. But what about the Department of Agriculture, the Railroad Retirement Board, the Tennessee Valley Authority, the Office of Personnel Management, the Consumer Product Safety Commission, and the U.S. Fish and Wildlife Service? All of these have their own SWAT units and are part of a worrying trend towards the militarization of federal agencies — not to mention local police forces.

The war on drugs and, more recently, post-9/11 anti-terrorism efforts have created a new figure on the U.S. scene: the warrior cop — armed to the teeth, ready to deal harshly with targeted wrongdoers, and a growing threat to familiar American liberties.”

The proliferation of paramilitary federal SWAT teams inevitably brings abuses that have nothing to do with either drugs or terrorism. Many of the raids they conduct are against harmless, often innocent, Americans who typically are accused of non-violent civil or administrative violations.

Take the case of Kenneth Wright of Stockton, Calif., who was “visited” by a SWAT team from the U.S. Department of Education in June 2011. Agents battered down the door of his home at 6 a.m., dragged him outside in his boxer shorts, and handcuffed him as they put his three children (ages 3, 7, and 11) in a police car for two hours while they searched his home. The raid was allegedly intended to uncover information on Wright’s estranged wife, Michelle, who hadn’t been living with him and was suspected of college financial-aid fraud.

The year before the raid on Wright, a SWAT team from the Food and Drug Administration raided the farm of Dan Allgyer of Lancaster, Pa. His crime was shipping unpasteurized milk across state lines to a cooperative of young women with children in Washington, D.C., called Grass Fed on the Hill. Raw milk can be sold in Pennsylvania, but it is illegal to transport it across state lines. The raid forced Allgyer to close down his business.

Brian Walsh, a senior legal analyst with the Heritage Foundation, says it is inexplicable why so many federal agencies need to be battle-ready: “If these agencies occasionally have a legitimate need for force to execute a warrant, they should be required to call a real law-enforcement agency, one that has a better sense of perspective. The FBI, for example, can draw upon its vast experience to determine whether there is an actual need for a dozen SWAT agents.”

Since 9/11, the feds have issued a plethora of homeland-security grants that encourage local police departments to buy surplus military hardware and form their own SWAT units. By 2005, at least 80 percent of towns with a population between 25,000 and 50,000 people had their own SWAT team. The number of raids conducted by local police SWAT teams has gone from 3,000 a year in the 1980s to over 50,000 a year today.