The sun has kicked into high gear and produced four so-called X-class solar flares lately from a solar spot that is expected to come more into alignment with Earth as the sun’s activity peaks this year and next.

The intense solar storms are expected to last as long as until 2020. 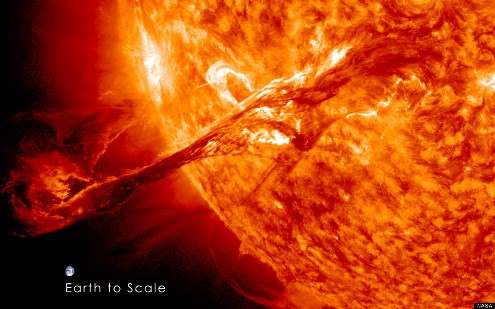 Until now, the sun has remained relatively dormant, but with four X-class eruptions in one week, it is beginning to reach its “solar storm maximum” in this latest 11-year cycle of activity.

Scientists of the National Aeronautics and Space Administration and the Solar Dynamics Observatory say that the latest eruptions are the first X-class flares that the sun has produced in this cycle.

The numbers assigned to the flares correlate to their strength. An X2, for example, is twice as intense as an X1, while an X3 is three times as intense.

The sun is going through Solar Cycle 24, which began in January 2008. So far during Solar Cycle 24 there have been 19 X-class solar flares, scientists say.

Read the documentation that’s sparking the worry about the EMP threat, in “A Nation Forsaken”.

Along with the radiation from the flares, there also is a coronal mass ejection, or CME. During a CME, billions of tons of highly charged particles are ejected to interact with Earth’s magnetic field, causing radio blackouts and the shutdown or destruction of vulnerable electrical grid systems and sensitive electronic components.

The initial X-class flares came from the same active sunspot region, which scientists identify as AR-1748. They say it was away from the Earth, although it is possible that their effects could “just glance the Earth’s magnetic field.” As it was, it caused some radio blackout, scientists said.

While the flares spewing from this sunspot went off into space, the AR-1748 is rotating more in alignment with Earth, scientists say.

Scientists said that an increased number of solar flares are expected as the sun approaches its peak of high activity. The Space Weather Prediction Center said that upcoming solar activity is expected to be moderate, with a 50 percent probability of more X-class flares erupting in the weeks ahead.

Because the United States and other Western countries are technologically based societies, with critical infrastructures run by electronics, the increase in space weather activity takes on a high level of importance.

For one thing, the U.S. national grid system is vulnerable in its own right.

But with an electromagnetic pulse, or EMP, generated from the sun’s flares – some of which can be up to 10 times the size of the Earth – the unprotected grid, including transformers, electrical components and automated control systems that everyone takes for granted in their everyday lives, could either be severely damaged or fried, taking months if not years to replace.

NASA estimates that a direct hit to Earth from one of these enormous flares would have a catastrophic impact on the nation’s critical infrastructures over a very wide geographical area.

In the first year alone, NASA estimates, such a disaster could cost just the U.S. upwards of $2 trillion. It also would take from four to 10 years to recover – if that even would be possible – and affect the lives of some 160 million people, threatening starvation and death.

Some EMP experts say that such a catastrophic event could  wipe out America’s urban centers, due to their total dependency on critical infrastructures for electricity, communications, food and water delivery, oil and gas, transportation, automated banking and financial institutions and even emergency services.

The experts say grocery stores, for example, would have their shelves cleared in a matter of hours due to the panic that would sweep the population. Normally, grocery stores carry a maximum of three days of products before being restocked. However, restocking would come to a halt due to the inability of trucks to function, with fueling stations unable to pump the fuel needed to run the vehicles.

Automated control devices that regulate the flow of oil and natural gas through the hundreds of thousands of miles of pipelines that crisscross the nation would be tripped, causing geographically widespread secondary fires and explosions.

Such an event would not just occur out in a remote field. Fires and explosions also could occur under streets and even into people’s houses.

The inability of fire and medical emergency services to respond would result in further disastrous consequences for the population.

Because automated systems ensure fresh water delivery, all filtering and sewage systems in the urban setting would face the high prospect shutting down, leading to disease such as cholera and dysentery. In addition, there would be little likelihood of medical attention because the hospitals and first responders’ emergency equipment which rely on electronics and communications equipment may no longer function.

Hospitals would have backup generators. However, if the generators have electrical starters, they might not function at all. Others may run on gasoline or diesel and only function for as long as there is fuel, which would need to be trucked in by vehicles with automated starters.

NASA estimates that as many as 350 of the large, customized transformers, which maintain a power supply across the nation and are only produced abroad, would be destroyed.

Because they are expensive – some costing as much as $20 million a copy – utilities don’t keep spares on hand. They could take years to replace, especially if a number of technologically dependent countries’ transformers are affected by a direct solar flare impact.