Preppers and Ebola: Protecting Yourself

The current Ebola outbreak is the largest in history. It has caused more than 672 deaths and more than 1,200 infections in Guinea, Liberia and Sierra Leone, this according to the Centers for Disease Control and Prevention (CDC). 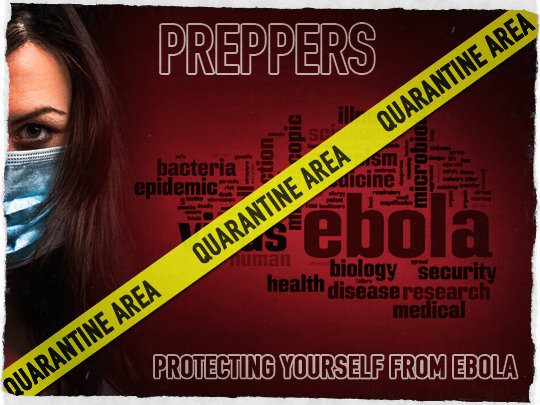 To control the disease the chain of transmissions must be broken. While highly contagious the disease can be isolated, because you cannot become infected by simply breathing the virus in, it is not airborne, in other words. You have to have contact with an infected person’s bodily fluid, blood, feces, mucus, semen and even sweat.

The mortality rates are high but keep in mind the medical facilities where the patients are now being treated are not as advanced, as they would be in the United States. If people became infected in the U.S. and received prompt medical treatment the mortality rate would likely drop to 50 percent or possibly lower. This is all speculation of course, because there has never been a reported case of one of the four deadly Ebola viruses in the United States.

It is assumed that the medical professionals across the country have plans, and are ready to deal with the problem if it becomes a problem in the United States. However, this again is all speculation.

Experts and others claim the disease is just an airplane ride away from being in the United States and most claim it is not in the U.S. yet. Assume it is here however, because to assume otherwise, you would then not take the proper precautions when caring for someone with a high fever, who is vomiting and has severe stomach pains. These are just a few of the symptoms, and keep in mind influenza for example, may have the same symptoms to a certain extent, (refer to a previous article on Ebola symptoms and treatments).

You as an individual should never treat anyone including family members, that you know or suspect has the virus without proper protection. Protection includes medical gloves, gowns, facemasks, shields and protective eyewear.

First responders have to be particularly cautious when treating any victim for any reason, because a person can be a carrier and not show any symptoms. It is important that a travel history be obtained if possible. You must know where family members have traveled too. Even if they have not traveled to Africa, for example, interconnecting flights may have had an infected person on it.

Medical experts claim that a person is not contagious or as contagious until the symptoms are full blown, but there is not a vaccine, which should tell you that the medical experts do not fully understand the virus, so never assume anything.

Wear two pairs of protective gloves when handling needles. You should never reuse needles, but if you find you have to, the procedure for sterilization is to submerse the needles in hot soapy water to remove any obvious contaminates, such as blood mucus and so on. Once the needles have been cleansed of all blood or other fluids rinse well with clean water in a sterilized bowl or other container. Once rinsed draw undiluted chlorine bleach into the needles and let soak for 30 seconds. Expel the bleach safely, repeat the process, and let the needles air dry. This assumes the sodium hypochlorite (liquid chlorine) content is at least between 5.25 and 6 percent or higher.

Elimination of All Microorganisms, Viral, Bacteria, and Fungal Through Sterilization

Sterilization of hard, non-porous items can be accomplished by using high heat, an autoclave or steam sterilizer. Boiling heat-resilient items in water for 20 minutes will kill the Ebola virus as well. You can also use a bleach solution to kill the virus on hard surfaces, clothing and other items using a solution of 1:10 and a solution of 1:100.

A 1:100 bleach solution is used to disinfect:

A 1:10 bleach solution is a strong solution used to disinfect excreta and bodies, and it is best this is left to medical professionals (CDC, 2014).

Washing your hands is always the first line of defense to protect yourself and others. Use bar soap that has been cut into chunks so you can use one piece and dispose of that piece. This prevents contamination of the entire bar of soap.

Use one hand to scrub the hand, forearm of the opposite hand, and then switch using the other hand and then rinse well. Discard the piece of soap safely and always use a disposable one-time use towel or let the hands air dry.

You cannot “catch” the virus by simply being in the same room with an infected person. However, you have to assume that if an infected person sneezes or coughs then micro mucus droplets can be transmitted through the air for short distances. If it is known or suspected a person has the disease use all available protection whenever in the same room.

Bedding must be destroyed by incineration or proper procedures followed for sterilization and the same applies to the patients clothing. Physical barriers must be erected to isolate patients. This would include protective fencing, to prevent people from entering, or heavy sheets placed over doorways to alert others that a person is isolated. Signs alerting others should be placed were easily seen as well.

Bathrooms used by the infected person must be isolated and not used by anyone else. Never enter a bathroom facility that an infected person has used without all protective clothing/gear in place.

The best protection for individuals is of course isolation. Avoid crowds, do not fly and stay out of airport terminals. Once again, the virus is not floating in the air, so if you have not come in physical contact with an animal or a human that has the disease then you cannot catch the virus.

It is likely but not proven that the virus is in the United States. Remember the mortality rate is directly related to the treatment of patients infected. Because there is no cure, treatment is therapeutic. Hydration levels must be maintained, blood pressure monitored closely and most patients have to be treated for secondary infections caused by the virus.

Excessive internal and external bleeding is common and a common cause of death from the virus. This must be treated promptly by professionals. Do not attempt to treat anyone at home that you suspect has the virus.

The information provided is for informational purposes only and is not to be considered medical advice.

One Reply to “Preppers: Protecting Yourself From Ebola”