There are quite a few misconceptions about EMP’s and what exactly we need to do to prepare for an event like this. This is also an area of preparedness that most of us are lacking in. With our dependency on technology today coupled with our ailing infrastructure and a power grid that is basically temporary. 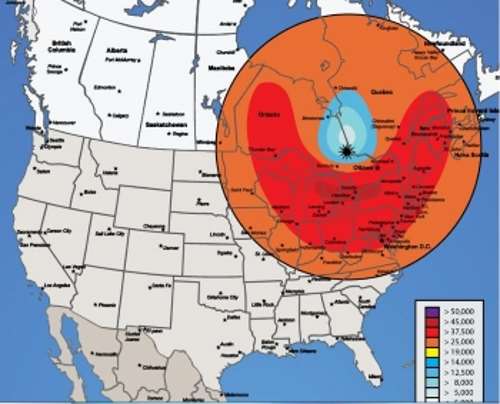 In this article from FutureScience.com they state the following about the power grid:

The fact that the electric power grid began as a convenience, but has become a necessity for sustaining life, is both one of the most beneficial, and one of the most dangerous, facts of 21st century existence.

We do not know how long the current power grid will last; but if it not replaced by a robust permanent infrastructure in time, hundreds of millions of people will die when the electric power grid collapses simultaneously in many countries.

How such a collapse occurs is very well known, and the methods to either prevent it, or to have spare transformers in place to fairly quickly repair it, are also well known.   Although these preventive measures would not be terribly expensive, they would take some time to put into place; and those things have never been done.

This is a great article and I will be siting it periodically in this article, it is pretty long so you might want to bookmark it, but it’s worth the read and has everything that you need to know about preparing for an EMP, the dangers and the Precautions you can take.

As you’re sitting there watching your favorite news program your TV suddenly shuts off along with the lights and everything else in the house. You grab your phone to check if you forgot to pay the bill, and that doesn’t work either.

You head outside and see that there is no power anywhere, the street lights are out, your neighbors are walking around looking confused and even the cars in the streets are not moving.

At this point you know that some sort of EMP caused this and you decide to check your car to see if it will start…Will it?

What is your plan? You’re not sure what caused the EMP but you know everything is about to get way out of hand and time is of the essence.

I recently posed this question to our Facebook group and the answers were fantastic and very enlightening. They ranges from going out and buying everything you can as quickly as possible to bugging in and finding out who is going to be with you, and who you should protect yourself against.

I will go into more detail about these responses in the next podcast, but for now lets talk about the difference between an EMP and a CME.

It’s important to understand that there is a difference between an EMP (Electric magnetic Pulse) and a CME (Coronal Mass Ejection) or solar flare. Both can do massive damage, but what they will damage is different.

A Nuclear EMP device is designed to deliver 100 to 200 Kilovolts per meter. This is a massive and destructive blast of energy but is more localized than a CME. The Maximum Electronic Destruction (MED) is shaped like a smiley face.

The geographic size of the MED is determined by the altitude of a NEMP (Near Earth Magnetic Pulse) detonation, and if you happen to be in the not so funny smiley face (Maximum Electronic Destruction zone) there is not much if anything you can do about it. From surge protectors to faraday cages, nothing will prevent total destruction of all electrical devices, your phone and your toaster will be toast.

Because most of us (hopefully) will live outside the MED zone Faraday cages and surge protectors are good to have to protect some of your more important electrical devices. The article from Future Science also goes through what makes a good faraday cage and other techniques to protect your electronics.

The dangers of a CME are the affects it will have on the power grid, and everything that will happen because of our dependence on the grid. Everything we do requires electricity in some way or another, from food getting to the grocery store, to fuel getting to the gas station.

The last (large) CME to hit the earth was the Carrington event back in 1859, Scientist estimate that this happens every 150 to 200 years. The Carrington event happened 155 years ago which puts us right in the danger zone, although in 1921 a large solar storm, of briefer duration than the 1859 event, occurred which affected a much smaller area of the planet.

Equipment Protection: Whether or not your electronics become fried really depends on the severity of the situation and whether it was a CME or an EPM. It’s always a good idea to at the very least have surge protectors installed and even you’re most important electronics stored in a faraday cage or electromagnetic shield.

Faraday cages are not absolutely necessary for solar flares, but it never hurts to be safe and store some smaller items like a shortwave radio, a tablet, phone or even an old laptop you have digital information stored on protected.

Check all Vehicles and Electronics: Check everything, Cars, phones, computers, lights, generators and anything you have that could be useful in the coming months and possibly more.

Take an inventory of your equipment including everything you have that is not electronic. What you actually have and what you think you have could be two different things. What you don’t have you will need to go out and get as quickly as possible.

Spend your money: This is a major reason for having cash on hand. The ATM’s will be out of order and everything you have in the bank will be gone for all intents and purposes.

Money will lose its value very quickly, and available supplies will disappear even quicker. It’s time to take advantage of being a prepper, you know more than the average person how this is going to turn out so get what you can while you can.

Your security Plan: Just about everyone who commented on the Prep Drill said they would bug in because there was really no benefit to bugging out. I tend to agree unless you have you bug out location ready to go.

If you do choose to bug in have a plan in place if things go from bad to worse. Having windows and doors locked and barricaded might seem like overkill in the beginning, but eventually the supplies will run out and so will everyone patience.

Make sure everyone in your home knows the plan and how to react to certain situations. If you have family in different areas have a plan for everyone to be in one place.

Fill Everything With Water: Take every opportunity you can to collect water, even if it means just the residual water you can get out of the pipes. Having water already stored is a good head start, but that water will only last so long.

This is an area we are lacking, we have water stored, but I still haven’t installed a manual well pump. I am currently saving the money to get an Earth Straw and I am hoping nothing like this happens before I get the opportunity.

A short wave radio could help if the entire United States grid was down and you needed to get information from other countries that were not affected.

HAM radio could be affective if you know the right channels and your equipment is unaffected. This is another area I am lacking in, I have my technician’s license, but I haven’t done enough to make this a valuable tool…I’m getting there.

Consider Hygiene issues: As the weeks and months go on trash and waste will become an issue. Consider what you are going to do with human waste, consider what you will do with the trash that piles up and consider what everyone else is doing with their waste and trash.

Bad hygiene and unsanitary conditions can lead to sickness and death, most people won’t even give this a second though until the smell becomes too unbearable to handle.

Work with your neighbors: I have read conflicting ideas on this, but it’s my opinion that if you can prepare your neighbors, they become less of a threat to you.

There is power in numbers and while you should not disclose everything you have, you should try to get a better perspective about what skills and resources your neighbors have and try to pull them to your side, rather than the dark side.

Most people will be scurrying around dazed and confused about the situation. These people will be waiting for the power to magically come back on. Underestimating the situation will be dangerous because it gives a false sense of security and the more action we take initially will help us down the road.

There are a lot of things we can try to be 100% prepared for, and a lot of things that regardless how much we prepare times are going to be rough. An electric grid failure is one of these things. The failure of the grid from an EMP or a solar flare will only be the first domino to fall, the events following will be chaotic and dangerous to say the least…but this is why we prepare right?

Make sure and read the article from FutureScience.com and also this one from HappyPreppers.com Both have a ton of information and will give you a better idea how to prepare for an EMP or CME.

What would you do?

Leave us a comment below about what your plan of action would be .