When disaster strikes, will you be ready? Will you be organized, calm, and ready to adapt to whatever the situation brings? Sometimes we have some warning, and sometimes things happen out of the blue. There is one simple secret that will allow you to sail through nearly any crisis. It doesn’t cost a lot of money, or take up an entire roomful of storage space. 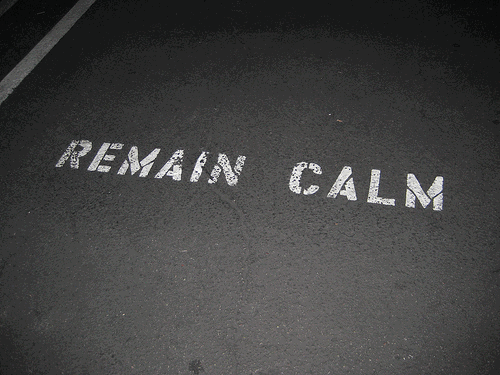 It’s your ability to accept the scenario.

The more time you spend denying that this could ever happen to you, happen in your home town, or occur at all, the less time you have to take definitive action. In fact, your willingness to accept that disaster could strike before it ever does puts you even further ahead, because you’ll be ready for immediate action without wasting valuable time wrapping your brain around it.

We recently hovered on the edge of evacuation for 12 days due to the King Fire , a forest fire that nearly reached 100,000 acres. We got up on a sunny Saturday morning, never realizing that would be the day an angry man would punctuate a domestic dispute by setting fire to a tree in the other person’s yard. Certainly, no one expected that one act of anger to set off a fire that would exceed the size of the city of Atlanta.

However, he did set that fire, and it came as close as 2 miles to our home over the almost-two-weeks that we watched with bated breath.
During the fire, I joined a number of local groups online so that I could get the most up-to-the-minute information, and during this time, I took lots of notes of my observations. The thing that was very clear is that those who were at least somewhat prepared handled the situation far better than those who simply couldn’t accept that this threat was actually happening to them.

As someone who has studied preparedness for many years, I witnessed firsthand the classic exemplar of human behavior during a disaster. Tess Pennington, the author of The Prepper’s Blueprint , wrote an article last year called The Anatomy of a Breakdown. In the article, she pointed out that in the event of disaster, society devolves in a predictable pattern with four distinct phases. Her observations were accurate during our experience. As we watched the events unfold, some people changed dramatically.

The difference between the people who crumbled, becoming easily offended, snarling, and hysterical, and the people who were generous, calm, and effective? Their levels of preparedness, both mental and physical.

Think about any stressful situation that has ever happened to you. Once you accepted the fact that it had happened you were able to set a course of action. Once you had definitive steps to take, you probably felt much calmer. You took control of the things you could, and you executed your plan. Only by taking that first step – accepting that this mishap had indeed occurred – could you take the next two.

No matter what situation you find yourself in, these steps will nearly always see you through.

Here’s what we saw.

During our own experience, here are the things I witnessed. They could apply to any type of disaster, natural or otherwise:

Bug out bags are absolutely the first prep you should make. If you’re just getting started, do this one thing. You can do it without spending a penny, by just gathering up things that you already own. You may not have a top-of-the-line, ready-for-the-apocalypse bag like THIS ONE but you’ll still be far ahead of most people. When we first learned of the fire and realized that evacuating might become necessary, I had only two things to do. I had to get documents from the safe (the documents, by the way, were already housed in a plastic folder, so I only had to grab that one thing) and pull the pet carriers out of the shed. In less than 5 minutes, we were ready to roll. Had it been necessary, we could have left with only the photocopies of the documents, because those always remain in our bug-out bags. Having your bug-out bag ready means that you have accepted in advance that disaster could strike.

Any time one disaster strikes, several more are sure to follow. This is highly probable.  Some people in the fire zone not only stayed on the edge of evacuation for nearly two weeks, but they also lost

power due to the fire. This greatly reduced their ability to get news and information, which is vital in a disaster situation. It leads to even more worry and stress, and while you’re dealing with the potential of your home burning down, you’re also living through a power outage lasting several days. Getting prepared for a two-week power outage is absolutely vital and can see you through most regional disasters. Also, when it finally began to rain, although it helped to quench the flames, firefighters were suddenly threatened by flash floods. These were made worse because the areas no longer had the same natural obstructions to deter the flow of water.

Unprepared people panic. Some people panicked initially. When we got the first evacuation alert (a notice that evacuation was highly likely within the next 24 hours), a woman who lived down the street was wailing and sobbing as her husband tried to pack up their vehicle. She was rendered absolutely useless by fear. Meanwhile, my 13 year old was fulfilling her list while I fulfilled mine and we quickly made an orderly stack of important belongings, then turned on a movie to beat the stress. Had our area actually been forced to evacuate, those who panicked would have either been the last to leave, or they would have forgotten important things as they left in a disorganized rush. It’s important to decide ahead of time who packs what, and for each person to have a list. Sit down well before disaster strikes and make an evacuation plan with your family.

Get organized. All the lists in the world won’t help you pack quickly if you don’t know where things are. One change we’re making is that all of the items we deemed precious enough to pack and take with us will now be stored in one area so that we won’t have to look for them when seconds count.  Another friend ran into the issue of dirty clothes: he actually had to evacuate with hampers of unwashed laundry. Having your home tidy and organized (and your laundry washed and put way) will help your packing go smoothly in the event of a sudden evacuation.

You can’t be prepared for everything. Disaster situations are always fluid and they don’t go by a script. It’s vital to be adaptable to the changing situation .

Keep your vehicle full of fuel. If you have to evacuate, lots of other people will be hitting the road too. When you’re stuck in traffic, you don’t want to be worried about your fuel gauge dropping to the empty mark, leaving you stranded in a dangerous situation.

The criminals come out, like cockroaches . Within 24 hours of the first evacuations, we learned that the local scumbags had looted some of the homes that had been left unattended. Within 48 hours, we learned that the scourge had reached the outlying areas, with these people breaking into cars that had been loaded up with the things that families had determined to be most important to them.  Of course, if you’ve evacuated, there’s nothing you can do about what’s happening to your home. But before evacuation, or in the event of civil unrest, it’s vital to be prepared to defend your family and belongings. In these situations, the first responders are busy, and that’s what criminals rely on. You should consider yourself to be completely on your own, and be ready for trouble. Keep in mind that during the civil unrest in Ferguson recently, the only businesses that didn’t get looted were the ones at which the owners stood armed and ready to defend their property .

The longer the stress lasts, the worse some people behave. As continued stress is applied, the true nature of a person becomes evident. People who formerly seemed like perfectly nice individuals were on the local message forums saying terrible things to one another. They were verbally attacking others for imagined slights and taking offense at things that would normally never ruffle feathers. Some folks were launching tirades against the very people who were performing the greatest service: the admins of the webpages who worked round the clock to keep us informed. If it was this bad in a potential emergency, can you imagine how bad things will get in a truly devastating long-term scenario?

But then…some people are wonderful. Alternatively, sometimes you see the very best of human nature. The generosity of many of my neighbors cannot be overstated. They housed livestock, pets, and families full of strangers during the evacuation. People showed up at the shelter with food and comfort items for those who had been evacuated. Firemen who came from near and far to fight the blaze were constantly being treated to meals at local restaurants, as other diners surreptitiously paid their tabs. Watching the kindness and gratitude helped to restore some of my faith in human nature, after seeing the squabbling and crime. It was interesting to me that the people who gave the most generously were the ones who were the most prepared. These folks were calm and could focus on other things besides “Oh my gosh, I don’t know what to do!” We definitely learned who the people were that we wanted to surround ourselves with when the S really HTF.

Take steps now to be one of those calm people later.

Today, I want you to think about disasters. It’s certainly not a pleasant thought, but considering these things now – when there’s no fire bearing down on you, no hurricane heading your way, no chemical spill poisoning your water, no pandemic in the next town over – allows you to think more clearly and make a definitive plan of action.

Check your bug out bags.

Organize your most precious belongings.

Discuss the plan with your family so that everyone knows what to expect.

Make these decisions now so that when – and it’s always “when” not “if” – disaster knocks at your door, you’re prepared to respond immediately. Learn about what to expect from others in order to keep your family safe and on-plan. Human nature isn’t as much of a variable when you can predict their behavior.

Here are the things we packed for our potential evacuation:

I can’t emphasize enough the importance of those sentimental items. We feared that if we had to leave our home, we might never be coming back. Identify the things that are dear to your heart and put them in a place where you can grab those treasures quickly. Insurance can’t replace photos of those who have passed on, special gifts, and items that bring you memories of loved ones.

Have you ever evacuated?

If so, what items did you take with you? Are there any items you forgot?