I was talking with a friend recently who was lamenting the worsening of his vision. His eyesight had been slowly getting worse over a long period of time. Finally, he couldn’t put it off any longer. He went to an optometrist and got glasses. Within a year of getting, his eyesight had worsened considerably. His eyes had become so used to the crutch that now he could hardly see without his glasses. 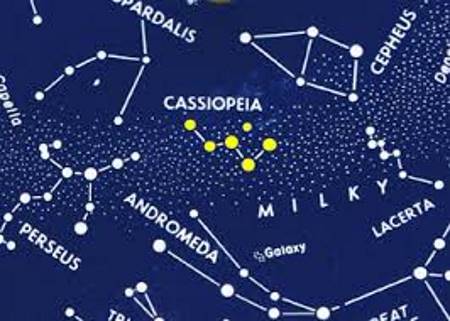 I think the same can be said about technology. Man’s ability to use primitive skills has greatly decreased over the past 30 years as the number of electronic gadgets has increased. Gas logs in the home and propane grills with push button starters on the back deck have made the necessity of starting a fire obsolete. Email and Instant Messaging has made letter writing an antiquated mode of communication relegated to formal events like wedding invitations and holidays. And GPS’s have made reading a map and using a compass a thing of the past.

Technical gadgets have come a long way over the past 20 years. They are better, faster, smaller, and more ubiquitous than ever before. Many new cars even have GPS’s built into the dash so you’ll never get lost on the highway.

However, devices can and will fail, often leaving you without a backup solution if you’ve failed to prepare or haven’t kept your skills up. That’s why it’s always good to have a fallback plan in the event of a technological failure. This is particularly important when in remote areas or camping.

While on extended hiking trips, it’s fine to carry a GPS is that’s what you’d like to do. However, as a backup plan, it’s a good idea to have a topographical map and an old fashioned compass with you. (More on how to read a map and use a compass in this post).

But what if you haven’t planned ahead? What if you don’t have a map and compass? What if you only have your God-given senses to rely on? Could you determine your approximate direction? In a prior post, I shared a way to determine North during the daytime using a shadow and stick method. That’s great, but what about at night?

In ancient Greek mythology, Cassiopeia was an extremely vain queen who was enamored with her own beauty. The Greek astronomer Ptolemy referenced Cassiopeia as one of the constellations visible in the northern hemisphere. And of course, it still is today.

If you look up on a clear evening, you may be able to see relatively bright stars arranged in the shape of a W. Depending on the time of year and the time of night, it may or may not be below the horizon for you. From our perspective here on Earth, it appears that the stars rotate through the nighttime skies. Only Polaris, the North Star, remains fixed during the night.

Polaris is not an extraordinarily bright star. Nor does it have any particularly identifying traits other 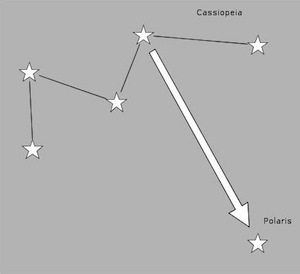 than it doesn’t appear to traverse the skies during the night. But being able to recognize Polaris is key to nighttime navigation since it points us to North.

Cassiopeia can be used lead us to Polaris. In the diagram,  can see that Cassiopeia roughly resembles a W or M in the sky, depending on where it is when you locate it.

If you draw a line that bisects the first of the two valleys of the W, that line will point toward Polaris, the North Star.

Keep in mind that this is not an exact science. It may be off by a few degrees one way or the other, however it is useful for providing general direction of travel.

As an aside, the angle between the northern horizon and Polaris corresponds to our latitude. So if you live in Chicago, Polaris will appear roughly 42 degrees above the horizon. Sailors of days gone by used a Sextant to determine their latitude by accurately measuring the angle. Pretty amazing.