It’s impossible to predict when and how our economy will finally reach a breaking point, but according to contrarian Shadow Stats economist John Williams  it’s coming one way or the other. 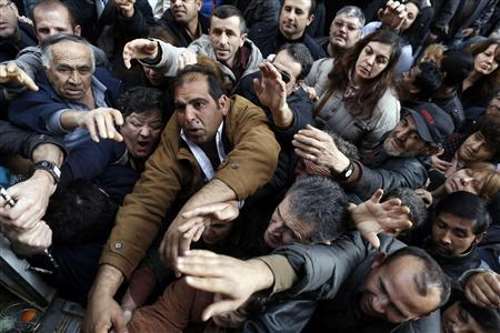 The only thing we can do now is to prepare for it and that means stockpiling critical supplies, just like you might for an earthquake or snowstorm, but in larger quantities.

Because, if and when hyperinflation starts people will quickly realize that their dollars are worthless. And as we have seen time and again, and most recently in Russia, when a currency rapidly loses its value the public will have no option but to panic buy everything that isn’t nailed down in an effort to unload their diminishing purchasing power before their currency is completely worthless. 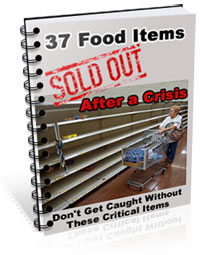 This means, as John Williams notes in the following interview with Greg Hunter’s USA Watchdog, that food and other essential supplies will disappear within a matter of hours.

If you have a crisis ahead of you the preparation, by definition, is something you do before as opposed to trying to scramble out after.

In terms of the inflation, holding physical gold and silver is a way of preserving the purchasing power of your wealth and assets.

In terms of buying stores of goods to live on… canned goods, toilet paper, bottled water… the disruptions to the system here early on could be just as bad as an earthquake in terms of shutting down electricity so you can’t pump gasoline, or getting distribution channels disrupted to grocery stores so that you can’t get food… You want to hold some of that in reserve to cover difficult times just like I do here in California anticipating a potential earthquake.

What we’re looking at here is a disaster just as bad in terms of the disruptive effects on people’s lives, but it’s man made as opposed to a natural disaster.

The challenge, of course, is knowing when it will happen.

As Williams highlights in his interview, we had almost no warning in 2008. People went home for the weekend on a Friday and all was well. By Monday morning the whole system was literally just days from a complete collapse that, as one Congressman warned, could have resulted in martial law and tanks on the streets of America.

Many of us were told in private conversations that if we voted against this bill on Monday, that the sky would fall, the market would drop two or three thousands points the first day, another couple thousand the second day, and a few members were even told that there would be martial law in America if we voted no.

Here’s the scary thing, as John Williams points out:

“People say everything is fine again—nonsense.  You had a panic in 2008… The system was on the brink of collapse.  The Fed and the federal government did everything in their power to prevent it. ”

“They pushed things into the future, but they didn’t do anything of substance to address the underlying problems.”

So, are we going to have another panic?  Williams says, “Yes, and that is the type of thing that can break at any time, and you just don’t have the options you had in 2008 for buying time into the future.”

In short, we are worse off today than we were in 2008 and all of the machinations by global governments and central banks have done nothing to solve the fundamental issues.

The question, of course, is when will the next leg of this broader depression take hold? When is the next crash coming?

According to Williams, there is no date he can provide, but he says that some specific events may signal that it is fast approaching.

Williams called for the beginning of hyperinflation sometime in 2014 but has now revised that prediction to 2015.

Williams says you will know hyperinflation is starting by watching the dollar.

“The first stage of it will be a reversal of the dollar.  We are not going to have hyperinflation until you see a massive decline of the dollar.  That will start the process.  You will see the flight from the dollar, and the Fed is going to have to absorb them.  That will be the trigger for the money supply growth within the system which will exacerbate the inflationary problem and the deficit problem and the funding problems.”

Greg Hunter: This is going to happen. I mean, this is not a maybe… It’s just a matter of when, not a matter of if. Is that correct?

I think the odds are higher you’re going to see it this year. But first the dollar’s got to break. The dollar right now is strong. The dollar has to sell off. You’ll see that, you’ll have some warning on that.

With the dollar at multi-year highs as of late it’s hard for many to imagine a scenario like the one being painted by Williams. However, as we know, the governments of China, Russia and other countries are already moving to divest themselves of U.S. dollars.

Being that we are undoubtedly involved in an economic war right here and now, it certainly makes sense that Russia and China will eventually move to crush the dollar. They’re not ready yet, but they will be soon.

This means that you should be actively preparing for what Williams has described as a real possibility in the immediate onset and aftermath of an attack on the dollar. Waiting until everyone realizes what happened could lead to horrific consequences for those who failed to prepare.