Rioting, looting, warlike mobs hell-bent on destruction – they are a staple of any Hollywood Post-Apocalyptic movie. They are also the unfortunate aftermath of many real world natural and man-made disasters.As I hope you have come to learn by now, no matter how tough you are, or THINK you are, the best way to deal with open conflict and violence is to try to avoid it at best, and be prepared for it at worst. During Civil Unrest or Open Conflict, the majority of deaths and injuries happen to people who are out on the streets – whether they are there to fight, loot or just stand in line for food or water. 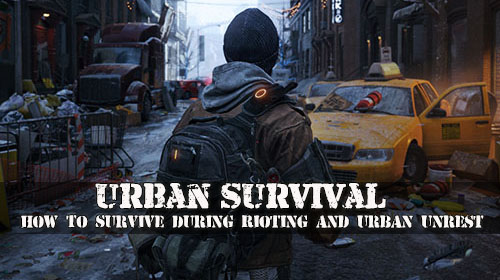 So Rule Number One has to be to stay off the streets as much as possible. In addition:

During open conflict, get away and stay away from areas of rioting. You can be in just as much danger from the rioters, as Police and Civil Authorities that have been sent in to quell the violence, who often cannot, or do not care to – distinguish rioters from bystanders. You need to be smart, use your head, don’t panic, and follow these specific tips and techniques to avoid being a victim no matter where you are. Be aware by recognizing danger. Have communication such as a radio, CB, or scanner. Use your senses. Panic spreads fast so when you feel threatened like your hair standing on end and the adrenaline working. Take action. Fight down the panic and stay calm. Avoid confrontation and try to go around potential problems. Have an escape route that you have selected ahead of time.

I highly recommend you to watch this free survival video that reveals 3 of the most important skills to overcome any disaster.

Act like the natives. Try to blend in so you don’t attract attention. Be careful of what you wear. Be aware of your surroundings. Learn to defend yourself. Choose an art that is compatible to your beliefs and skills such as karate, aikido, mace, pepper spray, guns or other weapons. Armed or unarmed the best way to win a fight is not to have one, but if you are forced to face trouble head on, you should resist with everything possible in a life or death situation. Don’t get involved in mobs or mob behavior. They become mindless and objectivity is lost.

I’ve served my country faithfully. I am and always will be a patriot. But I remind you of America’s history, and the fine line between “Rebel,” “Patriot” and “Minute Man.” I do not want to think of the day when active U.S. military may be called in to take action against American Citizens, but I cannot discuss “civil unrest” without also including a discussion about Martial Law. There have been plenty of rumors, and there are no lack of conspiracy theory websites, and the more “fringe” elements of Preppers that would have you believe that the agenda of the current administration is to grab power, and stay in power be invoking Martial Law . I do not buy into much of that – BUT you need to know that the Government has made plans to deal with what it believes to be mounting threats of violence and insurrection from “civil unrest.” In 2002 the federal government established a North American Army command.

This was the first time such a command was set up on US soil. Its purpose is not to repel foreign invaders. Under the guise if Homeland Security The United States Northern Command or US NORTHCOM was created for domestic operations.

In 1879 after the reunification, congress passed the Posse Comitatus Act (PCA), which stipulates that federal troops cannot be used on US soil for law enforcement purposes. Many believe that the creation of NORTHCOM was in direct violation of the PCA, and it along with the recently passed Insurrection Act (Title 10 USC, Sections 331-335), clears they way for “the president to use U.S. military personnel at the request of a state legislature or governor to suppress insurrections.” The Insurrection Act also “allows the president to use federal troops to enforce federal laws when rebellion against the authority of the U.S. makes it impracticable to enforce the laws of the U.S.” Now you may think, what’s the problem? In fact maybe its a good idea that the Army is ready to swoop in and protect citizens and restore order When the S*ht Hits the Fan. Maybe so, but do you really trust these people. I mean not the average GI Joe, I would trust him (or her) with my life — I mean the people in charge. Things have not gotten too bad in the U.S. yet.

There has been the occasional “Occupy” protest that got out of hand – but nothing the local authorities couldn’t handle. But, Europe has been a whole other story. Not long ago, France was brought to its knees by night after night of rioting. There it has become almost a daily occurrence for workers to hold their bosses hostage in hopes of winning economic concessions. Similar things happened in London where normal life and businesses were shut down by days of rioting, despite well-known “British civility.” It wouldn’t take much to push this country over the edge with rampant rioting that results in a government crackdown on civil liberties. When that happens, no matter what the original cause or location of the trouble, everyone will be affected. Effects might include travel restrictions, random ID checks, mass arrests, food and fuel rationing, controls on money and banking, roadblocks, and other harsh “emergency” or “for you own good” restrictions. In other words – Martial Law! Any level of civil unrest can lead to crackdowns, new regulations, and harsher police policies that can end up infringing on everybody’s freedom in the long run. But if it ever gets to the point of Martial Law – I hate to say it – then the government itself will be a far bigger threat to your well being than whatever the original cause of the clampdown was.

That means curfews, rationing of basic goods, and enforced relocations at best, confiscation of firearms and supplies, and summary arrest/execution by soldiers, SWAT teams and other Federal Enforcers at worst. You need to be prepared for that like any other disaster. That means following every thing I have said so far about food stores, water stores, home defense and staying off of the streets.

Beyond that here are a few helpful tips from someone who has been on both sides of Police Actions.

Not doing so will get you killed. Remember under Martial Law, your “rights as an American” are out the window. Failure, especially “willful and intentional failure” to comply will get you shot and killed without trial, or due process.

If you found this article useful and you want to add anything that I’ve missed leave a comment in the section below.

4 Replies to “Urban Survival: How To Survive During Rioting and Urban Unrest”