Whether you are prepping for the zombie apocalypse or the aftermath of a hurricane, self-defense is an important aspect of surviving any disaster. Everyone has their preference as to what qualifies as the best survival weapon. History has proven the rifle to be the best all-purpose firearm to face a variety of combat and self-defense scenarios. 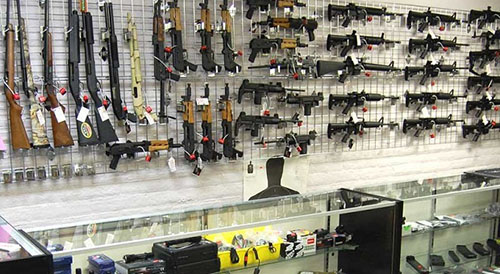 However, a rifle should only be part of what many preppers refer to as a layered defense system. It doesn’t matter if you are bugging out or sheltering, your need to arm yourself with a variety of weaponry, self-defense skills and training is the same. With that said, if you could have only one firearm in a survival situation it should be a quality rifle.

Though handguns and shotguns are also to be considered, a rifle will give you the most versatility for handling a variety of post-disaster needs from hunting to perimeter security. However, the options and varieties when it comes to choosing a survival rifle are nearly endless and even the most avid shooters and preppers struggle to choose a favorite.

1. AR-15 – The AR-15, which is manufactured by dozens of individual companies and comes in a variety of styles, is one of the most widely used rifles in the world. 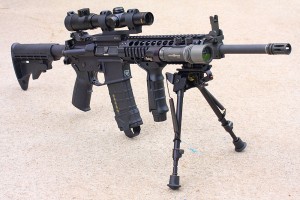 The semi-automatic AR-15 was designed by Armalite, who then sold the design to Colt in the early 1960s. The updated fully-automatic Colt AR-15 became the standard infantry weapon of the US Military and has since become a favorite in military, law enforcement, and civilian communities alike.

The AR’s popularity comes from its accuracy, reliability, and nearly unlimited levels of customization thanks to its modular design and two-piece receiver.  The rifle is capable of firing either 5.56x44mm or .223 caliber rounds, typically delivered from a 30-round magazine. Both Armalite and Colt still produce semi-automatic versions of the AR for civilian purchase, but other popular manufacturers include DPMS, Smith & Wesson, Remington, and Bushmaster.

One of the best start-up AR-15s for survival purposes is the DPMS Sportical, which will only set you back about $700. It’s a lightweight and ready-to-shoot carbine-style AR with a 16-inch barrel and adjustable stock capable of firing either 5.56 or .223 rounds. Like most ARs, it can be upgraded with an endless array of accessories to suit your post-disaster survival needs.

The rifle has seen action all around the globe and is praised for its ability to withstand use and abuse in nearly any terrain, conditions, or combat scenario. An AK-47 can be submerged in water or mud, go through a sandstorm, or fall off a cliff and still fire without fail.

That’s because unlike most modern-day tactical rifles, the 60-year old design of the AK employs loosely fitting moving parts that give it the ability to sustain abuse. The tradeoff is relatively mediocre accuracy, but a 30-round magazine of 7.62x39mm rounds should be more than enough to hit your target in a survival standoff. If not, the sheer intimidation of the gun’s appearance and rate of fire will be enough to send a clear message to your attacker not to mess with you.

Though AK-47 is commonly considered a “bad guy” gun, the stereotype attached to it in normal times may come as an advantage during a disaster. Basic models can be purchased for about $500, also ammo is cheap and abundant. AKs are great considerations for preppers on a budget who want to send a clear message to anyone who tries to harm them when SHTF.

3. M1 Carbine – Though it hasn’t seen active duty in combat since Vietnam, the M1 Carbine was for years considered to be one of the best combat rifles in the world.

Designed as a more compact and lightweighted version of the M1 Garand, a WWII infantry staple, the M1 Carbine was an incredibly versatile rifle that had high effect and tremendous accuracy, especially at mid-range.

To that effect, the M1 Carbine still serves as a great all-purpose rifle. The standard comes with a 15-round magazine of .30-caliber rounds, which aren’t the best for taking down targets at a distance, but serve their purpose at closer ranges and in hunting scenarios.

A modern take on the M1 Carbine, the AOM130, is available from Auto Ordinance for about $800. The rifle, made in the USA at Kahr Arm’s Worcester, MA plant, weighs in at just 5.4-pounds and features an 18-inch barrel and traditional walnut stock.

Unfortunately, the original models from WWII and Korea are getting harder to come by, which is unfortunate given the fact that even the old ones are still battle-ready anytime. However, .30-caliber ammo is becoming increasingly more expensive and harder to come across giving the M1 Carbine what is probably its only disadvantage as a modern-day survival rifle.

4. Ruger 10/22 – Some preppers insist upon arming themselves with the latest and greatest tactical firearms with the most firepower. Others believe basic is better and consider the .22-caliber Long Rifle (LR) to be the best and the only rifle you need to survive any disaster. If you subscribe to the latter theory, there are few better options than the Ruger 10/22.

Like most quality .22 LRs, the Ruger 10/22 is the perfect rifle for those new to shooting and a great starter gun for children and young adult shooters. The .22-caliber rimfire ammunition doesn’t deliver any kickback or recoil, but can hit targets at 100-yards with deadly precision and ease. The carbine-style rifle comes in stock with a 10-round rotary magazine that sits flush with the stock of the gun, helping to give it a lower profile and more comfortable carry.

One of the biggest advantages of a .22-rimfire long rifle is the abundance and affordability of ammunition. This will allow you to enjoy endless days of target shooting before SHTF and the opportunity to stockpile plenty of backup rounds to have on hand when disaster strikes. Fortunately, ammo costs shouldn’t be much of a concern to begin with, as the gun itself will only set you back a couple hundred bucks. From there you can customize and accessorize your Ruger to suit your specific survival needs.

5. Marlin 1985 GS – If you want a compact rifle with big stopping power that will take down nearly any type of game in any kind of whether, look no further than the lever-action Marlin 1985 GS. Despite the appearance of a menacing big-game hunter, which is indeed, the 1985 GS only measures 37-inches overall and weighs just 7-pounds. 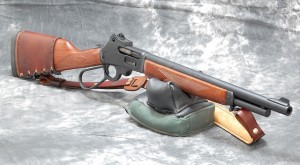 At 18.5-inches, the barrel of the gun is only slightly larger than a carbine-style rifle, but the .45.70 Gov’t issued rounds over stopping power unlike most guns of its size. Whether you’re up against a mob of angry looters, zombies, or a wild bear, the Marlin 1985 GS will have no problem mowing down anything in its path.

In addition to its sheer stopping power, the rifle classic employs a classic walnut and stainless steel design that’s both aesthetically pleasing and practical for battling against corrosion in rough weather. The rifle starts at about $650, a reasonable price to pay for a rifle that’s guaranteed to put food on the table and stop enemies in their tracks when the going gets rough.

6. Henry Arms AR-7 – The term “survival rifle” was originally designated for those guns designed to be carried in the cockpits of military aircraft when a pilot was shot down in enemy territory. 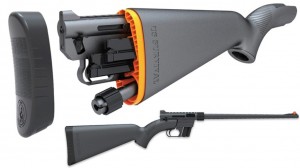 The gun needed to be compact, lightweighted, and capable of taking down both wild game and enemy combatants with reliability and accuracy. To that tune, the US military adopted the Springfield Armory M6 Scout as their rifle of choice for aircraft pilots. This collapsible gun featured two barrels that shot both .22 LR and .410 shotgun rounds giving it added versatility.

Though the Scout could still be considered a good survival rifle today, a more modern take on the survival rifle can be found in the form of the Henry Arms AR-7. The AR-7 weighs a mere 3.5-pounds and measures just 16-5-inches when broken down, making it ideal for concealed carry in a bug out bag, vehicle, or even underneath your jacket.

The rifle comes with two 8-round magazines for chambering .22 LR ammunition, which is one of the best and most readily available all-purpose survival rounds. The gun will only cost you about $280 and can serve as either your primary or backup survival rifle.

The rifles featured above by no means constitute a comprehensive list of the best all-purpose survival rifles. There is a nearly unlimited array of options to choose from, each of which have their advocates and serve various needs in the military, law enforcement, hunting, and target shooting community.

If you want to have the best chances of surviving a disaster scenario you must equip yourself with a firearm that you feel comfortable shooting at both two-legged and four-legged targets to protect and provide for yourself.

The selections above were chosen for their popularity, versatility, affordability, and ability to be handled by shooters of all levels. The choice comes down to you, but in the end the best survival rifle is the one you have with you, the one you have ammo for, and the one you’re trained to shoot effectively.

This article has been written by Cody Griffin for Survivopedia.